Slow And In Control: Reap Max Benefits From Your Lifts!

I first started lifting weights at the age of twelve. I was lucky to be given the chance to work with the gym's trainer. He trained me for nothing, all I had to do was show up during his hours, pay attention, and work my hardest.

I continued to work with my trainer, Ron, for about three years. I would show up at five in the morning if I had to, so I could work out with him before school. I never had so much discipline for anything, lifting gave me a way out of what ever was going on at that time.

Anyway, one thing that I learned from Ron was this: when lifting, you have to go "slow and in control." He probably told me this about a hundred times during my workout. He was like a parrot, repeating it over and over. I can still hear him in my head today, even though it has been about five years since I've last seen him.

He never explained to me why I had to go "slow and in control." I figured it had to be so I wouldn't get hurt, even though I felt more pain from the burn going slow then I ever did going fast. He was so strict about it that if I went too fast he would make me do the rep over, sometime this happened a couple of times during a set.

However, after the three years of working with him I had it programmed in my head. I began to go "slow and in control" all the time without having to worry about anyone telling me. I began telling others the same, and yes, I often sounded like a parrot. 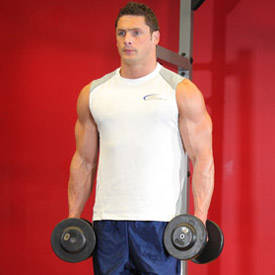 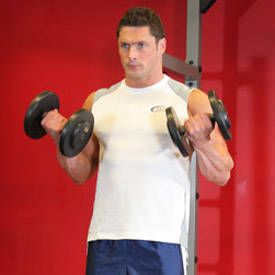 So those of you who lift the weight up and drop it quick are 1.) Risking serious injury to yourself and 2.) Not getting the full benefits out of your lift.

"Slow And In Control" In Life Outside The Gym?

Here's a short story for everyone. A guy "Marty" goes to a house late at night with a buddy of his to collect something from the people living in the house. You pick the collection item, drugs, money, or anything else you can come up with. Anyway, "Marty" brings a baseball bat because he knows they are not going to give up the item without a fight.

Marty's friend gets to the door and knocks on it. The guys in the house see who it is and come out fighting. Marty is standing on the side of the door and as the second guy runs out Marty hits him upside the head with the bat. They get the item they were looking for and drive off.

The police are called and they find Marty and his buddy a few hours later, then arrest them both. The next day the guy who got hit in the head with the bat dies. Marty and his friend are now murderers and a year later are sentenced to eighty years in jail each. Charges ended up being manslaughter, robbery, and possession of an illegal substance.

Marty also had two previous convictions for the same type of deal. Lets just say this didn't help him with his conviction.

This story has nothing to do with working out, but I feel Ron taught me more about being "slow and in control" then he ever wanted to. Ron is Marty, or Marty is Ron, however you want to look at it. When he was sentenced I wanted to cry. It was like losing a family member.

He showed me a sport that today I still love, and will continue to learn about so I can help others. Ron didn't just show me how to workout in the gym, he showed me how to work in life. How you need to slow down and get in control of situations that come your way. When I go to the gym I go with focus and any anger I feel I let it out. I work myself as hard as I can so when I leave the gym I am relaxed and ready to think before I react.

Maybe if Ron would have done the same thing he would still be free today, able to help others like he helped me.