Recent research has uncovered a hormone that has gone unnoticed until now. Find out what Ghrelin is and why there is so much hype about it!

For decades scientists and metabolism experts around the world have been singing he same tune. Weight loss comes down to calories. But anyone who has been on a diet can tell you it isn't that easy. The more you diet, the harder it gets! Sooner or later you aren't losing anymore weight and you are always hungry. If the theory were correct, that should never happen. What is the problem here? Well we may have an answer! 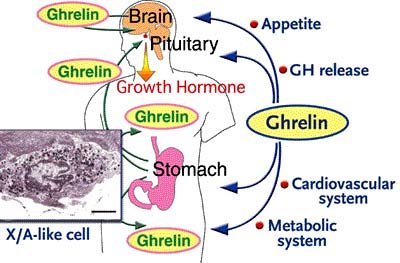 Recent research has uncovered a hormone that has gone unnoticed until now 1. Ghrelin is a hormone that is secreted by the stomach. It appears to have to primary functions as far as they can tell. The first being hunger. It is part of what makes us feel hungry or satisfied. And interestingly enough it is released in a time dependant manner. Right around "meal time" it is released and signals us to eat. Did you ever wonder why you can tell when it is lunch time without a clock? Well now you know.

The other and lesser understood mechanism of weight control seems to be regulation of metabolic rate. As we lose weight, resting levels of Ghrelin increase, making us feel more hungry all the time and reducing caloric expenditure. This would put some credit to the "Set Point" theory. The set point theory states that your body has a weight that it likes to be at and will fight to stay there. It is really hard to believe because we can put on weight like there is no tomorrow and on average, we gain a pound every year after 25 years of age.

A recent body of researchers realized that people who have had Gastric bypass surgery would lose massive amounts of weight and keep it off. This procedure has over an 80% success rate. That is UNHEARD OF when it comes to weight management therapies. Why would this be they asked. So in they set out to find the answer.

An interesting study 1 compared a number of groups consisting of lean and obese people to obese people who had recently had gastric bypass surgery. The put them on a low calorie diet and assessed Ghrelin levels throughout the study. As expected, the general trend was to see these levels rise over time. However, the people in the gastric bypass surgery saw absolutely no change in levels at all. In fact they were almost non-existent!

This sounds great and could be a potential cure for obesity. But something like this happened a long time ago with another hormone called, Leptin. Leptin is released from fat cells and plays a key role in fat metabolism. This was supposed to be the best thing next to liposuction, but there was one major problem. Obese people had a sever resistance to Leptin, and that would explain why they have such a hard problem losing weight.

But how do we modulate Ghrelin levels? We can inject it, that would just make us more hungry. Well lets think about it. All hormones work on a feed back loop. Something triggers its release and something stops it from being released. Could we find what stop Ghrelin and inject that to kill hunger? Yes we could! And it has been done.

Yet another hormone has been found to be secreted from the stomach that is secreted in response to food ingestion. Peptide P YY3-36 has been found to blunt Ghrelin secretions which creates lower appetite and reduces food intake. This could be a very good reason as to why eating smaller more frequent meals is so effective for weight management. And not as you can guess, lean people produce more of this hormone than Obese subjects. It would appear that Obesity is even more of a metabolic disorder than we thought. It goes just beyond self control and will power.

This study didn't not assess long term weight loss, but only caloric intake for a single day. The groups who were injected with Pyy ate significantly less, even when posed with an all you can eat buffet. So this is a very promising finding when it comes to treating obesity. But I'm sure you can see the potential for bodybuilding circles, especially in the competitive ranks. A drug that will make dieting painless!

Now I'm doing this simple write up of he research because I want you to be aware of what is up and coming. This is a fresh find for supplement companies. I can see it now, guaranteed fat loss with out going hungry! That is a multi-billion dollar scam waiting to happen. So let's go over the facts. We know that there is a correlation between increased Ghrelin and hunger. We know that dieting and weight loss increase Ghrelin levels.

P YY is a hormone that acts as a "Negative Feedback" mechanism to stop Ghrelin secretions and thus killing hunger. The research is all on inject able hormones. Nothing from a plant, or trees. Nothing that you can take orally or subcutaneously (skin). No pills powders or anything like that. It isn't even available for prescription or even classified as a weight loss drug.

IF YOU SEE A GHRELIN/P YY SUPPLEMENT... SKIP IT!

In college I put on a few extra pounds of fat. So I decided to get back into the gym, and it lit a fire under my ass.