Robert Downey Jr. prepares for his star role in Iron Man! How did he do it? Well first off, like any motivated individual, Downey decided to use a fitness professional... Here are the details of his 5-day split training program!

Is it a bird, is it a plane... no it's Superman... wait a minute, that's the man of steel. It's Iron Man we are interested in, and yes, the movie industry finally made one of Marvel comics' top super heroes into a big screen summer blockbuster. But what movie tough guy is playing the role? No, it's not our beloved Arnold, nor is it Stallone or even Dwayne "The Rock" Johnson, but a former drug abuser and jailbird.

A guy that seemed to have thrown it all away, never one to have been thought of as a tough guy or super hero character. But Robert Downey Jr. seems not only to have turned his life around and kicked his bad habits, but by becoming a motivated member of OUR iron culture, he has transformed himself into an on-screen super hero, a true man of iron. 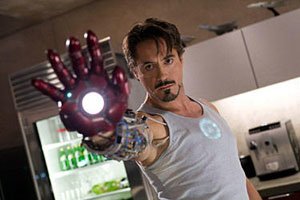 Click To Enlarge.
He Has Transformed Himself Into An On-Screen Super Hero.
© 2007 Paramount Pictures.

Anyone who hasn't been living under a rock for the last 100 years knows who Downey is, either through his endless list of movies that he has starred in or simply by his bad behavior, which landed him in prison.

For his role in Iron Man, which is now in theaters, Bobby J. (he likes us here at Bodybuilding.com to call him that, makes him feel homely!) recruited the help of a fitness professional.

Maybe it was the effect of playing Tony Stark (The man that is Iron Man and coincidentally also a man battling substance addiction and other problems which mirror Robert Downey Jr. in real life) that motivated his decision to get some outside professional help. And as we can see from recent interviews and the movie trailers, it has paid off!

So how did he get in shape then? Well first off, like any well-motivated individual, Downey decided to use a fitness professional, which helps to avoid making mistakes and aids in getting faster results. 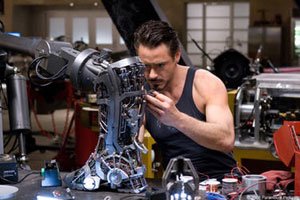 Click To Enlarge.
Downey Decided To Use A Fitness Professional.
© 2007 Paramount Pictures.

His training program consisted of five days per week of weight training coupled with an intensive martial arts program; there is no point being a super hero unless you can kick some bad guy arse! (Yes I said arse and not @SS, I'm Irish, get over it!)

Playing the role of arms manufacturer, Tony Stark, was just the motivation Downey needed to forge some guns of steel of his own and develop that physique of iron; Iron Man was coming. 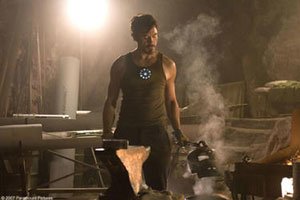 Along with his 5-day weight training program to bulk up for his role, he gained more than 20 pounds of muscle. Downey decided to go down the supplement route, using a creatine supplement created in Sweden, and as a sport scientist I would just like to point out that creatine is creatine no matter how you look at it.

What makes one better than the other is what it is mixed with to maximize the efficacy of the supplement as it travels through the digestive system to the blood stream. And of course, the Swedes have created that great carbohydrate, Vitargo, and when used with creatine yields some amazing results. Now you're talking about a stack that is worthy of super hero status.

As we all know lifting weights and throwing punches at a bag is not enough to get you into that super hero condition one needs to be in when being viewed by millions on the big screen. So how did Downey fine-tune that Iron Man body?

Well first off, as part of his cardio at Anatomi Gym in Santa Monica, Downey used what is called "Jacobs Ladder," a unique climbing treadmill which utilizes all of the muscles of the upper and lower extremities, truly an all-around fat burning workout. 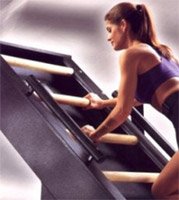 The idea here is to maintain a fast and steady pace, monitoring the heart rate to keep within that optimum fat burning zone, approximately 65% of one's maximum heart rate.

Maximum heart rate is 220 minus your age. A point to note while using this machine is to keep the core tight, as this helps maintain balance on the apparatus and also a sleeker looking midsection. The ears, shoulders and hips should all be inline!! Come to think of it, I wish my gym had one of those. And at a mere $3.5k one is yours, plus S&H of course!!

Click To Enlarge.
A True Man Of Iron.
© 2007 Paramount Pictures.

The five-day split is a great tool for gaining mass while also trimming that excess body fat. It allows you to focus on one body part per day, and minimizes the time spent in the gym.

During this type of split, basic compound movements should be used, such as the Bench Press for chest, the Deadlift or Power Clean for back, Squats for legs, Military Press for shoulders and Barbell Curls with French Press for arms.

The short gym time allows for the increased time for other activities, which in Bobby J's case, is his martial arts.

This is a great fitness tool to utilize to increase flexibility, stamina, agility, and most importantly, help the practitioner stay mentally focused and centered. So whether you want to be an Iron Man or an Iron Maiden get the lead out and start pumping the...

Weights... Ha-ha-ha, I bet you all thought I was going to say Iron! 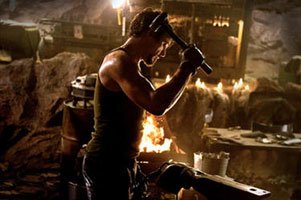 Become Tony Stark For A Weekend
And Live Like A Billionaire In Las Vegas!

Can't wait to get to the theatres to see Iron Man? Well to tide you over we have webisode featuring MTV's "Made" series. If you ever wanted to find out how to live like Tony Stark or get a glimpse at his fabulous life, check out this webisiode and then jet on over to the contest sites at www.ironman.mtv.com or www.ironman.vh1.com!