Froning prevailed in 2011, but it’s a new year with new challengers -- and challenges. We’ve got 5 of Rich's workouts in honor of the 2012 Reebok CrossFit Games.

CrossFit is the ultimate amalgam of fitness and athleticism.

We've got 5 of his most brutal 2012 workouts. They're deceptively simple and incredibly intense. Think you can keep up? 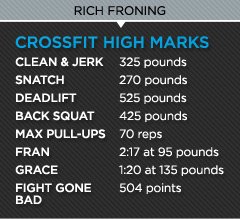 Rich's workouts are intended to create the ultimate CrossFit competitor - not a specialist, but a jack of all trades.

Rich writes Bible verses in his shoes before competitions for motivation. The challenge brings out the best in him -- the consummate competitor, salivating for victory. It doesn't matter what he's doing; he plays to win.

Rich believes CrossFit has perfect carryover to real life, perhaps unlike other sports. "In life," Rich says, "you don't really know what's coming at you. Like a firefighter, or police officer, or anyone else working in the emergency field, they don't know what's going to come at them. You gotta be ready for anything."

If his work ethic, workouts and strength are any indication, Rich is definitely ready.

"We don't just do gymnastics, powerlifting, weightlifting, mono-structural (running, biking, rowing, swimming)," Froning says. "We mix all those facets of fitness together and either come up with a circuit, or just try to get as good as we can at certain things without lacking in other areas." 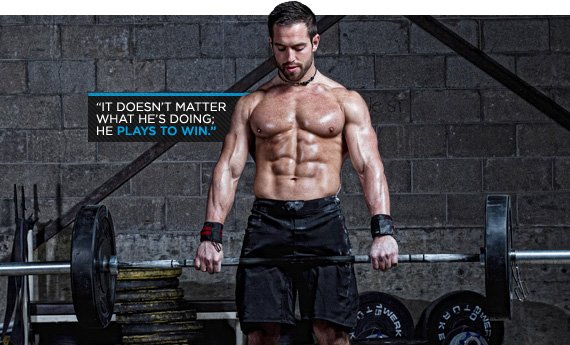 Froning clearly isn't lacking, but this is the largest field of competitors in CrossFit history. He must improve his scores from last year to again wear the crown. His toughest competition may come from former winners Jason Khalipa and Graham Holmberg, and challengers Dan Bailey and Neal Maddox.

In case you're unfamiliar with the Games, the events are not announced until just before they begin. This helpful page shows you what's known and unknown leading into the competition.

When and Where to Watch