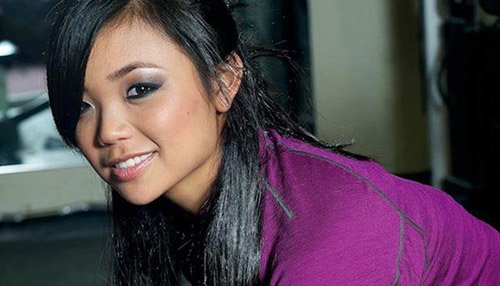 I've spent a good chunk of my life trying to be, in a word, "lean." In fact, I spent about 10 years straight working—largely unsuccessfully—toward attaining a rock-hard physique that I could sport year-round.

Along the way, I made countless mistakes: I overrestricted calories. I went nuts on cardio. I vowed to never allow myself to enjoy my favorite treats again. For whatever reason, I'd convinced myself that all of these things could be sustained for the remainder of my days. Boy, was I wrong.

Here's the thing: As much fun as it may be to watch your measurements drop week after week, at some point your body stops cooperating. We're not meant to be in a caloric deficit for long; our bodies actually have multiple mechanisms to protect against that. Dieting is also incredibly fatiguing, both on the body and on the mind.

Ironically, it wasn't until I quit dieting and obsessing over my progress—or lack thereof—that I was finally able to maintain a lean physique throughout the year. I stopped fighting against my body and took a shot at reverse dieting, a process by which calories are slowly increased over a long period of time. The primary goal of this method is to bring your impaired metabolism back up to speed, but it also offers a host of other benefits that can help you both in and out of the gym.

You need to have this technique in your toolbox. Here's why!

Reverse dieting is a technique that smart physique competitors have used for years to recuperate after their shows are done. If this is your first time seeing the term, you might just think it means "eat more," but it's more nuanced than that.

Reverse dieting doesn't mean you should down bagels with gobs of peanut butter until you no longer feel deprived. Rather, you increase calories strategically, usually to the tune of 80-100 per week, and then slowly move upward after that.

Why is this rate important? If you've ever switched overnight from caloric deprivation into an extended smorgasbord, you probably know why it's crucial to increase calories slowly.

Your metabolism is super low after something as strict as a diet or contest prep, and strapping on the feedbag can lead to some serious fat gain in a short period of time. Reverse dieting, on the other hand, can help you experience some long-earned hypertrophy without having to hide in your off-season sweatpants.


Double meat chicken breast salad with vinegar + oil from Subway while on the road to Myrtle Beach ????????I never stress out about eating away from home because I trust that I have all the tools I need. I don't have to control every single thing that I eat. I don't even need to always have a stash of protein or physique-friendly snack with me. Instead, I make the best choices I can while I go about my day. I refuse to allow my life to revolve around my diet; it's the other way around now. ????


So does this mean that only competitors and other extremely lean people can benefit from a reverse-dieting approach? Definitely not. A reverse can work great for anyone who falls into one or more of the following categories:

Reverse dieting has been found to help repair metabolisms that have been damaged from chronic dieting, but even if you've never used the D-word to describe what you do, you should still know about it. Here's how it helped me.

Benefit 1 It allowed me to eat more

This may sound simplistic, but if you've ever been tied to a restrictive dietary scheme, you know what a relief just a few more calories a day can bring. Suddenly, there's no more constant worrying about when and where your next meal is going to come from. You can attend a social event that will have food or drink, rather than stay at home because it would tempt you to deviate from your airtight program. 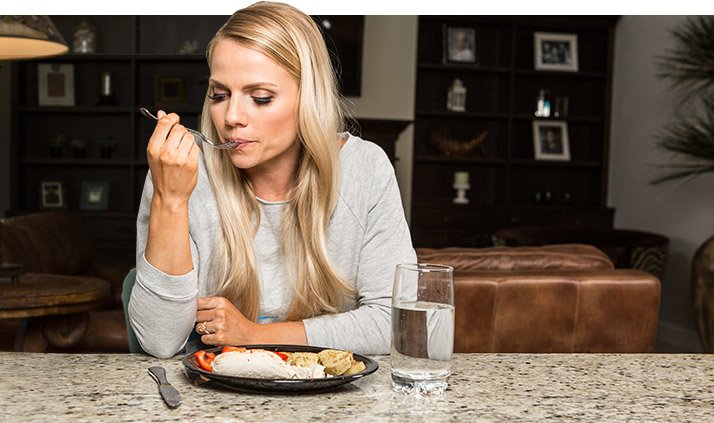 This may sound simplistic, but if you've ever been tied to a restrictive dietary scheme, you know what a relief just a few more calories a day can bring.

"Living the lifestyle requires sacrifice," you tell yourself in the heat of battle. But after a while, living in a deficit while training hard inevitably wears you down. Once I began reverse dieting, life wasn't about deprivation anymore. Instead, I had more freedom to relax when it came to food quantities, and that, in turn, helped me to think less about food.

By nipping a craving in the bud, even in a small way, I was then able to easily move on with the rest of my day instead of having my thoughts circulate ad nauseum around that one treat I was denying myself. I also didn't have to cry about my measly portion sizes or lament the lack of full-fat cheese I could afford on my program. I could eat to the point of satisfaction and be done with it.

To someone who has been living and training in a deficit, more calories means more energy. All of a sudden I wasn't dragging my feet around all day. I wasn't distracted by hunger pangs or fatigue, and that in turn gave me the drive to approach my work—as well as my relationships with my fiance, friends, family, and dogs—with extra gusto. 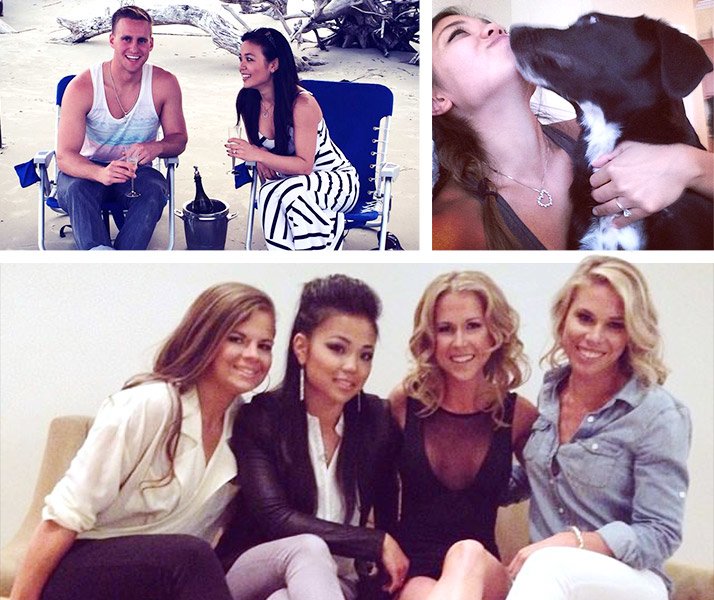 I wasn't distracted by hunger pangs or fatigue, and that in turn gave me the drive to approach my work—as well as my relationships with my fiance, friends, family, and dogs—with extra gusto.

Mentally, the transformation was even more pronounced. More carbohydrates meant more glucose, which meant more willpower to seize the day and get tasks done. Not only that, but the very fact that I wasn't thinking about food around the clock freed up an incredible amount of mental space to give my all new projects.

I became more patient, more open-minded, and more focused. I found myself in a better mood, and I was much more pleasant to be around. In short, I felt like myself again.

Benefit 3 It pulled me out of the dieting mindset 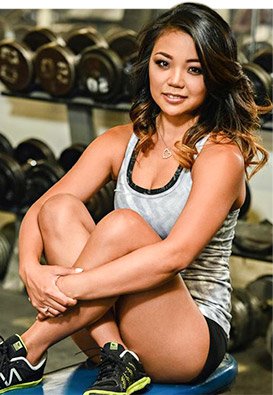 After dieting for a long time, I was afraid to stop. I thought that, without that caloric deficit, my weight wouldn't go down. And if my weight didn't go down, then clearly everyone would think that I was:

Those remarks never came. They were all in my head. To the contrary, my friends and family expressed relief that I finally allowed myself to enjoy food with them. Of course, it really wasn't about the food so much as the fact that I was able to break bread with them—literally—at the dinner table and share a common experience. That was what I had been missing.

I have since learned that the only person who truly gives two hoots about my size is ... well, only me. It wasn't until I began to truly understand this that I was able to heal my relationship with the scale.

Before, my body was merely a vessel for showcasing my fat-loss efforts. I viewed it as little more than a mannequin that manifested the amount of body fat I was carrying at any given time. When I trained, my sole purpose was to burn calories—the more, the better. When I sprinted, I actually imagined my fat cells burning to a crisp.

At some point, this single-mindedness took the enjoyment out of exercise. I viewed it as merely a means to an end, and I found myself simply going through the motions. 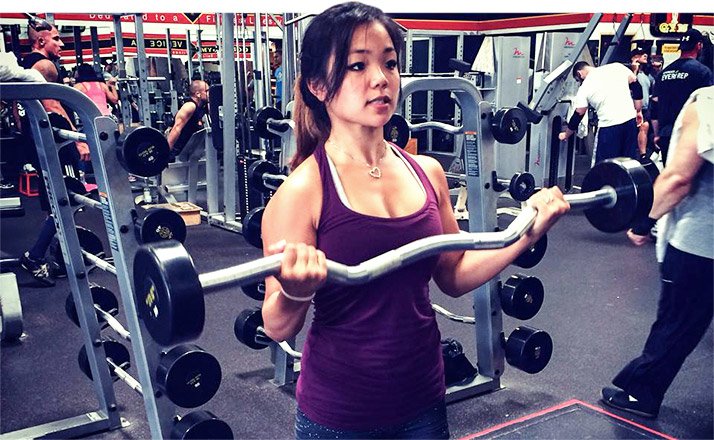 Give your body the fuel it needs, and it will reward your hard training with muscle.

With the boost of energy I received from reverse dieting, I realized that I hadn't been giving my body enough credit. I saw that I had the strength to bang out multiple bodyweight pull-ups, I could easily carry heavy grocery bags up the stairs on my own, and I could pick up my dog with ease. In short, I saw that I had been building strength, but not allowing myself to experience it.

Soon enough, this realization helped me switch my goals from calorie-burning to strength-building. As other figure-focused women have discovered, training for strength is way more fun—and when you're well-fed, it can be far more effective at helping you stay lean than training solely for fat-loss. Give your body the fuel it needs, and it will reward your hard training with muscle.

You deserve to experience the full range of benefits that your training has to offer. Let some calories back onto your plate, and watch as the quality of both your workouts and your life soar!