Pilonidal Cysts: What You Should Know!

A pilonidal cyst is a sac under the skin at the base of the spine located in the opening between the buttocks muscles. Learn what it is and how to treat it!

Note: The information on this page is for educational purposes. It is the opinion of doctors and professionals and is presented to inform you about pilonidal cyst and surgical conditions. It is not meant to contradict or replace any information you may receive from your personal physician and should not be used to make decisions about pilonidal surgical treatment. Commentaries by post-op patients reflect individual experiences and not meant to be used to replace medical advice or recommendations.

What You Should Know!

A pilonidal (PIE-low-NI-dal) cyst is a sac under the skin at the base of the spine located in the opening between the buttocks muscles. It looks like a small hole, often with a few hairs coming out. A pilonidal cyst is a minor abnormality that occurs during fetal development. Infection is usually caused by staphylococcal bacteria. If infected you may need an antibiotic to fight the infection. Your doctor may have to open the cyst to drain the pus, and may need to remove the cyst surgically. See below. 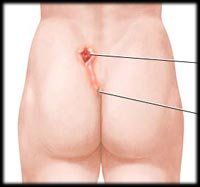 Pilonidal disease has a male predominance and usually affects patients from the mid-teens into the thirties. In the U.S. pilonidal disease affects 26 cases per 100,000 inhabitants and occurs 2.2 times more often in men than women. This seemingly minor disease process has physicians baffled, as demonstrated by the multiple theories of its etiology and management found in the current literature.

The term pilonidal (pilus-hair, nidal-nest) was coined by Hodges in 1880. As the name suggests, pilonidal disease consists of a hair-containing sinus or abscess in the saccrococcygeal area. For a time, the entity was referred to as Jeep rider's disease. It hospitalized over 80,000 U.S. army soldiers during WWII, accounting for 4.2 million sick days. Much of the information we have about the disease comes from the military.

After the infection is cleared, a day surgery procedure to remove the cyst is performed. The cyst may be a simple abscess or may be draining from sinus tracts that need to be closed. The process of raising the borders of the emptied cyst and stitching them to form a pouch is called marsupialization.

The interior of the pouch then empties the collection of pus and gradually closes. Several weeks of packing the pouch with gauze is needed to collect the pus while the pouch closes. There are several treatments for pilonidal sinus, and some controversy over which is the best; none is well studied:

Surgical Treatment and Post-Op Recovery - Symptoms and side effects of this disease and post-op treatment will vary from one individual to another. Modifying diet and using a laxative & pain reliever should not be used to replace medical advice or recommendations for another individual. Warning: Consult with your physician first before making any modifications in your post-op treatment previously prescribed.

Information on compiled excerpts above on what pilonidal is, it's history and treatment is derived from the following resources below by individuals, organizations, institutions and internet sites:

Hoping my story can help you can get through your pilonidal experience!

Randy Herring is a certified personal trainer with over 20 years experience.