They don't make good workout partners, but these beasts are delicious! Learn all you need to know about being the world's keystone predator.

As a red-blooded alpha human, are you missing a trick by only eating proteins from herbivorous (vegetarian) animals? Tuna and salmon are some of the most common protein sources you'll find on an athlete's dinner plate. That's largely because the flesh of these predators has more protein and omega-3s than almost any other fish in the ocean.

However, does the same logic hold true for the rest of the animals at the top of the food chain? Be warned, some of this information might be hard to digest, but the rewards may help separate the winners from the losers. Get ready to broaden your taste buds, if you dare.

The undisputed kings of the waterways have made a few meals of humans, but it doesn't have to be a one-sided affair. As little as 100 g of alligator meat has 232 calories, but packs an astounding 46 g of protein. 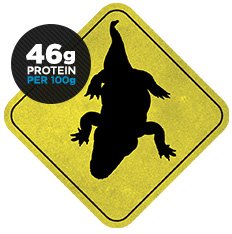 Its cousin, the crocodile, might be larger, but isn't quite as impressive with 100 g fielding 29 g of protein and 186 calories. Both are excellent low-fat, high-protein options for an athlete looking to drop body fat or preparing for a weigh-in.

All you have to do is get used to the taste, which is commonly described as fishy-chicken. Use it in any recipe that calls for veal, seafood or chicken, such as the one here. 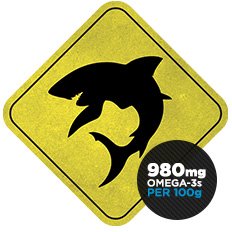 Shark fin soup may have contributed to the demise of our oceans' top predators, but they have been able to bite back. Research at the University of Miami discovered that shark meat has high concentrations of BMMA, a neurotoxin linked to neurodegenerative diseases such as Alzheimer's and Lou Gehrig Disease.

What's more, 100 g of shark meat has just 21 g of protein, so it's certainly not a nutritional juggernaut, but it does have 980 mg of omega-3 fatty acids. Fish shops can be tricky and try to sell it under different names such as flake, lemon fish, or ocean fillet, so make sure you ask exactly what it is before you tuck in because it could cost you in the long run. 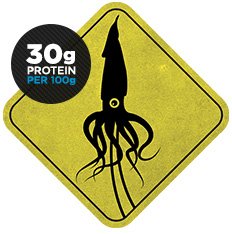 Cast your mind not to the 50-foot giant squid, but to their smaller, less threatening cousins. If you need oomph for a grueling workout, then snack on this often-forgotten protein source. Just 100 g will give you 30 g of protein and six times the RDA of vitamin B12, well known for its energy-releasing qualities.

"It's also very rich in antioxidant selenium which will mop up the free radical damage incurred during training," says sports nutritionist Matt Lovell. It is slightly high in salt and just 100 g will take up 32 percent of your cholesterol allowance, so stick to having it once or twice per week. It's usually served battered and fried but there is a healthier way to eat it using the recipe here.

*Warning: Overcook it and it'll taste like a giant squid would: a tire! 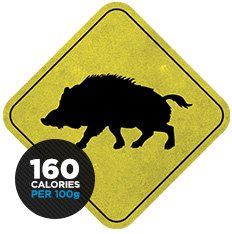 While boars technically are omnivores (eat both meat and vegetables), they deserve a mention thanks to their predatory nature, especially toward anyone who stands in their path. But do they stack up nutritionally?

Well, boar has just 160 calories per 100 grams and 28 g of protein, so it's lower in calories and fat than its tamer counterparts.

By its nature, it will be completely organic, but can be tougher than pork. Your best bet is to cook it in stews or buy it in a sausage format for your next BBQ.

Just remember to cook them thoroughly as they are, after all, wild beasts that haven't had a farmer to mommy their health. 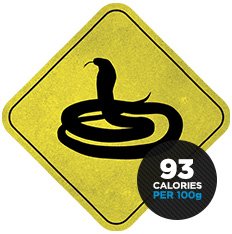 Snake meat might be the kind of meal you save for the time when you're in survival mode, putting those Bear Grylls shows into practice. However, while it's seen as a last-resort food to the West, it's common fare in the East, where its medicinal qualities are used to treat everything from cancer to impotence.

Snake has approximately 93 calories per 100 grams—half that of chicken—even though it's reported to taste the same. However, to prepare it, you have to go through the risky operation of first catching a snake, avoiding the fangs, filleting it, then battering and deep-frying it.

But just imagine the calorie-burning effects involved—they're far greater than the test it takes to pull up at the drive through down at your local KFC!

These five recipes incorporate some of the season's best vegetables and gourds with the muscle-building powers of protein. Cook clean and live lean!

Proper nutrition is the key to a fit physique. Fuel your power workouts with these easy, customizable recipes that prove you can stay on track without spending hours in the kitchen.

Some are sweet and some are savory, but all seven of these recipes are protein-packed and perfect for your healthy lifestyle! Pick one out and let's go make it!