Over 40 Amateur Of The Week: Iron Workhorse!

Joe went through hell and high water to become a brute beast at age 42. See how he used every ounce of expelled energy to build a brickyard body!

I had two older brothers growing up who worked out in the basement. My brother Mike was overweight throughout grade school and junior high and started lifting regularly. I saw him go from an out-of-shape fat kid to Hercules. He started going to a real gym and I inherited the old Weider bench in the basement.

At age 16, my father bought me a lifetime membership at a health club and it didn't take long before I benched more than most kids at high school. My family has a history of large chests and backs. At age 18, I weighed 154 pounds and benched 360 pounds at a local YMCA bench meet. I powerlifted for a bit, but never got abs or the level of leanness I wanted. I have a very slow metabolism. I look at food and put on weight. However, the ability to put on weight is a blessing in disguise. 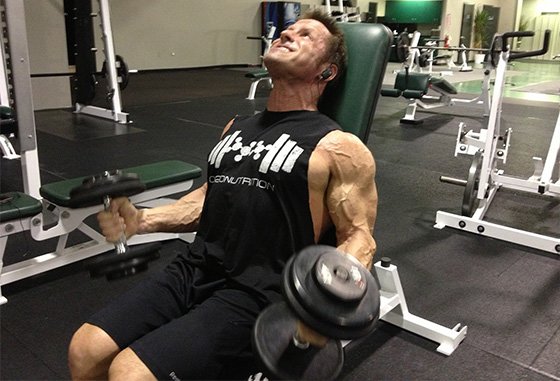 I didn't know much about nutrition in my late teens and early 20s. In 1992, an old friend who had experience living with professionals in California moved back to the Detroit area and we became training partners. He was really strict with his diet and I had never seen someone so militant about it. I asked him to put me on a diet and recall my words: "Tell me what to put in my mouth and when and I'll do it." He put me on a simple diet that consisted of 1000 calories of protein and 600 calories of carbs per day diet. It put me in the best condition of my life and I did my first show in 1992.

My friends thought I was crazy and thought I was smoking crack when my face started to get drawn. They didn't know what was going on underneath my shirt. I took fourth place. I came back to do the Michigan Novice in 1993 and won the lightweight class. I competed at the Michigan State in June 1994 and placed a disappointing fourth at 153 pounds. I decided to diet longer and did the Central States in September. I came in fuller and harder at 163 pounds and competed as a middleweight. I took third place and my hopes of qualifying for nationals were squashed.

I got depressed at that time and developed bad habits. Lots of bodybuilders were taking a substance called Nubain at that time, a synthetic form of morphine that was supposed to have anti-catabolic properties, but people got high from it. That was a gateway into harder things and I became a full-blown junkie and heroin addict from age 23 until 25. My all-time low was when I drove to South Padre Island for spring break with the crew and needed a fix so bad I drove to Mexico, only to end up in a nasty bathroom in a city off the beaten path away from the tourist area. I injected what I thought was heroin, but that turned out to be cocaine, and thought I was going to breathe my last breath. All I could hear was a loud ring and my heart beating about 300 miles per hour. By the grace of God, I'm still alive.

I lost my job running a health club and decided to move to Chicago, start over, and get away from bad company. When I was clean, I realized a huge weight was lifted and I made sure to stay in the gym. During my trials and tribulations, I was never a man of faith. I had small beliefs, but they were nothing like today. I know God kept me around for bigger and better things. The gym has always been my outlet, the place I went to keep me in line and out of trouble.

It took a long time to get my self-esteem back. I often wore long sleeve shirts so no one could see the track marks on the crooks of my arms from the needles. I had a decent physique, but was self-conscious about it and stayed covered for five years. After I cleaned up my act, I started work as a recruiter at a headhunting firm and remain there today. I'm now the general manager. I met my wife there and got married in 1999. I have a 13-year-old gymnast son who developed a back like mine and a 12-year-old daughter who's a musical wonder. I'm blessed beyond belief. 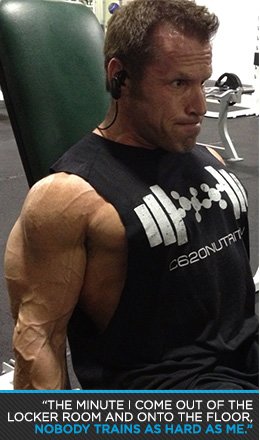 Until 2011, I lifted regularly, but without real goals. I ate whatever I wanted and blew up to 222 pounds with a 42-inch waist. In December 2011, my old training partner suggested I read about his workout, the principles behind it, and I gave it a go. I never sweated so much in my life. Three months later, I started to see a glimpse of my abs and my waist went from 40 to 36 inches. I got the itch. When the fall came around, my waistline hovered around 34 inches and I decided to compete again. I wasn't sure what my wife's reaction would be when I told her I was going to compete. The only thing she said was, "Better train those frickin' calves!" That was the affirmation I needed; the equivalent to Adrian waking up from a coma and telling Rocky Balboa "WIN."

I work downtown Chicago and commute daily by train. As a busy dad, when I get home from work at 6:30 p.m., training is difficult because of family obligations, so I have no choice but to leave on a 4:45 a.m., be on the gym floor by 6:30 a.m., and at work at 8:30 a.m. The minute I come out of the locker room and onto the floor, nobody trains as hard as me.

In March, I did the Mid Illinois Novice and was in good condition leading up to the show only to fail Bro Science 101 by trying last-minute tricks. My carb-up failed miserably. I was disappointed with my condition but thrilled about placing my fifth place out of 10. I dieted six more weeks and incorporated my version of HIIT cardio for the Illinois State show. With the show approaching, I reached out to my good friend Brian Melancon of C620 Nutrition, who was highly recommended by Layne Norton. He responded, had me send photos, and made suggestions that were golden.

Brian got me in the best condition I could ask for in the amount of time we had. He was a true blessing sent from above. I took second place and my longtime dream of qualifying for nationals became a reality. With Brian's help, I'm reverse dieting and am currently maintaining my weight about 7-8 pounds over contest weight and training my legs twice per week to bring up my hams, calves and glutes, areas that needs improvement.

Fitness has always been in my blood. It was dormant for a long time until a new workout plan was introduced.

What motivates me lately is the thought of what I went through as a young adult. The thought of unfinished business drives me to be the best I can be today. Watching the original Rocky also motivates me to keep pushing.

I get thoughts of my father standing over me saying to "get up, let's go." He passed in 1999. At age 11, I had a newspaper route that my father helped me with on weekends. Not once did I call in sick or try to back out. He instilled a work ethic in me, personally and professionally, to never to half-ass it.

I plan to spend the offseason bringing up my hams, glutes, and calves by training them twice per week. I plan to start my next contest prep with Brian Melancon of C620 16 weeks out. This time around, I'll be at most 10 pounds more than competition weight.

My biggest tip is to put your ego in your gym bag or locker. If the weight feels too heavy, it probably is. Go lighter and lift weight you can handle.

For young bodybuilders, there are no free lunches. You want to dance, pay the band. Hard work pays off, so be patient. Put in time and you will see gains. Don't let the weight control you.

Lee Labrada. I love the amount of muscle he showed at less than 6 feet tall. He has beautiful symmetry.

The encouragement I get from BodySpace members is terrific. It's a reminder to keep pushing. Layne Norton's info couldn't have come at a better time. His articles and videos showed that I don't know as much as I think. Most importantly, I wouldn't have met Brian Melancon of C620.

Thanks
- To my wife, Kim, for putting up with me during prep, my mood swings,
and my self-centeredness.
- To Bill Tocco for his support and guidance throughout the years. I couldn't have
made it here without you, brother.
- To Brian Melancon of C620. Big things are in store, my friend. Keep at it!
- To Layne Norton. The info you put out there for everyone changes lives.
- Thanks to God. He's the master architect and has me right where he wants me.