John Glaude made a name for himself by being brutally honest about the struggles and challenges that come along with big-time weight loss. Here's this YouTube personality's inside perspective on what it takes to lose 170 pounds!

John Glaude transformed the right way, the way we ask our readers to change: slow and steady. He didn't go on some reality show, sweat out half a man, relapse, and fall out of the public eye. He changed his diet and committed to regular training. And as a reward, he lost 170 pounds and achieved a truly dramatic transformation of body, mind, and life.

The process, which Glaude detailed starting last spring on his Instagram and YouTube channels "Obese to Beast," earned him thousands of fans and followers. But what finally made him famous was a single video in November 2014, which has now been watched well over 7 million times. If you haven't seen it, be prepared for one of the most inspiring and real perspectives on fitness you'll ever see.


As the video shows, Glaude is a natural speaker and entertainer. He shined when he went on "The Ellen DeGeneres Show" to talk about his video (Ellen also gave him a red Ford Mustang). But this 22-year-old barista hasn't allowed fame to go to his head. When he spoke with Bodybuilding.com, he was walking on the stair climber. But he still made time to give us a frank perspective on his journey and where it goes from here.

Q. When did you decide to get fit?

I was 20 years old, I had been out of high school for two years, and I weighed 360 pounds. The only time I ever left my house was to go to work, and then I would go back home and watch TV. That's all I did, and I hated it. I wouldn't sit there and be "fat and happy." I really hated it.

There are so many people that are there now, where I was. I honestly didn't think I could change. I didn't think there was anything I could do. There were nights where I literally cried myself to sleep because I knew that I was killing myself every single time I ate—every time—and it scared me.

Sure, I wanted to change to save my own life, but the click that happened was very simple. I was binge-watching "Miami Ink" on Netflix, and a guy came on who had lost a lot of weight. They asked him how he did it, and he preached basically what I preach today: You take it into your own hands. You learn about nutrition, and you execute what you learned. Then, you go to the gym and you work your butt off.

I realized at that moment that I was doing this to myself, and the only person who would ever get me to change was me. The only person who could stop me from changing was also me. I realized that I needed to do this for myself or I was going to die—at what, 35 years old? Maybe 450 pounds? I was scared, but I remember telling myself, "I might as well try my hardest, because I have nothing else."

You had tried and failed in the past. What was different this time?

Did you ever hire a personal trainer or did you just do it on your own?

I just did it on my own. I'm not against using a personal trainer, but I don't have very much money and they cost a good amount. I always recommend that people hire one if they do have money—it's definitely a good investment—but if you don't, it's not the end of the world.


Do you look at people—both fit people and obese people—differently after going through what you did?

When I see people who are morbidly obese like I was, I feel like... I don't want to say "bad," because that's not the word. I think, "If they only knew they could change and that it's possible to do it." Because when I was morbidly obese, I would see these transformations and I would always think that they were faked—like they got surgery or took pills. There's no way they could lose 150 pounds or more naturally.

But, I promise you, if you take your time and do the research, you can achieve this. This is possible for anyone, period. When I see people who are morbidly obese, I want to go up to them and talk to them and tell them that, but obviously I can't. It wouldn't be very well taken.

At what point did you decide to make your transformation journey public, and why?

For a while I didn't really post much about losing the weight. I felt like, at first, it was something I was doing for me. My friends would say that I was helping them with their fitness goals, and this made me realize that maybe I can help people I don't even know. At that point I decided to go public.

I was posting a lot of fitness stuff on my personal Instagram, but I know all my friends aren't into fitness, and they probably don't want to see all my stuff, so I opened a new account. Obviously I wanted to help people, but I also wanted to try to separate the two.


The funny thing is that Obese to Beast has basically taken over. I don't have a separate Instagram account anymore. I realized that I could help people I'd never met and I wanted to go for it and see what happened. I never expected what's happening to happen, but I'm happy about it.

How has your life changed since you posted the video, "My Biggest Insecurity?"

When the video went viral, that obviously wasn't the plan. I freaked out when that happened, but it was awesome that it did. I didn't realize how many people were struggling with loose skin like I was. I've had people message me who were planning on getting surgery and cancelled. They wrote that they first couldn't afford it and then realized that they don't need it.

Stuff like that tugs at my heart. It makes me so proud. Any amount of money or a car—even my Mustang—could never amount to that feeling you get when someone says, "You helped me change."

That's why I started the channel. I wanted to show people that natural weight loss and weight loss in general is possible if you just try your hardest and just keep going. There are going to be slip-ups and bumps; no road to success is straight, ever.


Now I'm in contact with people I would have never imagined I would ever be in contact with. I work at Starbucks, and people will just come up like, 'Hey, can we get a picture?' The main thing though, is that I'm able to help so many more people because my subscriber count went up and people see me more and they use me as motivation. That's more than I could have ever asked for.

Today I'm working out with some of my friends—I mean they're my friends now, but I met them through social media—and they're just the best people. They're so happy and genuinely want to learn; they're changing their lives in front of my eyes. People say I motivate them, but they don't understand how much they motivate me.

Let's do a little word association:

You're only 22 years old. What do you want to do with your life?

My plan is to do something related to fitness and helping people reach their goals. The YouTube thing is very lucrative, and there are definitely avenues I can use to help me help more people. I could go into online coaching, for one. The opportunity is still so fresh that there's no definite answer to what road I want to take.

More than anything, my motivation today comes from people who tell me that I motivate them. That, honestly, I can't explain. People tell me I motivate them, and that motivates me to keep going. I can't get that through enough.


I don't want to call people "my fans," because that's not how I see it. I feel like people who support someone else don't realize how much that support means to that person. Obviously this is just my life now, so going to the gym isn't a chore for me. It's what I look forward to every day. When I'm at work, I look forward to getting off to go to the gym. It's where I like to be at now.

I don't want to say that it's not hard to be motivated, but I just have so much encouragement behind me that it's hard not to be motivated. It would be hard for me not to go to the gym. If I didn't show up at the gym or post on Instagram for three days, I would have people asking, "Where are you? What's going on? Why haven't you posted anything on YouTube?" I have people behind me who will always be there for me.

Every January, thousands try to start transformations. What advice do you have for somebody in a bad spot who needs a little motivation? 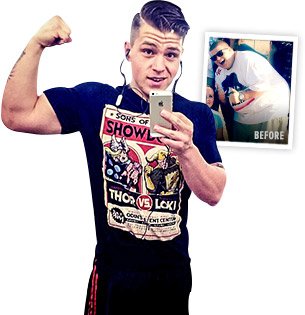 I wanted to show people that natural weight loss and weight loss in general is possible if you just try your hardest and just keep going. There are going to be slip-ups and bumps; no road to success is straight, ever.

Don't let people who might look at you funny scare you! Most of the time they're not trying to be mean; it's just that this happens every year. I've seen a lot of fit people who have a stigma toward people who are new—the "New Year's Resolutioners." People make them seem like they are not worth even taking up space in the gym.

So just get in there. Do your research, and go in there with a plan. That's the most important thing I can say to someone. Don't go in lost. Go in knowing what you're going to be doing for that day, and execute. Don't let people who say something to you or give you dirty looks throw you off your path. What they say to you doesn't matter.

It's you versus you, not you versus the person who's already fit. Stick to the plan you made. Remember why you decided to make the resolution. Remember where you started, and why you started. That will propel you forward.

That's awesome, John. For all you give, it seems like you get back even more.

Yeah, it really is awesome! It's good to see it all come together and pay it forward. I don't see how a person could get what I have and not want to help someone else achieve that as well. It's such an awesome thing that I want everyone to have it—and everyone can.

That's what I preach. It's not like I have something that is amazing and I'm better than anyone. People tell me all the time that they wish they had the motivation. You do have the motivation. It's in you; you need to find it!

A lot of people who are morbidly obese or just overweight almost feel like they're not worth the change. I was the same way. You feel like you're just going to fail anyways. That's the mindset I was in. I'm trying to show people that you are worth it.

Nobody is better than anyone. We're all the same, we're all humans. I'm not some superhuman. I'm the same as everyone else. I'm the same person I was when I was 360 pounds, too. I just found the motivation inside me to keep going every single day.