Jay Cutler didn't win four Mr. Olympia titles by splurging on the road. Here's his 5-step plan to navigate the challenges of living a clean, hard-training life when you're away from home.

Jay Cutler is one of the most popular bodybuilders of all time because he's one of—if not the—most approachable. He's not content to watch his fans from a virtual distance; he wants to meet them. And he spends upwards of 30 weeks each year on the road doing just that.

"I like the personal contact," he explains. "I get to actually shake their hands and look them in the eye. That's always much better than communicating with someone via email or text. I never thought I'd be shaking this many hands."

Bodybuilding.com caught up with Jay just after he finished a three-week tour of Spain, United Kingdom, Denmark, Holland, Germany, Austria, and Poland, promoting his line of supplements. The question we had was particularly relevant: How do you maintain a pro-caliber physique when you're on the road? The answer was this five-point plan that takes the guesswork out of travel.

Step 1 Do your homework

In Jay's prime, he often had to call hotels to ensure he could get a room with a small kitchen and have the right kinds of foods available at any hour. Sometimes those conversations took place overseas, and misunderstandings were par for the course. But today, much of this advanced planning can be done through the Internet.

"You can do so much more online than we could a decade ago," says Jay. "Book a room with a microwave at the very least, or get one with a kitchenette with a small fridge. Spend some time emailing to find out what they have for room service. Find out if there's a supermarket nearby. Who wants to pay $4 for a bottle of water when you can get a case at the corner store for that same amount? And if you want to work out, even if it's just cardio, check whether the hotel has a fitness center." 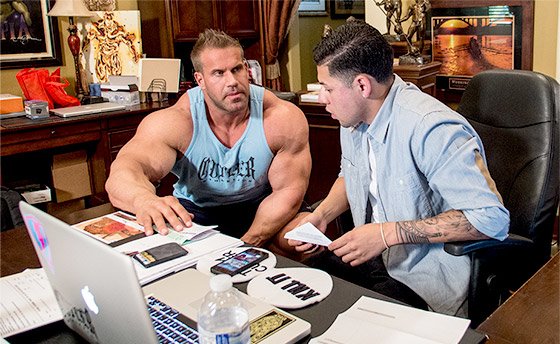 "You can do so much more online than we could a decade ago. Book a room with a microwave, kitchenette, or small fridge; learn about the hotel's room service; find nearby supermarkets; and check whether the hotel has a fitness center."

Step 2 Pack what you need

If you're traveling, you might bring along your swimsuit, T-shirts, sandals, and suntan lotion. If you're Jay Cutler, chances are you'll instead find a George Foreman grill, plastic utensils, and a maybe even a single-serving blender inside a checked bag.

What Jay puts into his bags when he's traveling may seem like overkill to you, but it's the necessary equipment that helped build a four-time Mr. Olympia physique. Depending on the length of the trip, he'll even prepare and pack many of his meals.

If you're going to go all-out and bring a grill or blender overseas, make sure you've got the right electrical adapters.

"If you prepare food ahead of time, you'll want to freeze it," he advises. "That's because airlines won't let you bring ice. When you get to your hotel, immediately put it in ice. Every hotel has an ice machine along with a microwave downstairs to heat up your food, even if your room doesn't have one."

Bars and supplements can also be a godsend when your diet is tight and options are few. "I'll drink more protein shakes and bars when I'm out of town," Jay says. "Even when everything is going right, it's harder to get the right macronutrients on the road."

Your biggest fear when flying might be that you could be stuck sitting next to a guy as big as Jay. (Yes, he does travel coach, but only on fairly short trips, he says.) But his concerns are more about the inflight meal. It's usually small, loaded with sugar and fat, and devoid of any substantive nutrition.

He says you're much better off bringing your own fare: "The food airlines serve is never good. I always bring enough food to get me through a flight—always. Yes, I'm eating cold food. No, it doesn't taste good. In the end, what's the alternative?"

If you've ever had a water bottle or other item confiscated and tossed at the gate, it may come as a surprise that you can take packaged food through security. You can! Depending on the length of your trip, a small sack of jerky, trail mix, protein bars, or sealed pouches of tuna might be sufficient. Jay's trips are often longer, and his meals are immense. (No surprise if you've watched Living Large)

"If I pack food, I'll always have Ziploc bags," he explains. "It's easier to pack many more meals than when using Tupperware. Write on each meal what it is, and eat with a plastic fork right out of the baggie. If you don't want to bring food, bring some nuts and protein shakes."

Step 4 Scope your new home and get to work

You've touched down in a new town. Now what? Find your gym and get a sweat on.

"I always tell people, especially coming off of flights, that one of the best things you can do is to go to a gym and work out," Jay says. "It really gets a lot of water out and just helps you feel better."

Nearly all hotel gyms are, of course, insufficient to meeting a bodybuilder's elite training needs. But don't let that excuse keep you from doing anything. Even a brisk walk around the hotel is better than nothing, and Jay has done plenty of them.

"Your schedule may not be what you're used to at home. You may not have the same equipment, but guess what? You don't have to have Olympia-level workouts every time you train," he insists. "Just get in there and do something." Use supersets or other intensity boosters; do what you can, and make the most of what you've got.

There's not much that's more terrifying for a clean-eating traveler than going to a strange restaurant. Mysterious sauces and chefs who prep for taste rather than health can send calorie counts into the stratosphere. You may not want to be that guy—the one who makes special off-menu requests—but don't be afraid. Jay says that in his experience, most restaurants and hotels want your business enough that they will do their best to accommodate your particular dietary needs.

"I've walked into the back of kitchens to explain how to cook food," he recalls. "Any place that makes chicken sandwiches has chicken breasts, which is fine as long as it's not fried or cooked in a ton of butter." Language a barrier? "There's always someone who speaks English no matter where you are," he says. "And nowadays you have Google Translate to help make sense of it, too."

Be prepared, be confident, and you'll get what you need. And once you do, order plenty of it. "I'll bring some extra baggies," Jay says. "If I order extra food from a restaurant, I don't want to have to carry around a big Styrofoam container."

Is this extra work? Definitely. But ultimately, Jay says, you'll do the advance preparation if you're truly hungry. Hungry, that is, to be your best.

Jay Cutler: How I Survived My Toughest-Ever Workout

When you're on top, everyone is gunning for you. How did Jay Cutler dominate competitive bodybuilding for five years? He trained harder than his rivals and won four Mr. Olympia titles.

Every phase of training comes with its own unique challenges and temptations, and none of us are immune to error. The sooner you recognize these classic training blunders, the sooner you can correct them and get back to growing!