Years before I started training, I would watch movies and see people like Steve Reeves and wonder how they got that way and got into movies. Here's a blast from the past for you to see where many got their start.

Years before I started training, I would watch movies and see people like Steve Reeves (Hercules) and wonder how they got that way and how'd they found their way into movies.

It was said that if you trained and moved to Europe you could find your way into Italian films, as they always liked bodybuilders. Many good bodybuilders did films in Europe in those days, such as Steve, Reg Park, Gordon Scott and even David Prowse who played Darth Vader.

In 1964 'Muscle Beach Party" came out and brought a lot of attention to the bodybuilding scene in California featuring Peter Lupus who later on became a regular on Mission Impossible. Other bodybuilders in that film were Larry Scott, Steve Merjanian, Chet Yorton, Dan Haggerty, Gene Chuey and a few muscle girls as well. 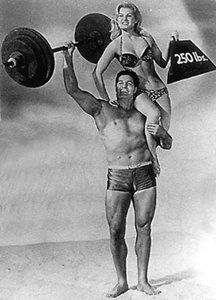 There weren't many bodybuilders on TV in those days as they were looked upon as freaks and really didn't fit any roles unless they were specific to bodybuilding or mythical names.

But, there was a short-lived series called The Gladiator and the host of the show was none other than Dave Draper. He was an awesome sight on TV and captured the bodybuilding audience in those days. There was no one else like him and it brought a lot of fame to Dave for future roles.

In 1967 Dave had made a movie called "Don't Make Waves" with Tony Curtis. There was an array of bodybuilders in that film such as Chet Yorton and Reg Lewis to name a few and also a few extras.

This film really began to put bodybuilding on the map and gave the sport some notice. I must've watched this movie a dozen times, which really inspired my training. I had to have traps, delts and arms like Dave. 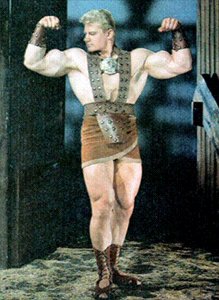 Click Image To Enlarge.
Dave Draper As The Gladiator.

I never would have guessed that years later we'd be training together, along with the other guys I had mentioned.

I had heard before that time that there was a group of guys training on the beach in Santa Monica and living in an apartment building called 'Muscle House', owned by a woman who also cooked their meals for them.

One of the bodybuilders was an actor, and not having much success at it. He was from New York and had an audition one afternoon in Hollywood. He had told all the guys that if he didn't get this job he was back on a plane home.

Well, his attitude was sort of cocky and he carried it through that way in the audition. Much to his surprise they liked him and he landed a series that went many years after that. This man was Vince Edward who played 'Ben Casey'. 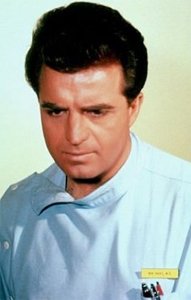 So you never know where things may lead. Clint Eastwood always trained and even though he wasn't what we call a competitor, he lived the lifestyle. In Europe they loved him and his Spaghetti Westerns that made him famous.

Robert Duranton who was a French bodybuilder and went into Pro Wrestling landed a film with Shirley Maclaine but in the film they never showed his body. He wore a suit and tie and had a pretty decent role with her.

William Smith was a huge bodybuilder and was first seen on TV as a cowboy in the series "Laredo". He went on to do over 100 films and TV shows and was Falcon Eddie on 'Rich Man Poor Man." Bill was also the fighter with Clint Eastwood on 'Every Which Way But Loose." 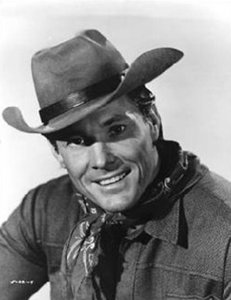 As time moved on and I made my move to Santa Monica, like everyone else I wanted to try my hand at acting. I figured that the pro wrestling circuit was helpful and taught me how to act and work like the theater so this would be easy for me.

I looked around for agents like everyone else and found one who decided to take me on. He did warn me that I might be too big for a lot of roles. Doctors, Lawyers, average people were small and in a role with a huge body, it wouldn't make sense on a show trying to explain the muscles.

I was in disagreement with that as I felt that a lot of people worked out and would understand. However, casting directors didn't, and they didn't have a clue how to cast anyone like us other than a dumb muscle head. This is what we were considered back then which was no different than a dumb blonde.

Mae West was the first to use bodybuilders in her act when she traveled around doing shows in Vegas. She used 5 or 6 bodybuilders and Joe Gold was one of them. He also, at that time, tried his hand at pro wrestling, which very few people know about. Zabo (Mr. Abs) Kozewski was another one that Mae liked along with Reg Lewis. 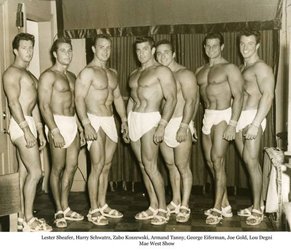 Click Image To Enlarge.
At One Of Mae West's Shows In Vegas.

Years later in the mid 80's Mae West did her last film called Sextette and many of us worked two months in the making of it. It was a terrible film but it was fun and almost every superstar at the time was in it.

Bodybuilders were commonly used in background scenes as bodyguards or security. That's pretty much all that was expected of us at the time. I was submitted by my agent to play just that on the FBI series with Efrem Zimbalist Jr. 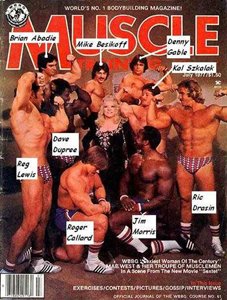 This was a very popular show and this job got me into SAG (Screen Actors Guild) which was really hard to get in to. If you wanted a union job and most TV and films were union, you had to belong to SAG. This guaranteed you certain daily rates and with a certain amount of income for the year. You also got health coverage.

Shortly after the FBI, I read for a film called 'Ben' which was the sequel to the rat movie 'Willard'. They had me read for a gay gym instructor and most bodybuilders didn't want to play that character.

I didn't mind, it was a role and we're supposed to be able to stretch our talent. I read it and got the part, and lucky that I did as it paid residuals for many years to come, and to this day. I'm on the jacket cover in the video stores. 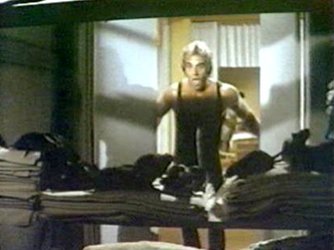 Click Image To Enlarge.
A Shot From Ric's Film, "Ben".

I hadn't done any TV commercials at that time but Arnold and I were walking on the beach and got stopped by some people from a production company. They asked if we'd be interested in auditioning for a Chevy commercial that next Monday.

Of course we would and that day we drove over to the audition and brought a few friends. We were all hired and the job was to lift a Chevy into the air, which we couldn't do, and along came a wimp and lifted it with one finger (they used a crane). This was a SAG job and paid very well. 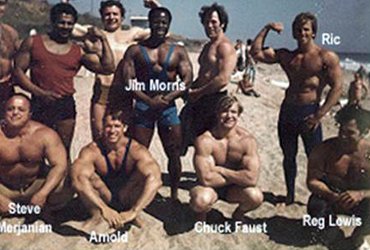 Click Image To Enlarge.
Ric And Arnold's First Commercial In 1971.

Here were some of the people from the earlier movies I had mentioned such as Steve Merjanian, Reg Lewis and Don Chuey. Finally I'm working with all these guys. This was the first TV commercial that Arnold and I ever did. Things just took off from there for both of us.

Moving On To Bigger & Better Roles

Arnold went on to do Conan and other films. I continued to do over 50 TV commercials and several movies as well. During that time there was a pay phone on the wall in Gold's Gym Venice and many studios would call looking for Bodybuilders for a show.

We'd all run down and audition for the roles and some of us would get it and a few wouldn't, but back then there were a lot of variety shows on TV and they'd use us to fill in where we were needed to look big.

The Incredible Hulk came out and put Lou Ferrigno on the map as a superstar and inspired many kids to start working out and build their muscles. I was lucky enough to play the 'middle hulk' on the show, which has brought me a lot of fans today.

The Terminator showed Arnold off to the maximum and also created a huge interest in bodybuilding. The public was finally beginning to see that there was a place in this world for good bodies and not just freaks.

Today's actors all work out and many of them have great bodies. They take pride in themselves and always go for the six pack. Look at Harrison Ford who showed his abs recently in a magazine. This was pretty impressive.

I'd say that bodybuilding has definitely come a long way in films and will continue to grow. I'm submitted for so many things through my agent just because I've stayed in shape and it calls for muscle.

But it's not just the dumb muscle-head stuff any longer. Today on TV the men with the good bodies have major acting roles and stunts as well to show off their athletic capabilities. 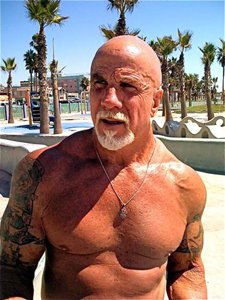 Click Image To Enlarge.
I'm Submitted For So Many Things Through My Agent Just
Because I've Stayed In Shape And It Calls For Muscle.

I have my own show in development as I write this and still train six days a week. At 65 I have to show my peers that we can still hang in there, be in shape and get film work. Now I can play a grandpa with abs.