Get A Body Like The Fighter's Mark Wahlberg With This Quick Program!

With Mark Wahlberg's latest film 'The Fighter' in theaters, why not take a peak at what it takes to train like a boxer. This workout is about getting the body moving, changing direction rapidly and staying on your toes.

Some of you may remember Mark Wahlberg from his hip-hop days as the lead vocalist for Marky Mark and the Funky Bunch. Even fewer of you may remember him as one of the original band members, along with his big brother Donnie, of New Kids on the Block. But almost all of us remember him from his Calvin Klein modeling days. His shredded abs and powerful physique were stopping traffic long before those infamous Wonder Bra billboards.

Wahlberg moved to Hollywood and carved out a very impressive career as an actor. He appeared in movies such as Boogie Nights, The Basketball Diaries with Leonardo DiCaprio, Renaissance Man with Danny DeVito and my personal favorite, Invincible. He has even been nominated for an Oscar for his role in The Departed where he played opposite Hollywood legend, Jack Nicholson.

As he made this huge change in his career, dropping his one-time bad boy image and becoming a serious actor, one thing remained constant for Wahlberg; working out. Pumping iron and staying in shape have kept this former jailbird on the straight and narrow and has enabled him to forge a career on the silver screen. Starting the day by maintaining the physique that earned him his celebrity and the platform from which he launched his super successful career, has always been the priority for Mark Wahlberg. "Strong body equals strong mind" is a philosophy by which I am sure he lives.

This month will give cinematic release to Wahlberg's latest movie, The Fighter. In it, Wahlberg plays boxer "Irish" Mickey Ward opposite The Dark Knight star, Christian Bale, who plays Dickie Eckland, Ward's troubled half-brother. Ward, a former professional boxer from Massachusetts, which coincidentally is Wahlberg's home state, had some of the greatest fights in boxing history. Ward's fights earned Ring Magazine's Fight of the Year Award three years in a row: 2001, 2002, and 2003.

The movie documents the trials and tribulations of Ward's life both inside and outside of the ring. It has been a project close to Wahlberg's heart for many years and is now making its cinematic debut. Wahlberg took his role as Mickey Ward so seriously that he began training for his part more than two years before filming began.

Now that's some serious preparation, and here's me thinking that sixteen weeks pre-contest prep was tough.

So now that we have all that out of the way, let's get down to the real reason you are reading this article and that is how Mark Wahlberg built that lean mean machine he calls a physique. Wahlberg is a real blue collar kind of guy, he wants to train hard and go home. So the workout that you are about to see is not for the faint of heart, and it contains NO form of traditional cardio. The whole workout is going to be a seven day split. The whole program is pretty basic, following the "Keep it simple, stupid" principle. 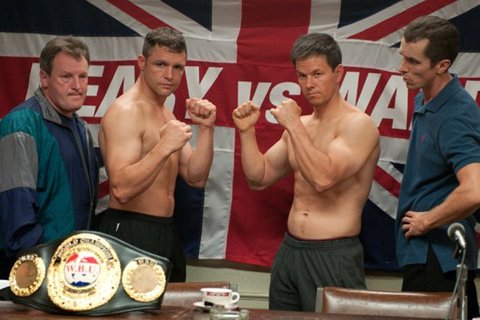 Click To Enlarge.
Wahlberg Is A Real Blue Collar Kind Of Guy,
He Wants To Train Hard And Go Home.
© 2010 - Paramount Pictures

If you are taking up boxing for the first time, my advice is to seek the help of a professional, this will help avoid any unnecessary injuries due to lack of skill.

The most effect way to maximize your boxing style workout is to create a circuit:

This workout is about getting the body moving, changing direction rapidly and staying on your toes. Focus on the accuracy of your punches, the speed and power will come. Each station should be no shorter than 60 seconds and at the end of each 4 minute round, take a two minutes rest. Go a total of ten rounds. To maximize this workout add a weighted vest into the mix. I would have a man of Wahlberg's level of fitness in a 30lb vest! 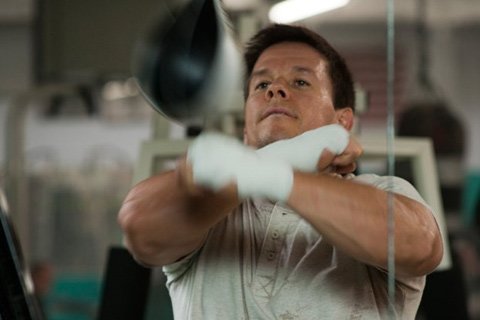 Click To Enlarge.
This Workout Is About Getting The Body Moving, Changing
Direction Rapidly And Staying On Your Toes.
© 2010 - Paramount Pictures

Warm up on the bike or cross trainer for 5 to 10 minutes then perform dynamic stretching for the whole body. Do torso twists to prepare the core and leg swings, front and back, to maximize the stretch for the quads, hamstrings and glutes.

The objective of this workout is to keep moving, hitting all energy systems. Perform one superset on each muscle group and then move onto the next. That is a total of 10 exercises, or 5 supersets per circuit. This principle is also going to be followed on day two of the workout, chest, shoulders and triceps.

Warm up on bike or preferably a cross trainer for 5 to 10 minutes. Perform rotator cuff exercises both internal and external. Warming the rotator cuffs is crucial for injury prevention. It is better to be proactive than reactive.

The basketball sessions are pretty simple, play a game of basketball. This is interval training at its best, burning massive amounts of fat calories. This will keep all those lovers of "functional" training happy as speed, agility, and flexibility will be tested to the limit.

Because this workout is so intense it is vital that you have a sound nutritional plan to keep your body fueled. You need to eat every two to three hours and ALWAYS have a good source of protein in each meal; this should be varied throughout the day with choices such as chicken, eggs, red meat and fish. Backing up your nutritional plan with a sound supplement stack is also vital to the success of any workout regime. My recommendations for supplements would be:

As you can see, this workout is not for the faint hearted. It's a no B.S. and get out of my way if you are going too slow type affair. But with a sound support system in place you can achieve tremendous results making you the envy of all your fellow gym buddies. You may never grab your crotch like Marky Mark and the Funky Bunch, or you may never star in a movie and earn yourself an Oscar nomination, but you sure as hell can have a physique that is worthy of the silver screen. Give this work out a try and bring out "The Fighter" in you!!