Core Conditioning: Training Your Abs And Trunk For Sports!

Look around any gym in America and you'll see one common theme in them: in our ab crazy times it is the way the torso is trained. Hundreds upon hundreds of crunches at the end of the workout. Learn a better way!

All Articles Are Republished With Permission From Intensitymagazine.com!

Look around any gym in America and you'll see one common theme in them: in our ab crazy times it is the way the torso is trained. Hundreds upon hundreds of crunches at the end of the workout. 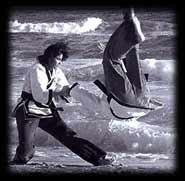 Uninspired, boring, and not a effective way to train. The worse part is that this is the same scene played out by many sport teams and recreational athletes. Martial artists are not exempt from this mistake. The torso and rotational strength requirements for martial arts are extremely high. It is not a requirement being met by the traditional ab training programs.

Grapplers require large amounts of torso strength to aid them in throwing, defending the guard, and getting up from the floor. Strikers are constantly using their torso and rotational strength in kicking and punching. Strengthening these areas will greatly improve performance.

Grapplers who exercise these areas properly will be amazed at how much easier it is for them to get out of difficult positions, to throw opponents, and to defend their guard. Strikers will see much improved power on both kicks and punches. In addition, the biggest benefit will be injury prevention resulting in less downtime and more skill acquisition. 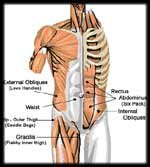 The torso is made up of the rectus abdominis, external obliques, internal obliques, transverse abdominus, quadratus lumborum and the spinal erectors. There are four basic ways the torso musculature can work. They flex and extend the spine, laterally flex the spine, rotate the trunk and act as stabilizers. A strong torso has nothing to do with a 6-pack; that is a result of low body fat. The torso's real role is to transfer force, produce power, link lower body to upper and stabilize. It is the center of all body movement. The stronger the center the more efficient the movement.

Martial arts require random, unpredictable, large movements of the trunk. Great demands are exerted on the trunk musculature. Most recognize that strengthening the torso is very important for performance enhancement. Sadly however, due to the influence of mainstream fitness magazines, equipment manufacturers and corporate gyms many are going about it in a misguided way.

The search for the Holy Grail (the 6-pack) has induced many trainees to include hundreds of crunches, done on the floor or machines, in their daily routines.

This type of training is not optimal for the martial artist or any athlete; it does not lead to better performance or reduce the risk of injury. The goal of any training program should be to improve performance by transferring strength and power gains into improved athletic performance.

In addition, the usual type of trunk training is done in the sagittal plane only. However, sport happens in three planes. Rotational training is one of the most neglected areas in many programs. Most traditional ab training is often done while lying down. Training for sport needs to take place in both prone and standing positions, with the emphasis on standing.

How then do we train the torso beyond using the typical crunch program? By far the most overlooked way to train the torso is through basic exercises like Olympic lifts and their variations, squats and deadlifts. These lifts involve the trunk muscles much more than sit-ups ever could. Eastern European coaches would laugh at the emphasis placed on crunches in this country. They believe you can get all the trunk strength you ever need through the above mentioned lifts. Because these lifts strongly recruit the abdominal musculature for stabilization, the abs become strong and conditioned.

Beyond olympic lifts and squats there are several other ways to strengthen the abs while performing other exercises. For this we need to look at the strongmen of yesteryear. The dumbbell bent and side presses were staples in their training. They are an excellent way to train the obliques.

They may seem like shoulder exercises to many, but your obliques will let you know you worked them the next day. Kettlebell swings, snatches and cleans work the torso through a large dynamic range of motion. Done properly they take you through a large amount of flexion and extension ballistically, perfect for sport. Because these lifts are usually done 1-handed there is also some rotational element to them; movement is taking place in more than one plane.

The Turkish Get-up and the Saxon Press are another pair of exercises borrowed from the past. The Turkish Get-up is the most universally despised lift among our athletes. They all complain and whine about it but they all want to do it since its effectiveness is so apparent. Lie on your back holding a dumbbell, kettlebell, barbell or sandbag; the intent is to stand up without unlocking your elbow and keeping the dumbbell in the air above you.

The Saxon Press is another fantastic exercise for all-around torso strength. Holding two light dumbbells above your head lean to one side crunching your oblique then lean to the other side. Try to get all the movement from your obliques not your legs.

Medicine ball training, while often used to great effect by elite athletes, is often overlooked and underutilized by the general public and recreational athlete. The medicine ball is an excellent tool for total body power and explosive power in the torso. Athletes and coaches alike enjoy the med ball.

The workouts can be done quickly, accommodate a large group of athletes, are easy to learn so teaching time is minimal, and it is a fun workout The exercises are limitless and can include flexion, rotation and flexion with rotation. Simple to do, with balls light enough for anyone, med ball training can be viewed as olympic lifting for the torso. Med ball workouts can be done intensely as a stand-alone workout or used as active recovery at lower intensities.

Med ball throws can be done against a wall or with a partner. Overhead passes, chest passes, and side passes can be put together in a circuit that will not only increase your trunk power but will also help with overall conditioning. Med ball chops and twists can be done alone and in a variety of patterns. The great thing about chops and twists is they fulfill all our requirements. They are done standing, in multiplanes, using flexion and rotation and can be done ballistically.

Is doing a large amount of crunches bad? No, it's just not the most effective way to train the torso. Crunches should be a part of any well-rounded training program. However, we need to take a look backward at the pioneers of strength training. Men like Sandow, Saxon and Hackenschmidt. By using many lifts that are forgotten or ignored today, they built tremendous torso power. Power that would be the envy of any martial artist. They weren't worried about six packs, but about real world effectiveness. Go train.

Intensity Magazine is letting us republish their finest articles to help make us the most comprehensive website in the world!