Joseph lifted for looks until years of poor posture left him with chronic pain. After rethinking his approach and integrating some wisdom from physical therapy, he lost the pain—and half of his body fat! 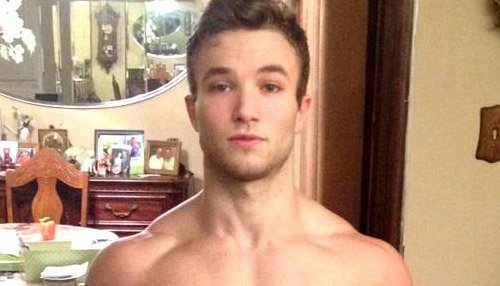 Like many teens, Joseph Rivieccio was first introduced to the weight room through sports. Training for lacrosse meant that what he did in the gym had to translate to the field. But while he knew that core stability and lower-body strength were essential, the call of mirror muscles was what he heard loudest of all.

"When you go to the gym at 18, you're not really sure what you're doing," he candidly admits. "You have some idea, like, 'OK, I want to get bigger. I don't want to get knocked around in a sport or look small.' You just follow someone in the gym who looks big—that's the person who looks like they know everything."

Sure, Joseph gained plenty of muscle mass, but that didn't tell the whole story. He was in pain—far more than a strong, athletic 21-year-old should be. His upper back and neck were screaming, and his training only seemed to make it worse.

Rather than throwing open the Pandora's box of doctors, body workers, and chiropractors, Joseph took the reins and became a devoted student of human anatomy. He began volunteering at a physical-therapy office, trained to become a strength coach, and began taking performance nutrition seriously. Slowly but surely, he built his ideal—and pain-free—physique, all while getting stronger and more ripped than ever.

Don't believe the online chatter that acts like it's bros versus functional-fitness. Take it from Joseph: You can have your split and be a balanced lifter, too! Here's how.

How would you describe your training when you first started?

When someone looks big in the gym, you assume they know everything. As I learned the hard way, that's not always the case. I joined the bigger dudes in the gym, and trained centered on just that—getting big. 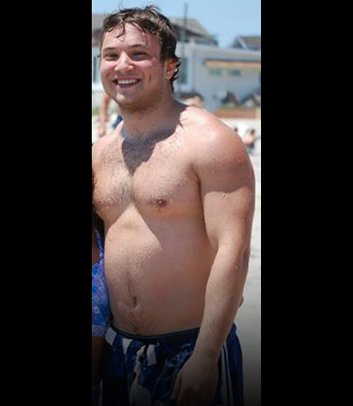 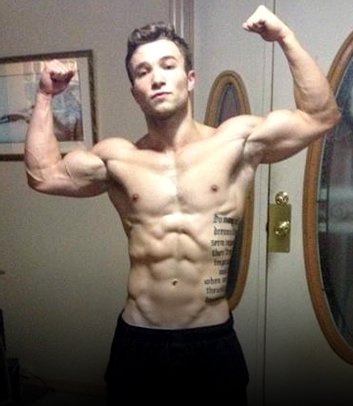 There was a lot of emphasis on heavy weight, but no consistency when it came to form or range of motion. Everything was just weight and mirror muscles—lots of chest and biceps training—but no back or posterior chain work to keep things balanced.

Is that how you think you developed back pain?

Yes. I trained with them from 18-21, and looking back, my training was very unbalanced. My posture wasn't great, and years of training left me super front-heavy with nothing in the back. Even when we'd do core work, it was usually a ton of sit-ups instead of movements like planks that call for stability. I thought I was doing the right thing, but my posture was just poor, and I was developing a lot of upper- to mid-back and upper-trap pain.

I felt pretty imbalanced. When I was about 20, I started picking up hours volunteering at a physical therapy office, where I later came on as a worker. I asked my colleagues questions, and it all seemed to lead back to needing to be balanced.

What was your "aha" moment?

I was in pain, but a photo of me at the beach brought it all to light. Sure, I was muscular, but my shoulders were slumped, everything was imbalanced, and my posture seemed to be getting worse and worse. I just felt like it was hard to hold up my head during the day. And my back was hurting. 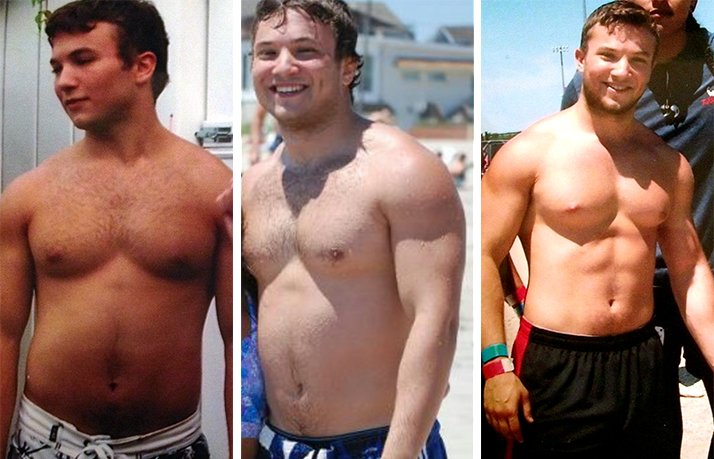 My shoulders were slumped, everything was imbalanced, and my posture seemed to be getting worse and worse. I just felt like it was hard to hold up my head during the day.

Looking at that picture, I didn't think I looked super healthy, even though I was going to the gym all the time. It was all culminating, and it was clear that what I was doing wasn't working. I knew I really needed to focus more on my training and nutrition.

Nutrition plays a huge role. What was your nutrition like initially?

When I was 18, I didn't pay much attention to nutrition at all. Sure, I was putting on size with training, but I didn't really look good. Things only changed when I started reading articles on Bodybuilding.com and in magazines like "Muscle & Fitness." Once I realized the importance of nutrition, I started changing my diet.

I put more of an emphasis on chicken, fish, vegetables, and grains, but I'd still eat 6-7 eggs, 1-1/2 cups of oatmeal, and a few slabs of bacon for breakfast. It was like a nonintentional bulk from a lack of knowledge and understanding. At that point, I wasn't worried about portion size. I figured if I was eating the right things, everything would just come to me naturally. Unfortunately, that's not quite true.

How did you get the ball rolling and start to change your habits?

Seeing all the different total-body programs that were out there for free definitely helped. I read up on all the diverse methods for developing muscle—from hypertrophy to strength training to power development—and all of the anatomy that came along with it began clicking for me.

As I got more interested, I started pursuing health as a career. I changed my major from business to exercise physiology and pursued my CSCS. I also started focusing on my weaknesses. My lower traps, my rhomboids, and a lot of my back musculature—including my hamstrings—were really out of balance with my front. To strengthen my lower traps, I did scapular pull-ups and active handstand holds where I pushed into my palms. 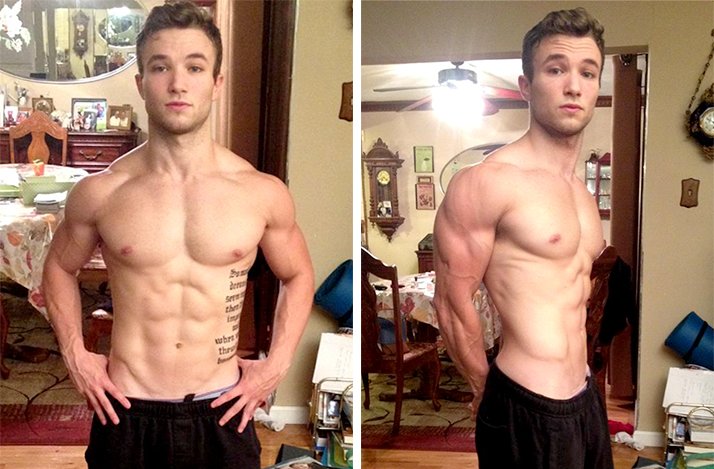 I read up on all the diverse methods for developing muscle—from hypertrophy to strength training to power development—and all of the anatomy that came along with it began clicking for me.

I also did exercises I picked up in therapy like rhythmic stabilization, where I'd hold a medicine ball out in front of me and have someone trying to push it from all angles while I kept my shoulders back and stable.

Movements like this are things I would have overlooked before, because they're not about the numbers. But now I realize how important they are. A simple exercise like rhythmic stabilization turns on your rotator cuff and all of those little muscles that are usually overlooked.

Now that I've gotten into therapy as more of a career, I see how many people have dysfunctional movement and imbalanced. These days, my training is as much about strength as it is about training for function and overall health. I can follow a split, but still maintain my muscular balance.

Tell us about your workout

I enjoy working each body part twice a week. Jim Stoppani's Shortcut to Shred periodizes both the rep scheme and isolation/compound lifts weekly, which always keeps the program fresh. I primarily used his program to lean down.

What helped you stay motivated?

I started taking progress pics as I went along, and I think that was the most helpful thing I could have done. Being surrounded by like-minded people helped, too. While I was on my journey, I also met my current girlfriend, who was also interested in fitness. She'd come to the gym with me, and cook healthy, balanced meals that helped keep me on track.

I also made sure to have different ways of measuring progress. I tried to have a couple of goals so that how well I did wasn't all based on one thing—whether that be weight loss, body fat, or lifting. Sure, you might be focused on a weight goal, but looking at body fat and performance gives a better holistic view. That way, if one goal was stagnant for a while, but the others were moving, I still felt like I was going in the right direction.

What did you learn on your journey that was a real game changer?

After moving pass the "bro training," I really started basing most of my training on the foundational compound lifts: the squat, the deadlift, and the bench press. I think a lot of people know about those movements but have taken them out of their programming or are just quick to change their workouts around. But I've been basing everything off of those three lifts for a really, really long time, and I've seen a lot of progress doing that. 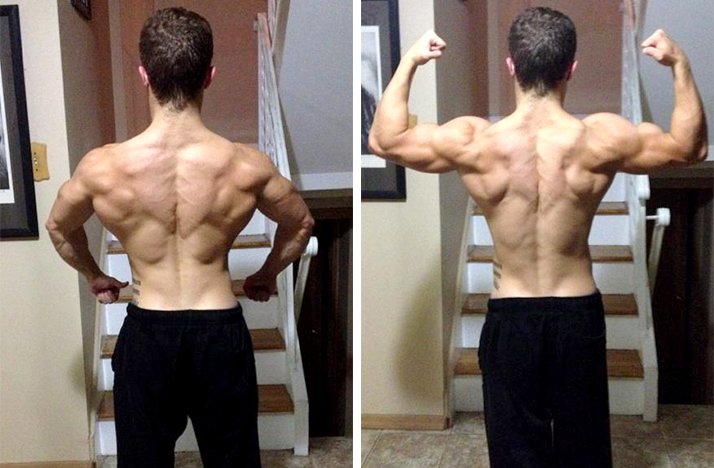 My advice is that people should stick with their programming and make sure they see it through.

My advice is that people should stick with their programming and make sure they see it through. The biggest thing now is that people want instant gratification. If they don't see change right away or their weight loss slows, everything drops off.

It's important to take your time and reflect on how you actually feel. Keep the big picture in mind. If you're trying to lift 300 pounds, but you're getting there with crappy form and developing muscular imbalances, it's not worth it.

Before you got into fitness, you used to be an animator. How would you draw yourself now compared to when you started on your journey?

I would have drawn a slumped over, depressed character before. Now I would draw someone standing tall and proud of all he's accomplished.