From Fan To Famous – My Bodybuilding Journey.

When I was around 12 and saw my first issue of Muscle Builder Magazine. I read articles to see how guys built muscle... Former professional wrestler Ric Drasin describes what led to his incredible success.

From Fan To Famous - My Bodybuilding Journey

I get tons of emails from kids who tell me that their dream is to become a professional wrestler and to build muscle. Many of the older guys who call tell me that this has been their dream since they were kids. We all have dream and hopefully goals, but many of us never pursue or engage in them to any extent.

Find this video on the Video Network where you can leave comments, rate the video and download your own copy!

When I was around 12, I bought one of Weider's first bodybuilding magazines called Muscle Power. I remember twins from Canada called the Brunet brothers and these guys were chiseled muscle. I read articles to see how they did this and of course most were ads for equipment and just a hint of supplements that really weren't developed yet.

The ad read, 'pack 30 lbs of muscle on in 30 days". Right? I asked myself if this was possible and if so, how can that be? I envisioned going to the market and buying pounds of ground beef and slapping them on my body - at least that's how I interpreted the article.

I had a small weight set and began doing curls. I had no knowledge of a workout routine or what it even meant. I just knew that curls built biceps. The next day I was sore and could hardly bend my arms. I proceeded to do this a few times a week and eventually through in some standing military presses. I found a bar be queue bench out back and used that for bench presses and now I had a few exercises I could do.

Diet was unheard of and all I knew was that there was a protein powder in the magazine but I couldn't afford it at that time. I did order a YORK Barbell Company sweatshirt which I still have to this day. It's a collector's item.

I began to see a few little lumpy muscles but after about a month, I didn't look like any of those guys in the magazines. It just wasn't working for me.

I took off a few months and lost interest but would go back and forth a few times and start up again. I'd even have my Mom sit on my feet so I could do sit ups and not slide across the carpet.

At about 16 I decided to take up the weights again. I was a lead guitar player in a rock band and was pretty lean. I had a girlfriend who was a senior in high school and was an all around athlete and homecoming queen. She was the prettiest girl in school and she liked me. She lived with her cousins that were two high school football players and had weights at their house. They invited me over to work out with them.

This time, I did it right and incorporated more body parts and exercises. Within a few months I really began to see progress, in fact to the point where she told me that I was getting too lumpy. I said to her that this is the idea about training and it's what I want.

Time moved on and she graduated and went away to college. I joined the YMCA which had a pretty miserable looking weight room but it would do for now. I still continued to train into my Sr. year of high school and play in the rock band at dances. We were the number one band in town and got a contract with Capital Records. So, this inspired me to train harder. If I'm going to be out in public, then I have to look great. 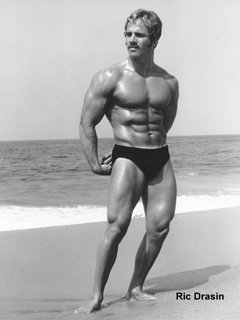 Click To Enlarge.
If I'm Going To Be Out In Public, Then I Have To Look Great.

The down side was that all my friends made fun of me and told me that one day this would all turn to fat. Of course we know that muscle cannot turn to fat but those people who are not educated on this believe different. I didn't let it bother me and would get to the gym whenever I could, even if it meant going at 10 pm.

Soon I was developing a good body and now was reading the magazines that had all the guys from Venice in there. Dave Draper, Larry Scott, and Don Howarth just to name a few. I took a drive from my hometown, Bakersfield down to Santa Monica and went to the beach where I actually saw Larry Scott in person. It was unreal the body this guy had. I said to myself that I will achieve this and it won't be long.

After returning to Bakersfield, I went back to the gym and hit it even harder. Some local powerlifting contests came up and I entered. I actually won my weight division. I felt that powerlifting was a good base for bodybuilding so I always incorporated bench presses, squat and deadlift.

I found a better gym in town, called 'Babe's Gym' which at the time was first class. I decided that this is where I'm going now and they were only open 3 days a week for men and 3 for women. This was tough so I hit the YMCA on the off days. Babe's gym was the first place that I benched 400 lbs and got my name on the board.

I read that a Mr. Central California contest was coming up in Fresno so I signed up and entered it. To my surprise, I won and it really inspired me to go more.

My father had passed away about the same time I was doing this so he never got to see my pursue my dream but my Mom was always there for me. She used to call the gym owner and asked if I was coming home for dinner. He's always laugh about that because he knew my training came before anything else.

Not much longer after that contest, I took an interest in Pro Wrestling and this was because my Dad used to take me to the local matches. I never thought I'd be doing something like that but I felt that since I was developing my body, that it'd be nice to make money with it instead of a trophy. 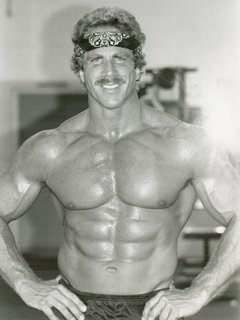 Click To Enlarge.
Babe's Gym Was The First Place That I Benched
400 Lbs And Got My Name On The Board.

Wrestlers would come to town on Thursdays and hit the gym before the matches. I asked them about getting into the business and they concluded that I'd do well with the body that I developed. They suggested that Johnny Mae Young who was the women's heavyweight champ was training a few people in Los Angeles at the Olympic Auditorium and that I should go see her.

I took a drive down to meet her and we talked as she asked me to take my shirt off. When she looked at me she said, "Wow, I can make some money with you" and decided to start training me in a ring upstairs. I drove back and forth 5 days a week and hit the gym every day when I came home. I was truly dedicated even though I was wiped out.

Not long after that I moved to Los Angeles and began training at Bill Pearl's gym in Inglewood. Bill Pearl was Mr. America and one of the best. He had a hard-core gym and hard-core lifters. I seemed to fit right in and made friends right away. This is where I really progressed in building muscle and learned a LOT about diet, which is 80% of it. I trained there for a good year and then made the move to Gold's in Venice where I met all the superstars, including Joe Weider who put me in the magazines. 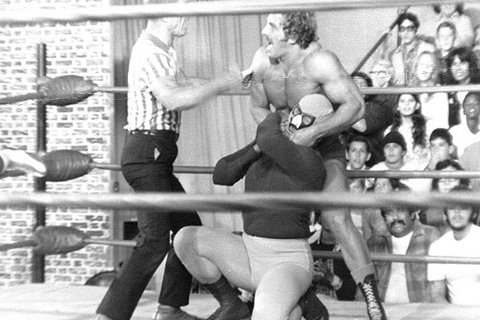 Click To Enlarge.
This Is Where I Really Progressed In Building Muscle
And Learned A Lot About Diet.

Training at Gold's then was the icing on the cake as I was able to fine-tune my body. I entered Mr. Venice Beach contest and won. But contests were not my thing. I got back into wrestling locally and was on TV twice a week and starting to book TV and Film work with the body that I developed.

Now, I've become one of the famous bodybuilders that I used to read about while living in a small town and I was in all the magazines with them. This was a dream come true and now it's the history in my past. Those years came and went and it's a tear in my eye when I think back of how great it was. It will never be again, but I did live it and now I continue to train the same way as I did then and stay in shape. I've never regretted one minute of it and would do it the same way all over again.

Bodybuilding, The Early Years: 'The Equalizer' Reveals Rise To Success!
It all started when I was about 12 and saw my first issue of Muscle Builder Magazine. I kept reading these articles... Former professional wrestler Ric Drasin shares accounts of what led to his incredible success. Learn more.

How Bodybuilding & Fitness Popularity Increased Through Movies!
Years before I started training, I would watch movies and see people like Steve Reeves and wonder how they got that way and got into movies. Here's a blast from the past for you to see where many got their start.