Get to know Bodybuilding.com athlete Melody Decena Wyatt and learn her secrets to training, nutrition, and supplementation!

Melody Wyatt has quite the resume. She's a Bodybuilding.com and Optimum Nutrition athlete, an Army National Guardsman, a certified personal trainer, a proud mother, and a figure and bikini competitor. In short, she's a bona fide badass with an enviable work ethic.

Melody was once led astray by negative self-talk, but learned to battle on through to find strength in the gym, in her body, and within herself. She later took this resolve and work ethic to her first bodybuilding competition at the 2013 NPC Sun City Regional and ended up taking first place.

She didn't stop there; she further quenched her thirst for challenge in the 2014 BodySpace Spokesmodel contest and in the 2014 NPC Dennis James Classic, where she took second and third place, respectively.

Today, Melody is a proud athlete on a mission to inspire other moms and folks who struggle to fight against the tide of naysayers.

If you're plagued by the "never" mindset, find courage and inspiration in Melody's story, and get started on your own fitness journey!

Learn what got Melody into the best shape of her life!

Melody knows that if she's not on top of her nutrition game, her results won't be ideal.

Melody believes in proper supplementation to help the body look, feel, and perform at its best. 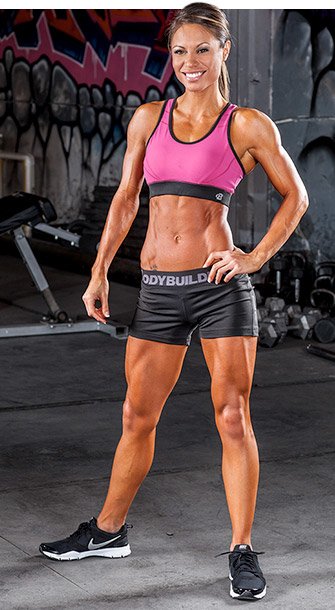 From an early age, Melody was involved in athletic activities like ballet, gymnastics, and martial arts. It wasn't until much later, when she underwent Army Basic Training that she discovered her true physical potential. Melody saw herself as a fairly tough girl, so she underwent airborne and air assault training to test her grit and prove she could pull her own weight.

When she delivered her daughter via caesarean section in 2011, Melody was told she'd never get her pre-baby body back. People even said she'd never see her abs again. (So much for those comments—you can now see Melody's six-pack in razor-sharp detail.) Led astray by these pessimistic thoughts, Melody leaned heavily on excessive amounts of cardio—running 7-10 miles per day—to help her shed pregnancy pounds.

Unsurprisingly, she initially lost a lot of weight, but never reached the "supermodel" body she longed for. Looking back, she remembers just appearing really skinny. One day, she chanced upon fitness model Jamie Eason while browsing Bodybuilding.com, and was inspired by Jamie's composure and muscular, lean frame.

After being awed by Eason, Melody turned to her bodybuilder fiance and said, "Wow, I need to get a body like this." He told Melody she needed to trade the treadmill for heavy iron and intense lifting. This was Melody's moment of "iron awakening."

Building muscle is a long process, but consistency and hard work pays off. "I started seeing muscle definition forming in my legs when I used to just have toothpicks for legs. It was motivating to see that," Melody says. She was content with continuing on this path to sculpting her body, but a friend at the gym suggested she enter a competition.

At first, she balked at the notion of competing. "Me on stage? In a bikini? There's no way!" But the seed had been planted. In time, this idea blossomed into a craving for a new challenge, a new goal. 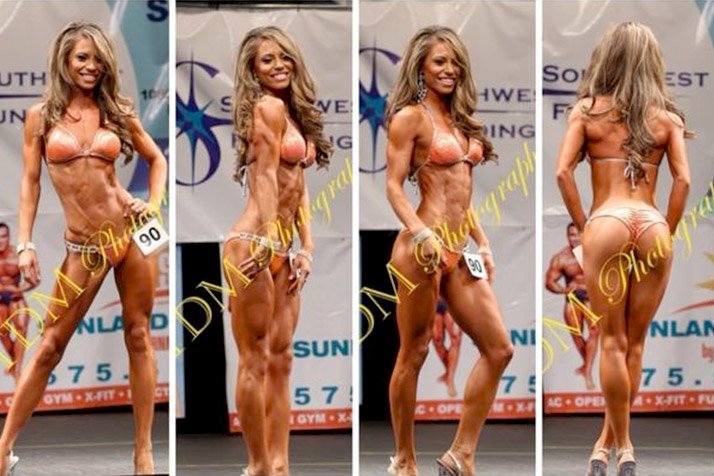 At first, she balked at the notion of competing. "Me on stage? In a bikini? There's no way!" But the seed had been planted. In time, this idea blossomed into a craving for a new challenge, a new goal.

"I didn't know what I was doing. I was just winging it," remembers Melody. She confesses that, since this was her first competition, she wasn't even sure whether to enter in the bikini or figure divisions, so she decided to enter both.

To Melody's surprise, she clinched first place in both divisions. Perhaps it was the combination of winner's euphoria and the proud culmination of so much hard work, but it was then that Melody fell in love with the whole sport of bodybuilding. She's now committed to living fit and spreading a positive message wherever she goes.

USING HER POWERS FOR GOOD

Since the beginning of her journey, Melody has wanted to inspire others. Through the power of social platforms like BodySpace, Melody spreads joy, confidence, and great ideas to people all over the world. After all, motivation and positivity can be contagious. Join Melody on BodySpace and start changing your life today!