The Basics Of Nutrition: Carbohydrates!

Sometimes I consider myself a guinea pig for bodybuilding, nutrition, and supplements. I am always looking for ways to make something work better then it already does.

Now all of us out there have heard the words carbohydrates, proteins, fats, water, and vitamins sometime during our lifetime right? Right, but how many of us know what they do, or anything about them?

First off, know that carbs, proteins, fats, water, and vitamins are the six classes of nutrients. Instead of talking about all six in this article, I will talk about one per article. In this first article, I will cover carbohydrates.

Carbohydrate is a compound that contains carbon, hydrogen, and oxygen. They are known to us as sugars, starches, and dietary fiber. Carbohydrates yield on an average about 4 kcal (kilocalories) per gram. For instance; if you eat a food that has 20g of carbohydrates in it, you are getting 80 kcal. Take 4 x 20.

A kcal, or kilocalorie is the heat needed to raise the temperature of 1000 grams (1 liter) of water 1 degree Celsius, or 4 cups of water by 2 degrees Fahrenheit. Carbohydrates are one of our main sources of fuel. Without carbs in your body right now, you would probably be walking around like a zombie; that is if you can even walk.

Our brain requires carbs to function, and our muscles require carbs to support intense physical activity, such as bodybuilding. Getting enough carbs throughout the day is very important, as the liver glycogen is used up in about 18hrs when carbs aren't consumed.

Glycogen is a white, tasteless polysaccharide (C6H1005)n. Glycogen serves as an energy reservoir, being broken down to glucose when needed. Now you are probably thinking, who cares! Here is why you need to know this. 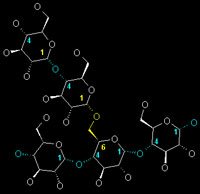 If you don't get enough carbs, the body is then forced to produce carbs from protein. And all of us know, we need protein to build muscles. So the point is, if you aren't eating enough carbs, you might as well kiss that protein good by.

The small remainder consists of bulk, or indigestible carbohydrate (fiber), which comprises primarily the outer covering of seeds and the stalks and leaves of vegetables.

If you are confused about all of this mumbo jumbo, don't worry. Just remember this.

50% of our energy comes from carbs.

Carbs have a protein sparing effect.

There are simple, and complex carbs.

If you are looking for a supplement with extra carbs, check out Endurox R4. It is composed of complex carbs, and is a good source of energy before a workout. Stay tuned for part 2 of The Basics of Nutrition, which will cover protein.

Currently I am working towards an Exercise Science degree at WSU, and will also be getting a certificate from the ISSA called Specialist In Performanc