Smoking: How It Will Limit Your Bodybuilding Success!

Of all the destructive habits one might pursue, cigarette smoking could, quite correctly, be considered one of the worst. Learn why and how it will kill you!

Of all the destructive habits one might pursue, cigarette smoking could, quite correctly, be considered one of the worst. Every bodily organ is deleteriously affected by the multitude of toxic compounds contained in tobacco smoke and this has prompted widespread anti-smoking campaigns and an increasing public intolerance.

The social ramifications of smoking are significant, with many employers now refusing to employ smokers, considering them a liability rather than an asset.

Smokers are also increasingly prohibited from engaging in their life-threatening pursuit, in places of employment and in public, on the grounds their habit will detrimentally effect others who are forced to smoke passively. Indeed, the damage smoking incurs, to both the smoker and those who are forced to smoke, includes: heart disease, cancer (of the cervix, pancreas, kidneys, stomach and lung) and digestive and respiratory problems.

Although the majority of deaths caused from smoking involve those who smoke directly, many thousands of innocent people are killed from side-stream smoke inhalation. In fact, second-hand smoke is ranked in the same harmful category as asbestos, radon, benzene (American Cancer Society, 2004). There are over 4000 chemicals and at least 40 known carcinogens (cancer causing substances) in cigarette smoke, and nicotine, the addictive drug contained in tobacco, leads to acute increases in heart rate and blood pressure.

Smokers are increasingly becoming ostracized, seemingly with good reason, as five-million individual smokers (BBC News, 2003) and thousands more passive-smokers (BBC News, 2004) deaths are attributed to smoking on a global scale per-year. These deaths seem extraordinary, given they are entirely preventable.

However, the anti-smoking message seems to have been ignored, and many are beginning this destructive habit, at an alarming rate.

Perhaps a greater focus on health from a holistic point-of-view would be useful in combating the upsurge in smoking. A multi-pronged attack on this scourge of society, encompassing health education and the encouragement of self-responsibility, might be the answer, when so many other methods have failed. However, even a wide-scale campaign focusing on all aspects of health and social responsibility is probably too simplistic.

Bodybuilding As A Quit-Smoking Method?

A mandatory gym program, as absurd as it may sound to some, might just provide part of the answer for one who is oblivious to, or lacks the motivation, to quit smoking. Through a sustained weight-training regime, one would begin to take greater pride in their physical appearance and performance levels.

This might force them to confront the realization that smoking is detrimental to their health. They will feel tobaccos negative effects in a more pronounced way, as their performance suffers and their results are not as forthcoming as they otherwise should be. Indeed, the average non-exercising smoker does not have such a bench mark to which they can compare the before and after effects of smoking. 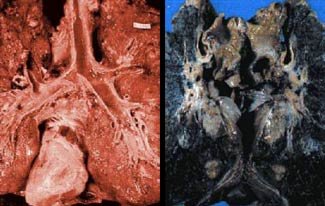 For example, when demand for oxygen is elevated, such as during exercise, this increased resistance is more noticeable. Reduced lung capacity can cause a smaller volume of oxygen to reach the alveoli, resulting in impaired gas exchange and less oxygen in the blood. A heavy set of squat, for example, will completely frustrate the bodybuilding aspirant who chooses to smoke. Ultimately a decision will need to be made and, if this person chooses to continue with training, smoking cessation will necessarily need to take place.

One has the feeling that smokers are not entirely conscious of exactly what their habit is doing to them. Becoming knowledgeable in the areas of human physiology and health, through extensive study, or simply joining a gym and taking a vested interest in what many take for granted (their health), could be a realistic first step.

Bodybuilders, by virtue of their commitment to physical excellence, typically do not smoke (at least as far as my observations are, and much anecdotal evidence is, concerned). Smoking not only reduces ones capacity to perform the work required to obtain a great physique, it also directly prevents cellular growth and restricts oxygen and nutrient uptake (to mention but two limiting factors).

Therefore, as one, more pronouncedly, notices the restricting effects of tobacco, the desire to quit would conceivably be stronger. At the very least, a greater appreciation for ones health will be obtained and a strengthened mind-set which inevitably would result in a more logical outlook, and the possible cessation of smoking.

Over the years I have personally trained, and advised, a large number of smokers, and have found the biggest determining factor in their decision to quit is the impact tobacco has on their performance. With bodybuilding, a reduction in performance means a more tangible result in the form of an inferior physique. This reduction in performance is compounded by the fact that tobacco directly destroys all of the body's cells. This includes muscle cells folks.

Tobacco Has The Following Impact On Performance:

Just What Are You Inhaling?

The effect smoking has on performance can be attributed to the synergistic effect of over 4000 chemicals and 40 known carcinogens. The following are just some of these.

First, Some Of The Cancer Causing Agents: (carcinogens)

Oh yes, and these; just some of the 4000: (source: Arizona smokers Help-line)

You Are Hurting Yourself & Others:

Getting Ready To Quit:

The Day You Quit:

For more information about quitting, call 1-800-4-CANCER, the National Cancer Institute's toll-free Cancer Information Service, or 1-800-ACS-2345, the American Cancer Society's Cancer Response System, or look in your local phone directory for smoking cessation resources that may be available in your area.

Smoking is clearly a destructive habit, which kills millions of people annually. Despite this fact, however, an increasing number of people are becoming addicted. This moves one to ask the question: why would one purposefully, and voluntarily, subject themselves to such a poisonous substance.

The addictiveness of tobacco is such, that quitting is immensely hard and any excuse is often used to justify the continued poisoning of oneself, and others. A greater focus on physical fitness and appearance might compel one to quit smoking for good.

The discipline and bodily appreciation, developed through a sustained bodybuilding program, will likely encourage a greater awareness of ones fallibility, and promote a healthier lifestyle overall.