Everyone wants a six-pack of abs right? Learn some myths about ab training and what exercises you need to know to start producing results!

Everyone wants a six-pack of abs right? Well, maybe not everyone, but you get the point! Most people think that training their abs will somehow make them appear, as if the fat will suddenly disappear. This myth, is referred to as spot-reduction, which is alive and well, however it's completely false.

You can work your abs until hell freezes over, but if you still have a layer of fat, or in some cases even a beer belly, you will never be able to see the muscle. So, from a visual sense you must use proper diet & nutrition to actually be able to see your abs, and that is an entirely different article and beyond the scope of this one. 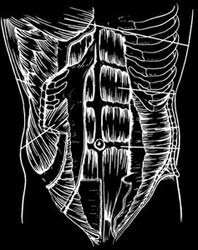 We all have abs, the technical name is Rectus Abdominis. It's basically the "core" of your body and you could not really function without this muscle. Did I say muscle as in a single muscle? That's right the Rectus Abdominis is a single muscle (see diagram) that attaches from along the rib cage down to the pelvis bone.

However, there are two other muscle groups that complete the abdominals: the Transverse Abdominus, and the External and Internal Obliques, but these two muscles are not the visible portions of the abs that make up the "six pack" that we all desire.

The Transverse Abdominus acts as a natural weight belt, keeping your insides in; and the Internal and External Obliques work to rotate the torso, and stabilize the abdomen essential for trunk stability.

Since the Rectus Abdominis is a single muscle it is physiologically impossible to work different parts of the abs. You often hear people say things like "I need to work my lower abs cause they're lacking", well they can try as hard as they want but when you train your abs you train the entire muscle.

This does not mean you should not incorporate a wide variety of abdominal exercises (crunches, leg raises, trunk rotation, etc.) into your ab training, I just wanted to make the point that you are not going build or develop any one part of your "six pack" with different exercises.

Now, remember that the lower area of the abs is a common problem in regards to excess fat storage for most people, especially males. So often the problem is not the abs per se, but extra body fat in that area that is covering the lower portion of the abs, again this requires dietary alterations not specific exercises.

MYTH: How come I feel it more in my lower abs when I do hanging leg raises?

So, you may say "how come I feel it more in my lower abs when I do hanging leg raises?" Well, this is another myth that we call the "I feel it syndrome", which basically states that because you feel something working in a specific area it will make that area grow more. 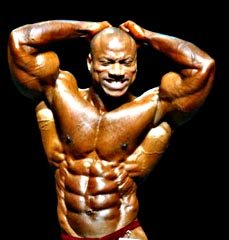 From a muscle physiology standpoint this is not possible. It's possible that because of the angle more stress is being applied to a certain area of the muscle, which is often a result of that part of the muscle being stretched more, causing micro trauma in that specific area. However, this means absolutely nothing in regards to muscle growth and development.

Do not confuse this with muscle groups that contain separate heads and tendon attachments, in those cases it is possible to stress individual heads to certain degrees, an example would be the deltoids.

As far as our abs are concerned it is a single muscle and therefore it will grow as a whole. Think about it this way, if you could stimulate one area of a muscle and make it grow that would imply that you could actually change the shape of a muscle, which we know scientifically, that is not possible.

There are many exercises that can be used for the abs, the easiest and most common is a crunch, which essentially is bringing your hips and rib cage together, no more than just a flex of the mid-section. Do not confuse a crunch with a traditional sit-up; in a crunch you do not lift your lower back off the floor or bench.

If you're a beginner and are training abs for the first time I would recommend that you begin with a simple crunch on a flat surface, and some standing trunk rotation without any weight. Until you build up your abdominal muscles and flexibility do not try any advanced ab exercises such as weighted or incline crunches, or even sit-ups.

Doing a sit-up has less of an effect on your abs, and more of an effect on your Iliopsoas or more commonly called the hip flexors. In fact, this is the muscle group that people often mistake for their lower abs because it's a synergist muscle that helps stabilize the mid-section when working your abs. This is not to say that these synergist muscles are not important and do not need training, I am just pointing out that most likely that is why you think that you "feel it" in your lower abs.

Why Is Ab Training Necessary?

Weak abs can contribute to lower back problems; the abdominal muscles help to improve the Erector Spinae by improving the mechanical positioning of the pelvis when it's tilted forward. Also, if the abs are weak the lliopsoas can pull on spine during hip flexor activities causing injury.

Weak abs can also be the cause of chronic low back pain, and can be responsible for hyperlordosis. So, no matter what your goals are, general fitness, bodybuilding or even power lifting it's extremely important to have strong abdominals not just for aesthetic purposes, but functional and injury prevention reasons.

People often ask how often should you work your abs. Well, remember that the abdominals are a muscle and they require recovery just like any other muscle, although they do recover relatively quickly compared to other muscles due to their inherent fiber type.

If you're training your abs from an injury prevention perspective then you could train them 3-4 days per week using light loads, e.g. non-weighted crunches, performing 3-4 sets.

However, if your goal is to develop your abs either for bodybuilding or sport performance, then you should only train them 2-3 days per week using more advanced techniques, e.g. weighted incline crunches performing 6-8 sets.

As far as when to train the abs, it really does not matter; you could train them at the beginning of your workout if you're prioritizing them.

However if you plan to fatigue them it may be a better idea to work them last. Since the abs play a major role in stabilization it could hinder performance in compound lifts such as squats. An even better idea if feasible for you would be to train them on a day where you work smaller body parts and no compound lifts that involve the entire body.

These are only a few of many exercises that can be used in your abdominal training.

* Shown without cable.
** Add medicine ball or dumbbell for weight.

Be sure to also check out:
All About Calories!

Rob DiMaggio is the founder and formulator at Ironmag Labs, and the creator of IronMag.com