Dan Solomon takes a look at the drama in the IFBB. Find out what is happening, how it got started and more...

The world of professional bodybuilding was turned upside down in recent weeks as stories began to trickle through the proverbial grapevine about a shakeup within the federation that governs the world's premier bodybuilders. The news came fast and furious.

When Did It Start?

The first domino fell during the weekend of April 24th when I received a text message from athlete representative Shawn Ray. The message, comprised of just eight words, said, "Wayne DeMilia has been canned by the IFBB."

I've been around bodybuilding long enough to know that only about 5% of all information is derived from credible sources. The rest is typically a work of extraneous fiction. During a 45-minute phone call with DeMilia he confirmed that issues had arisen between him and IFBB president Ben Weider. In other words, this rumor was actually true! Wayne DeMilia, a prominent fixture in professional bodybuilding, is no longer affiliated with the IFBB.

The story was only beginning. Just a short week later, the bodybuilding world arrived in Orlando for the inaugural Xtreme Pro Challenge. After days of speculation, Wayne offered up an "on the record" statement to a room filled with athletes and media:

DeMilia confirmed that he is no longer an officer of the IFBB. As he summarized, there were financial issues related to the Olympia that forced him to closely evaluate his agreement with the IFBB.

DeMilia explained that when he requested a modification of the agreement, he was told that his services would no longer be needed in any capacity. DeMilia went on to explain to the room that the IFBB and the Pro Division are two independent entities. Although he is no longer affiliated with the IFBB, the aforementioned "Pro Division, Inc." remains within his control.

At the time, DeMilia was reluctant to provide additional details until things were finalized, however, he was very clear that the future would likely see the birth of a new governing body for professional bodybuilding. In one telling moment, DeMilia explained "there will be a contest at the Mandalay Bay in October, but I can't yet say what it will be called."

The room was at attention as DeMilia delivered his version of the events. Following the meeting, individual opinions varied, but there was one thing that everyone seemed to agree upon. When the dust settles, the athletes would benefit by any type of bidding war, regardless of who lands in the driver's seat.

Over the coming days, there was rampant speculation as to how the federation would respond. A game of chess was now underway. The IFBB remained silent for nearly 3 weeks after DeMilia's Orlando comments.

Fast forward to May 20th, just 2 days before DeMilia's annual Night of Champions. After weeks of speculation and anticipation, the IFBB issued three formal press releases. To summarize:

Press Release #1 announced a formal joint venture between the IFBB and A.M.I., the same company who recently shelled out a cool 350 million to acquire Weider publications. 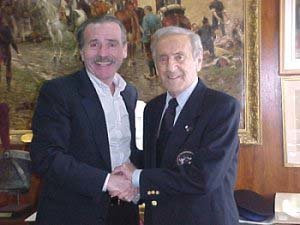 David Pecker and Ben Weider seal the deal with a handshake

Press Release #2 confirmed the removal of Wayne DeMilia from the IFBB. The announcement clearly explained that DeMilia "is no longer associated with the Joe Weider IFBB Olympia competitions or with any other IFBB event or activity".

On the surface, it would seem that the IFBB's announcements would put an end to further uncertainty and speculation. Think again.

This past weekend, as I sat in my 2nd row seat for the Night of Champions, I couldn't help but notice that I was seated among several IFBB contest promoters, including Jim Lorimer who produces the annual Arnold Classic in conjunction with Arnold Schwarzenegger. This is where things start to get complicated.

Schwarzenegger was recently named Executive Editor for Flex and Muscle & Fitness Magazines. Both publications are owned by AMI. Meanwhile, Arnold's partner Lorimer is perceived as attending the N.O.C. as a show of support for DeMilia. The plot thickens.

In a strange twist, DeMilia launched his new "Pro Division" website. On the front page of the site, the following message appears:

"Pro Division, Inc. is not affiliated with any Bodybuilding Federation. It is made up of registered athletes, promoters, judges and officials. Pro Division contests will go on as scheduled."

The message is followed by a list of events that includes several IFBB sanctioned contests, including Lorimer's Arnold Classic.

In the latest development, on May 26th, the IFBB issued a formal notice to all athletes. The message, which can be found at the IFBB's website, states:

"all IFBB professional Athletes, Judges, Officials and Promoters must possess a valid IFBB Professional Membership Card in order to compete, judge, promote or otherwise officiate at an IFBB-sanctioned professional competition.

The announcement concludes with a stern reminder to its members:

"Any IFBB professional athlete, judge or official who participates at a competition or event not approved or sanctioned by the IFBB may be fined, suspended or expelled. As per Article 14.9 of the IFBB Professional Rules."

Bodybuilding, a sport of strength, power and strategy;

Flex your muscles gentlemen, this will indeed be a pose-down for the ages.

Note from the writer - the events outlined in the preceding article are current as of May 26th. Visit www.ProMuscleOnline.com for all the latest developments from the world of pro bodybuilding!

Get the latest pro news from one of the biggest names in bodybuilding. Find out what is going on in the world of pro bodybuilding!