Complete Arm-Training Guide: Anatomy And Physiology Of The Joints (Part 2)

This article is addressed to those people who want to train the arm muscles with the appropriate kinesiology and biomechanic backed knowledge. Learn exactly how the arm works and more right here!

After reading it all thoroughly and accurately you'll realize how the scientific knowledge is the most powerful weapon for being successful. This knowledge is able to change your mind, your views, and your body (thus your whole life) like no other!

Anatomy And Physiology Of The Joints

The freedom to move part of the upper limb is constituted by 2 parts, one superior and one inferior.

The arm is constituted by the "Humerus bone" which articulates superiorly with the "Scapula bone," forming with it the "Scapulo-Humeral" joint (one of five joints of the shoulder). 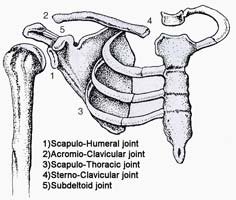 The forearm is constituted by 2 bones:

The Ulna and Radius articulate superiorly with the Humerus to form the "Elbow" joint. The distal end of the Radius (only) articulates inferiorly with the 3 proximal bones of the Carpus (Triquetral, Semilunar, Scaphoid) to form the Radio-Carpal joint (also known as the "Wrist joint" or "Articulatio Radiocarpea").

The movement analysis occurring at the elbow and shoulder joint levels and the knowledge of the relative muscles that act on them is the first step to understand what kind of movements are required to stimulate the arm muscles when using gym equipment.

Movements Of The Elbow Joint

To skip the detailed explanation of their meaning click here.

Reference position is achieved when the longitudinal axis of the arm and forearm are in the same line. 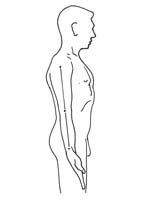 Flexion is the movement of the forearm anteriorly toward the anterior aspect of the arm. 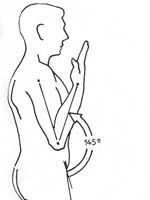 Extension is the movement of the forearm posteriorly. 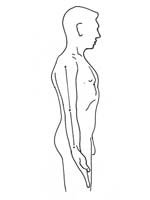 Supination is achieved when the palm of the hand faces upward and the thumb points laterally. 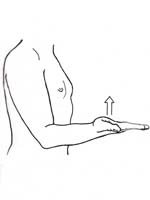 Pronation is achieved when the palm of the hand faces downward and the thumb points medially. 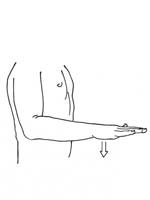 Neutral rotation: is achieved when the palm faces medially and the thumb points upward. 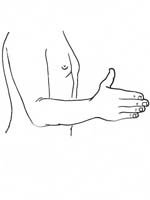 Supination and pronation of the elbow and forearm are the same since it is the radius that rotates around the ulna by means of the "proximal radius-ulnar joint" (one of the three joints that constitute the elbow joint).

Movements Of The Shoulder Joint

To skip the detailed explanation of their meaning click here.

Reference position (for evaluating: flexion, extension, abduction, adduction): To evaluate the flexion-extension and adduction-abduction movements the shoulder must be considered in its reference position; that is to say with the upper limb hanging vertically at the side of the trunk. 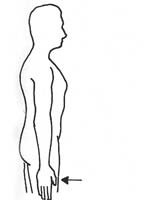 Flexion: movement of the upper limb frontward, on the scapula plane, away from the trunk. 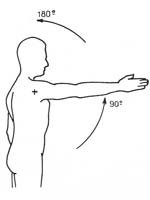 Extension: movement of the upper limb backward, on the scapula plane, away from the trunk. 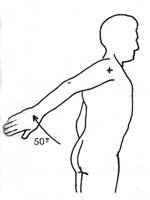 Abduction: movement of the upper limb laterally away from the trunk. 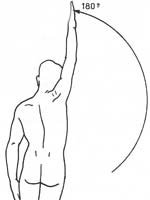 Adduction: movement of the upper limb medially toward the trunk. 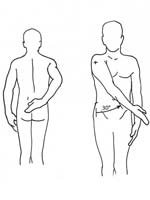 The figure "Shoulder adduction" is representing the range of "absolute adduction" - that is the movement of the upper limb medially toward the median sagittal plane starting from the shoulder reference position.

Instead the "relative adduction" is the movement of the upper limb medially toward the median sagittal plane starting from any position of shoulder abduction.

An example of "relative adduction" is represented by the concentric phase (downward phase) of the pulldown at the lat machine.

Furthermore, the arm must be internally rotated to 30° with respect to the "true reference position" in order to reach the point of equilibrium between the rotator muscles. This position is called the "physiologic reference position" (30° internal rotation).

If the elbow is not flexed to 90°, the rotatory movements of the arm are compounded with those of pronation and supination of the forearm, leading ultimately - in such case - to the inability of evaluating the exact degrees of motion occurring in reference to the arm. 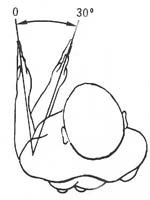 Axial Rotation Of The Arm: 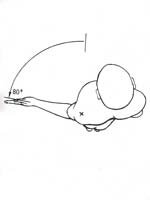 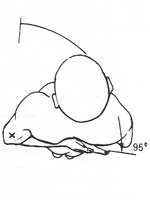 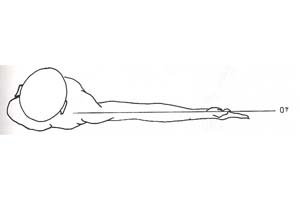 Horizontal flexion: the shoulder is abducted at 90° with the elbow extended (movement of the upper limb on the horizontal plane toward the median sagittal plane). 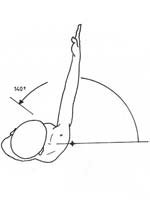 Horizontal extension: the shoulder is abducted at 90° with the elbow extended (movement of the upper limb on the horizontal plane away from the median sagittal plane). 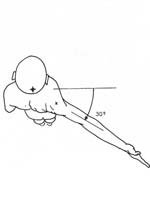 Arm Muscles Involved In The Movements Of The Scapulo-Humeral Joint

Flexor Muscles Of The Elbow:

I started lifting at 17. The first contest I entered I got 3rd, the second I got 2nd, and the third I got 1st!