Looking for a new way to maximize your strength and mobility at the same time? Drop the weights and use what God gave you. It’s harder than you think!

As a skinny kid growing up in Brooklyn, New York, I wanted to make myself look as intimidating as possible. My family lived in a rough area and I didn't want to get into trouble, so I started working out when I was 13 years old. In those days, the only aspect of strength training that concerned me was building mass. I was scrawny at the time, and I just wanted to look big and strong so people would stay out of my way. If I actually got fit along with it—well, that was just a nice side effect. 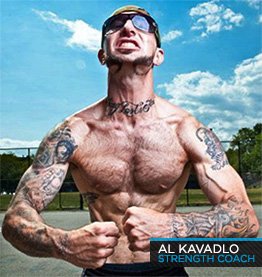 In the beginning, push-ups and pull-ups made up the majority of my workouts. I wasn't getting as huge as I wanted to, though, so I started lifting weights. Barbell exercises like bench presses and curls became a big part of my training. I also started using machines to work my chest and arms. I even screwed around with smaller isolation movements like wrist curls and shoulder shrugs.

I still hadn't tried working out my legs though. I was more interested in looking strong than being strong. Like most teenage guys who pursue lifting, I figured there was no reason to bother working my legs when I wore pants all the time anyway.

As I progressed in my training, I came to love working out. I even discovered the joy of training legs. Few things can match the intensity of picking up a heavy-ass barbell. Deadlifts, squats, and lunges soon became three of my favorite exercises, though I also used lots of machines to train my legs.

I was eating as much as I possibly could, and by my early 20s, I finally started to put on a little bit of mass. It was around this time that a buddy of mine first showed me a one-legged pistol squat, and my eyes were truly opened!

Like most people who see this move for the first time, I underestimated its difficulty and wound up falling on my ass in an overconfident initial attempt to mimic what I'd witnessed.

It didn't matter that I could comfortably squat a barbell with more than 100 percent of my body weight for 10 full reps, or leg press nearly half a ton. I still wasn't able to do one pistol!

This was my first inkling that maybe there was more to bodyweight training than I had been giving it credit. 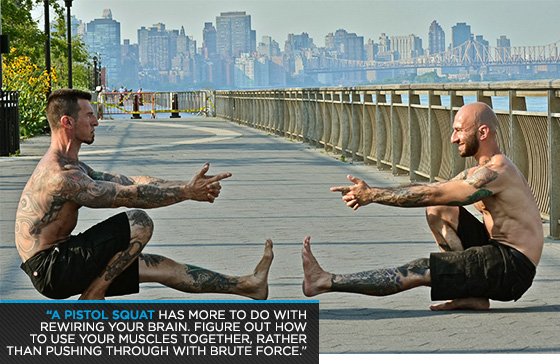 I came to learn that performing a pistol squat has more to do with rewiring your brain to the movement pattern and figuring out how to use your muscles together, rather than simply pushing through with brute force. Though a barbell squat is far from an isolation movement, the full-body harmony required to perform a pistol is on a whole other level.

I quickly realized that there is a certain amount of grace and control that is essential for advanced bodyweight skills that is lacking in more conventional forms of strength training. I eventually managed a sloppy pistol squat after a few weeks of practice, but I spent years gradually refining my form before I could confidently perform multiple, clean reps.

The pistol squat made me realize that bodyweight exercises should still have a place in my workouts. But it was an exercise called the muscle-up that really changed the game for me.

As with the pistol, the first time I saw a muscle-up, I was impressed, but I still thought it looked simple. Once again, I vastly underestimated the difficulty of this new move. After all, I was already strong in my upper body; I could bench press my body weight for 10 solid reps, and I could bust out pull-ups and dips like a trooper. Though I expected the muscle-up to come fairly easily, I repeatedly failed at it for a long time.

Just like the pistol, I eventually figured out how to do a few ugly reps, but it took years to refine the muscle-up to the point where I could do it cleanly and with control. Once again, it wasn't as simple as possessing enough raw strength to pull and then push my body up and around the bar; it was about learning how to use my muscles together to properly apply that strength in a unique functional context.

I still occasionally use weights in my workouts. I haven't abandoned traditional squats and deadlifts, for instance. Yet bodyweight exercises have constituted about 90 percent of my strength training regimen for the last several years. Bodyweight training challenges and excites me in a way that lifting external weight never did. I'm no longer concerned with getting huge or looking jacked. Now, I'm interested in learning to move my body skillfully and efficiently.

I've come full circle in my training. I once trained to look a certain way; I now train for functional strength and performance. If I happen to have a good-looking body, it's just a nice side effect.

If you're ready to begin the never-ending journey to master your body weight, I urge you to heed the following guidelines. I'm not a fan of dogmatic principles, but these three simple precepts are tough to ignore. In fact, these bodyweight rules can help you in just about any type of strength training.

If you've spent any time in conventional gyms, you've no doubt seen people moving from station to station in an attempt to work each individual muscle group with separate exercises. If you're following a bodybuilding program, this may be the type of training you're used to.

As I described in my humbling journey to learn the pistol squat and muscle-up, you have to use your body as one cohesive unit to achieve any type of advanced bodyweight exercise. Believe it or not, pistols and muscle-ups are just the beginning.

Total body strength is the key to achieving jaw-dropping feats like one-arm pull-ups and the human flag, but it also helps to learn how to engage your abs, glutes and legs during basics like push-ups and pull-ups. Though certain exercises obviously emphasize certain body parts more than others, you'd better believe my glutes are engaged during a muscle-up and my lats fire each time I bang out a pistol.

The most common mistake I observe with bodyweight newcomers is trying to do too much too soon. Just like I thought I'd be able to jump in and immediately do pistols and muscle-ups, almost all bodyweight beginners overestimate their capabilities.

The key to improving with bodyweight training is to find appropriate exercise variations that allow you to progress gradually. Bodyweight training forces you to set aside your ego and respect your limitations. Unfortunately, many people don't heed this warning until they're elbow-deep in tendinitis.

Respecting your body also means avoiding excessive food and alcohol consumption. A person who carries a lot of body fat will never progress to advanced bodyweight exercises. The training is only half the battle.

If you've gained weight and your deadlift is going up, but your pull-ups get worse, you haven't gotten stronger pound-for-pound. You just improved your leverage to pick a weight off the floor by making yourself heavier. Bodyweight strength training keeps you honest.

There are no shortcuts in the strength world. It takes patience and hard work to make improvements. Some workouts will be better than others, but try not to beat yourself up when you have an off day. It's important to listen to your body and rest when you need to. Forcing out more reps won't help you if you injure yourself in the process.

It takes years to achieve high-level bodyweight strength, but the only way to get there is by being patient and taking things one day at a time. Forget about reaching your goals based on a predetermined timeline. After all, goals are just a fantasy. The training that you do each day is real.

Al Kavadlo, CSCS, just released the e-book Pushing the Limits: Total Body Strength with No Equipment. He is also the author of the recent book Raising the Bar: The Definitive Guide to Pull-Up Bar Calisthenics, and the accompanying DVD. This June, he will be leading a Progressive Calisthenics Certification Workshop in St. Paul, Minnesota. For more information, go to AlKavadlo.com