Tabitha's newfound love for lifting heavy led her to make the leap to competing on stage. Read on to see how her support system cheered her on along the way.

In 2008 I weighed 190 pounds. I was tired of being tired and finally decided to make a change and lose some weight. Within a year I had dropped 40 pounds by eating better, eating less, and cutting back on bad food. Nothing formal, just making better choices. After that year of losing weight, I met someone who convinced me to join a gym for the first time.

I had tried all of the girly-type workouts before and nothing had clicked, but once I started lifting weights I was hooked. I lifted five times a week for a good year. And I loved lifting heavy! Squats, deadlifts, barbell rows, and bench presses quickly became my favorite exercises. But eventually I started finding myself frustrated.

I wasn't seeing the physical changes I desired and I was struggling to stay focused without a goal. I had joined the gym in March. In November 2009 I went to my first NPC Competition. I took one look at the women bodybuilders and said "I can do that, right?" The seed was planted. In January of 2010, I met with a trainer about helping me with my nutrition. She told me she was putting a team together and the rest, as they say, is history.

Armed with a meal plan, a workout plan and a deadline I was unstoppable. I continued to work out 6 days a week while completely overhauling my nutrition. I had always heard that once I fixed my nutrition the changes would be immediate but I hadn't really believed it. Within a month of following my meal plan I became a believer. 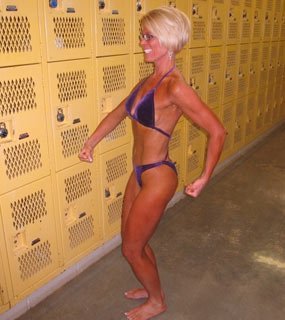 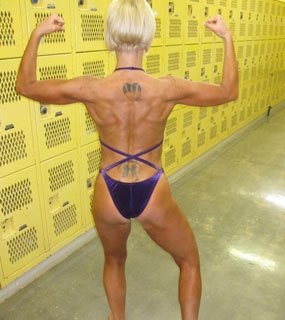 360 degrees at 425 degrees. Confused? Tabitha is hot all the way around!

My previous struggles had always been with the nutrition. Once I had a guide to follow I was good to go. I followed my plan to the letter and I was very excited about how refreshing it was to eat clean. My competition date was set for May 2011. I had five months to transform my body.

I was so fortunate to have Niki Bryant from B-Xtreme Fitness as my coach and mentor. They helped me put together my routine, held weekly posing practices, and the other members of Team X-Treme became my partners in crime and wonderful support. I also have the most amazing workout partner/trainer (and partner in life) Mike Weber. He got me started on lifting, helped me plan out my workouts, spotted my lifts, cheered me on, and kicked my butt when needed.

I continued to lift heavy getting my barbell squats up to 250lbs and my leg press over 500lbs. And when I was finally able to do unassisted pull-ups I was beyond thrilled! I was stopping traffic at my meat-head gym (old warehouse where chalk and grunting are encouraged). And the sidelines were packed with my three daughters, extended family and friends. A girl could not ask for more in the way of support on the road to achieving her dreams. One thing I did that kept me positive and motivated was follow Niki's plan to weigh in only once a week and take weekly progress pics.

By following this rule I avoided becoming obsessed with the numbers on the scale and I was able to see the changes and progress in my pictures each week. Lo and behold, May 6th came around and there I was, on stage, in this very small suit, strutting my stuff like I was born to be there. I placed 6th out of 8 competitors in Masters Womens.

I only know my placement because Niki and Mike asked me to look. Otherwise, I considered myself a winner from the minute my bare foot hit the stage floor and I am convinced not even a trophy would have made that day any better.

Looking back I think the decisions I made for myself that I would suggest for others would be to surround yourself with people that support you and can help you achieve your goal. I needed someone to tell me what to eat, how much to eat, and when to eat so I hired someone. I also wanted a posing coach, so I found someone. Lucky for me this was all one in the same person. If you can find a team to join, I would.

People who have never experienced this really can't understand the ins and outs of what you are going through. A team is going through it with you and understands your mood swings, focus, dedication, desires. My once a week posing sessions were like therapy for me, just being surrounded by like minded people. Once you have your support system in place don't solicit advice from everyone else on the planet. I see so many people sabotage themselves this way. 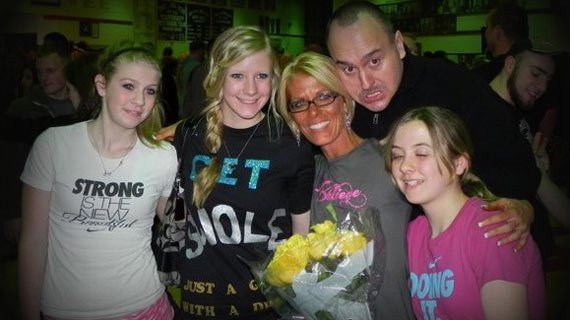 Talk about a fitness photobomb!

There are so many schools of thought and everyone believes there way is the only way. If you start second guessing your trainers or coaches you will make yourself crazy. And the last thing is know that you are going to have to be selfish with your time for a season and it is okay!

Women especially feel so guilty if they aren't being everything to everyone. Take advantage of your pursuit of this goal and use it to embrace the opportunity to focus on you and doing something just for you. It really is an amazing journey and I am so glad I experienced it. I am planning to compete again May 2012. I love the fact that little ole me, never an athlete, never very coordinated, can get in a gym and be fierce and challenge myself to reach the next level.

I was scared to death but I didn't let it stop me. I thought I was going to throw up going on stage to pose in the morning and then again doing my routine at night. But I never did. And had I never tried, I never would have known! Live outside your box. All the fun stuff happens there.

I completed my training for the competition and maintained a 5-6 day per week workout schedule while working full time as a teacher, taking a full time load of college courses, and being a mom to three very busy teenagers that all play sports and have their own schedules that require my presence and dedication as well. So while many people use time as an excuse...it is only an excuse. Where there is a will, there IS a way!