Having to choose between his two loves of soccer and bodybuilding, he chose to keep his eyes on the prize and do whatever it takes to achieve his goals.

I began lifting during the summer after my sophomore year of high school. I played soccer and wanted to play in college, but I needed to get bigger. When I started lifting, I became more dangerous on the field because I was stronger and faster than my opponents.

I stuck with it long enough to begin to see changes in my appearance, and all of a sudden, I was addicted to picking things up and putting them back down. I began working out with my friend Anthony in his basement home gym. Getting together became a regular occurrence after school had been over.

This went on for probably a year and a half until we began going to a Planet Fitness (it was cheap and we were spending our money on supplements—don't hate). Throughout the process, we had friends that wanted to lift with us but fell off like flies after some time. It became apparent to me that my training wasn't for everyone, and I liked that.

I firmly believe that consistency is the key to accomplishing any goal in bodybuilding and in life in general. I lifted every day and took a rest day maybe once every 10 days. I pushed myself every day because I knew that change would eventually come. Soccer and bodybuilding constantly vied for my attention. Being born in Rio de Janeiro, Brazil, I lived and breathed soccer. Once I got into bodybuilding, the sport and thrill of seeing my body transform sank their teeth into me.

The problem is that soccer and bodybuilding don't go together very well. I wouldn't be very fast if I were very big, and soccer's nature of being an endurance sport wouldn't allow me to get as huge as I want. So in my senior year I decided that I was going to aim for college soccer and put bodybuilding on the back burner. I scored 26 goals my senior year of high school and went to play for Walsh University my freshman year.

After the season ended in November, I went back to lifting, and decided that I could be a bodybuilder again and do my first show in March. When I place 3rd in teen's physique and 7th in men's physique at 18 years of age, I decided I wanted to stick with competing. I have since left Walsh University to focus on bodybuilding full-time while attending Ashland University.

When I was cutting for my first show, I had to learn a lot about how my body reacted to certain foods. Also, I had develop a lot of self-control when eating. While my roommates were drinking milk shakes, I stuck to protein shakes. When they went to Taco Bell, I was eating rice and chicken. It was a little difficult, but I kept my eye on the prize and I believe I accomplished what I set out to do at the competition: bringing home a trophy. 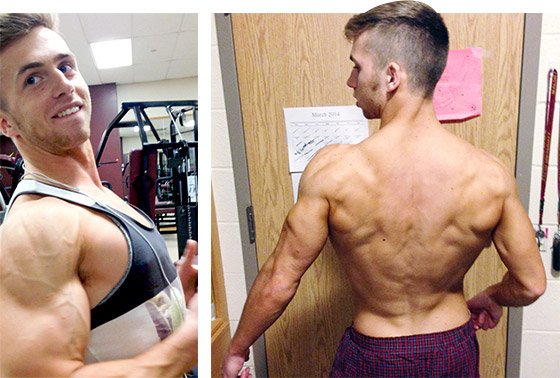 "Don't be scared of what people think. They'll be asking you for help soon—trust me."

I plan to compete in two contests in October, and then I want to focus on gaining for a while. I am majoring in Exercise Science in the hopes of getting into Physical Therapy school. I also am planning to get certified as a personal trainer, using it as a way to help pay for grad school. Eventually, I want to own my own Physical Therapy clinic/gymwith my buddy, Anthony. Fitness and health will always be a priority for me.