Eric Gibson was a business major until he realized that he had more business being a health, fitness, and exercise science guru. Once he found the stage, he was hooked.

I decided to change my physique when 16 years old. I had played football the past few years and was, obviously, a linemen. I stopped playing football after my sophomore year of high school and noticed my weight continued to go up a little bit at a time. After my 16th birthday, I remember standing in the bathroom looking in the mirror and thinking, "What happened...?" I had always been the short chubby kid growing up but this was a whole different story. 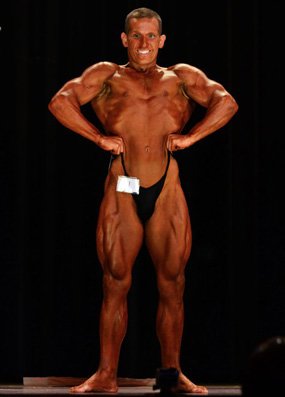 From that day on, I decided that I was going to do research on how I should be eating and working out so I can lose weight and hopefully like my physique one day. I picked up a couple of fitness magazines from the store and searched the web for bodybuilding information. I found myself on Bodybuilding.com.

After learning all that I did from the website and the few magazines I would pick up every month, the weight started to come off. It steadily came off for 2 years! Having a much better grasp on nutrition and training helped me achieve my goal of being healthy and looking better.

When I got to college, I was a business major. Halfway through my 2nd semester, I was talking to my sister and explaining something about nutrition to her. She then asked, "What are you doing being a business major?" She told me I should follow what I love and that was health and exercise. I changed my major to Exercise Science as soon as I could.

The next year I lived across the hall from a guy whose brother was a bodybuilder. I became friends with them both and my new bodybuilding friend encouraged me to compete. I had always wanted to compete since I started dieting several years ago but I always saw Dexter Jackson, Jay Cutler, and Phil Heath in the magazines and thought I had to look like that to get on stage.

Later that year, I competed in NPC Indianapolis in 2008 and won the Lightweight Open class. As soon as I stood on stage for the first time, I knew I never wanted to leave.

First and foremost, I have to say that I could not and would not have the success in bodybuilding that I have today if it weren't for my family and my fiancé. Without their love and support nothing that I have done could have been possible. They are the people that will be there whether I'm 2 weeks out from a contest or 20 weeks out, I can always count on them for support when I need it most. The first thing that made the big difference in my journey was them. 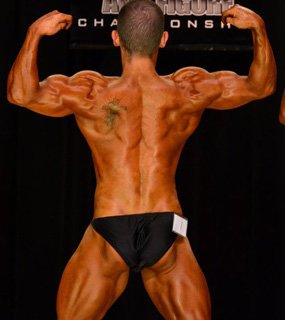 After that, I changed my physique drastically by being consistent with my training and more importantly my nutrition. I have experimented with nutritional strategies and training theories and found out what works best work my body. This entire journey as a bodybuilder was more or less learning what my body wanted to do in the first place. As human beings, our body does want to be lean and muscular! I found that eating lean protein sources 5-8 times a day, having moderate fats, and lower carbs have worked the best for my body.

When it comes to fat I like to focus on the "good fats" from fish oil and nuts. When it comes to carbs I usually go for something like brown rice or sweet potatoes unless it is post workout. I train anywhere from 4-6 days a week and have had great success with training once a day as well as two. The key to training is change and variation. I have the best success with changing my workouts every 3-6 weeks and it also keeps me from getting bored in the gym doing the same stuff over and over.

Getting ready for the 2011 season, I was working at a gym as a personal trainer and working with my bodybuilding mentor Austin Dossey. You may have heard of Austin from his girlfriend Jacqueline Zediker, she's a WNBF Figure Pro and Optimum Nutrition Sponsored Athlete. I never had the opportunity in the past to surround myself with such dedicated athletes like the team I had somehow surrounded myself with today.

I can honestly say that by surrounding myself with people that are as dedicated and driven as I am, that it made contest prep significantly easier. I always had someone to talk to that was going through the exact same struggles as I was. I have met some of the best people I know through working at that gym and if the WNBF gave out pro cards to people for just being dedicated and working extraordinarily hard, we could think of a few people that would be pros already.

The last 2 years I have been competing in the INBF and have continued to make progress by finishing runner up to a pro card 3 times in 2011. I've competed seven times in the last 4 years and bodybuilding has saved my life.