Body Transformation: 40 Is The New Sexy!

Maria made age 40 a milestone to remember. She embraced competition discipline and busted out of her shell into a new body!

It's often said that life happens outside your comfort zone. My entire life has been spent in that safe, happy place, which caused me to miss out on many opportunities. I was an introvert who never tried out for cheerleading, sports, or theatre because I never wanted to put myself "out there."

At age 35, after struggling with infertility for many years, I was given a beautiful little girl. She is my miracle baby. I see so much of me in her; in appearance and personality. As children, we possess a carefree quality that we lose as adults. My daughter has always been carefree and unafraid to try new things. By age five, she did gymnastics, soccer, and danced and performed in her first spring recital.

One day, my daughter said she was afraid to do something because she was shy. It stopped me in my tracks. As her mother, I want more for her and want her to know she can always reach for the stars and achieve what she sets her mind to. I want her to possess a carefree spirit and never worry about what someone else thinks. Until now, she set an example for me. It was time for me to set an example for her. How could I teach her if I didn't practice what I preach?

I set out on a journey outside my comfort zone. I have always been passionate about health and fitness. I picked up the latest issue of Oxygen and Muscle and Fitness Hers every month and admired the women on the cover. I always had the desire to compete, but never had it in me. I was on the outskirts of a milestone birthday (age 40) and while others complained about their aging bodies, I decided to get fit at age 40 and embrace it.

A few months ago, I decided to explore a fitness network marketing opportunity. It didn't work out, but I'm grateful because it jumpstarted me on this path. In addition to the business aspect of network marketing, there's a huge push on personal development. I was encouraged by books like, "The Slight Edge" by Jeff Olson and "The Compound Effect" by Darren Hardy. I experienced a newfound confidence.

Along the way, I was reunited with an old friend from high school who was also involved in the business opportunity. She recommended another personal development book, "Motiv8nU" by Staci Boyer. In addition to writing her book, Staci is the cofounder and coach with Sandy Wiedmeyer at Iron Diva Fitness and Team FAB, a figure and fitness competition team. My friend from high school was part of the team and competed in her first shows in 2012. 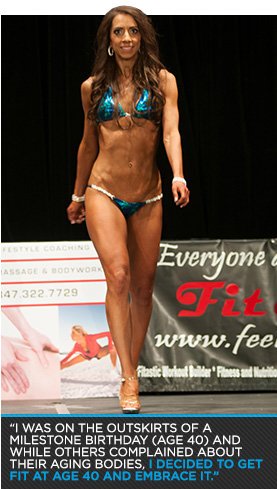 I was inspired and decided to give it a shot. I contacted Staci, decided to join the team, and set a date for my first competition. First, I sent Staci before photos so we could track my progress. I reviewed the pictures and was a little dismayed—I didn't look like an avid exerciser. Doubt and fear clouded my mind, but there was no turning back. I cut my face out of the pictures and sent my before photos.

During the course of the next 16 weeks, I worked on the plan provided to me, prepared meals on Sundays, and took progress pictures on Mondays. I trained six days per week with heavy resistance training. Fridays were rest days that consisted of family time.

I was discouraged during the first few weeks, but then I started to see changes in the photos. The transformation was physical and internal. I quit cutting my face out of the pictures and started smiling.

I can't say enough about Team FAB. The sense of camaraderie and the motivation and support was unbelievable. They believed in me even when I didn't believe in myself. I'm a better person because of them.

The 16 weeks flew by, the show day arrived, and I nearly lost my footing after a stumble during pre-judging. I felt discouraged, defeated, and was ready to throw in the towel, but a teammate gave me a pep talk and I came back strong for the night show.

The day went by fast. It was a whirlwind experience. I competed in Jr. Masters and took second place. The next morning, my husband brought the trophy upstairs to show my daughter, who could hardly contain herself. Her eyes were wide open in amazement and she let out a shriek of excitement. That moment made everything worth it.

Juggling everything was a challenge. I'm a wife, a mom to a five-year-old, a health and fitness blogger, and work a full-time job. Prioritization and scheduling was crucial to fit everything in. The hardest part was sticking to the nutrition plan.

I love to cook, so meal planning and prep wasn't a problem. However, sometimes I had to make three different meals for my husband and daughter. That's why meal prep is so important.

I plan to continue working with Staci to build up any lagging parts over the next few months. I hope to get back on the stage in early November. In the meantime, I would also like to renew my ACE Personal Trainer Certification. In addition, I plan to continue blogging and document my next journey to the stage.

As a fellow teammate said to me about my internal transformation, "It's a beautiful moment when someone spreads their wings and flies... And you soared!!" I hope to inspire others who are afraid to venture out of their comfort zone. I would suggest not going at it alone. Find a support system on message boards, Bodybuilding.com, or a team to help you. A support system goes a long way to help you achieve goals.

Bodybuilding.com was a huge contributor to my success. I love reading the transformation stories for inspiration and motivation, especially that of teammate Christina Clausen who lost more than 100 pounds and built a successful competitive career.

I also referred to Jamie Eason's LiveFit recipes often for great tasting healthy meal options. The turkey burgers and meatloaf muffins were a mainstay in my nutrition plan. When it came time for a treat meal, the cinnamon swirl bread and peanut butter crisps were an amazing and delicious guilt-free option.