The Bodybuilding.com Exercise Database is home to hundreds of great movements. Check out the 10 highest-rated triceps exercises, as chosen by our users!

Triceps might be considered the envious lover of their counterpart, the biceps. Despite making up about 2/3 of the upper arm, they get little attention. Very developed triceps are a sign of a devoted trainee. Every 12-year-old boy has worked his guns, but how many people have you seen with triceps bulging out of their sleeves?

Your triceps, comprised of three muscular heads, are responsible for extending the elbow. The multiple heads provide leverage in the variety of positions the upper arm can take relative to the shoulder. Two of your triceps heads—the medial and lateral heads—cross only the elbow joint, while the long head crosses both the elbow and the shoulder. Keep that in mind when reviewing these exercises, as bodybuilders have developed specific movements to emphasize all aspects of the posterior arm.

To see the full array of triceps exercises, check out the Bodybuilding.com Exercise Database, which hosts video demonstrations of hundreds of exercises with top models from the industry. Below are the 10 best triceps exercises as rated by you—our users!

Topping our list is this variation of the common skullcrusher. There is only a minor difference between the decline version of this movement and the same thing performed flat: The decline version will provide a little more tension through the range of motion than you'll get on a flat bench.

Differences in this movement really come into play when you change the angle of the shoulder, which changes the point where you lower the bar. Instead of lowering the bar to your face, lower it just behind your head. The long head of the triceps is biarticulate, and this increased flexion of the shoulder will change the tension in the triceps for increased effect. 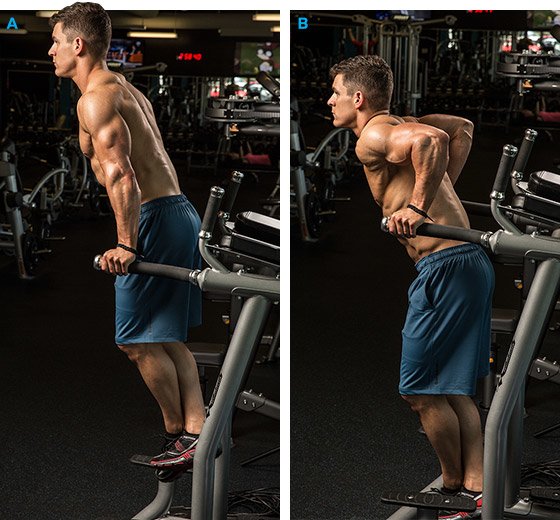 You wouldn't think so, but the position of your head is important in this exercise. Keep your head high and look up; this helps to keep your torso straight, which emphasizes the triceps. If you feel a tingling in your hands when you do dips, tuck your chin instead.

This exercise is often considered the "king" of triceps movements. When done right, it places a heavy emphasis on the long head of the triceps that most other exercises aren't capable of. A narrower grip and greater elbow displacement places greater emphasis on your triceps, but don't work to the point of joint discomfort. Bands make a good addition to the bar here, though I prefer the Tate press or JM press over this particular movement. 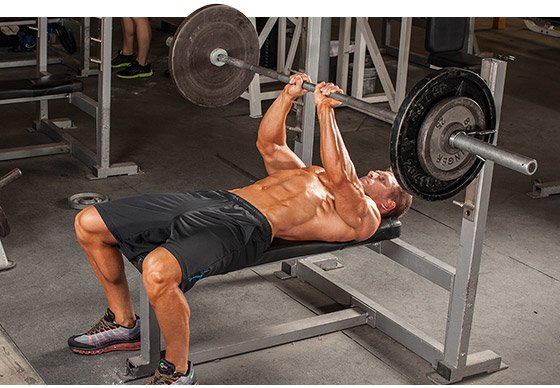 "When done right, the close-grip barbell bench press places a heavy emphasis on the long head of the triceps that most other exercises aren't capable of."
4

Pop quiz: What is the point of origin for the long head of the triceps? If you said the infraglenoid tubercle of the scapula, you're right! The other two heads—lateral and medial—originate on the arm itself, but that weird long head actually crosses two joints—the elbow and shoulder.

While the other two triceps heads are heavily affected by shoulder adduction/abduction, the long head is affected by the degree of shoulder flexion/extension. When you get your arms overhead, you really hit the long head of the triceps.

There are several variations of this exercise, and they are all effective. When standing, take care not to cheat. I still prefer standing to sitting because standing demands more from your core. 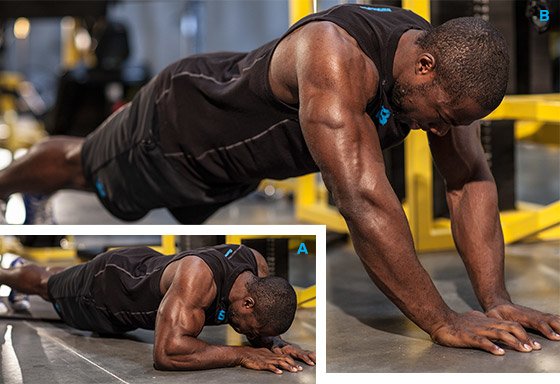 This is essentially a closed-chain version of the close-grip press. What I like about it is that it is hard to mess up. However, it is a difficult movement and can be a little rough on the elbows, so play with arm placement. Generally, get the elbows directly below the shoulder. You will get the added benefits of core work with this movement. To make it easier, put your hands on an incline. To make it more difficult, put your feet on an incline or a bench.

This may surprise some of you, but wrist position only plays a small role in triceps recruitment. This is in contrast to the clear effect that wrist supination—turning your hands up, like you're holding a cup of soup—plays in biceps recruitment. Relative arm and shoulder position will affect the triceps, but changes in the wrist really only affect your comfort level and the muscles in your hands and forearms.

For pushdown movements, use whichever wrist position you find most comfortable, such as the reverse grip. There will not be a significant change in triceps involvement unless you change the angle of the arm or shoulder. Pushdown movements with the shoulder fully extended and arms pinned to your sides will minimize the long head's recruitment. This puts the medial and lateral heads in a position to bear greater proportions of the load. 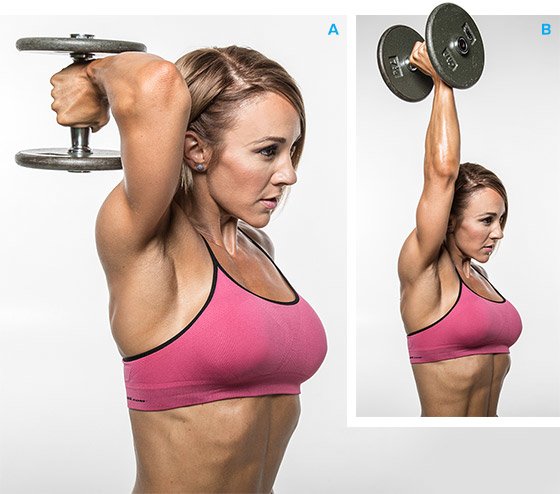 You will get better range of motion doing this exercise with one arm instead of two. This exercise provides a good stretch to the long head of the triceps. Due to different structures and flexibility, some people may have trouble being comfortable in this position. Experiment with different grips and implements until you find what works for you.

The bench dip is a great variation of the standard form that puts a heavy emphasis on the triceps. You can begin with your feet on the floor until you abilities increase. At that point, elevate your feet on another bench. After you can perform well there, it is standard to place weight plates or dumbbells on your thighs, typically with the assistance of a partner.

This is essentially a modified form of the standard skullcrusher. By keeping your upper arms perpendicular to the floor, your elbows assume an intermediate position. This makes the recruitment of all three heads of the triceps fairly balanced. Aim to take a narrower grip and flare your elbows out—so long as it doesn't hurt—when you perform this exercise. Changes in relative arm position will affect the triceps differently.

Kickbacks are easier on the elbows than most triceps exercises. The position of the shoulder joint means the long head is not emphasized, placing more load on the medial and lateral heads of the triceps. When doing a kickback, keep your arms glued to your sides. I prefer cables over dumbbells here, as they provide continuous tension. 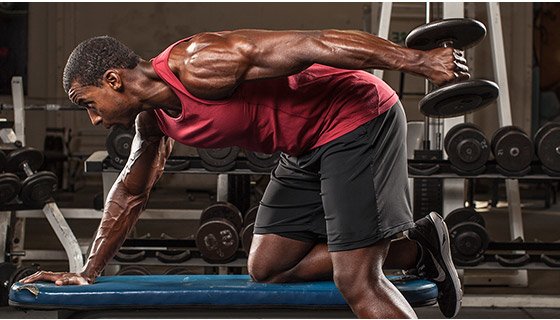 "The position of the shoulder joint means the long head is not emphasized, placing more load on the medial and lateral heads of the triceps."

"Tri" Them on for Size

Now that you have additional triceps exercises in your arsenal, start incorporating these moves into your own workout regimen! When adding a new exercise or replacing an old one, be sure to think about which heads of the triceps you want to emphasize. For balanced development, try to include at least one exercise that gets your arms overhead, to target the triceps long head.

Find the best moves to make your guns go 'pop,' as chosen by you in our exercise database!

Get arms that have size, shape, and definition without having to spend more time in the gym than you need. Sow 30 minutes of work, and reap the reward of bigger, better arms!

The Golden Age of Bodybuilding began when Larry Scott stepped on stage at the first Olympia. Are you up to the challenge of the classic workout that got him there?