Balls Of Steel: What Does It Mean To Have Steel Balls?

Long before the warm and fuzzy spas known today as 'gyms' took over, I trained for powerlifting in an insane asylum known as Eiferman's Gym. Learn what real training is, without the pretty spandex and music!

Long before the warm and fuzzy spas known today as "gyms' took over, I trained for powerlifting in an insane asylum known as Eiferman's Gym. Yeah, it was a hellhole. A f*cking dungeon. These were just a few of the names affectionately given to this wonderful sh!thole of a place by its members. It was owned by former Mr. America, George Eiferman, God rest his soul, and we all loved it.

We were there to lift. No one there talked shit. One of the great things about Eiferman's was that no matter how big or strong you got, there was always someone bigger or stronger. It was a great inspiration, and we were all a close-knit bunch. Unfortunately, about half way through my lifting career, Eiferman's closed. I found myself searching for another torture chamber to replace it. Good luck, I thought to myself.

By now, the spas had already begun to take over the gym scene. I knew to stay away from the nationally owned chains (I am NOT into any type of dancing when I lift), so I found this locally owned gym chain and thought I'd take a shot. I swear on my grandmother's grave this is how the conversation went on the phone:

Gym Rep:
"I'm glad to hear that you're interested in joining our gym."

Me:
"Well, I'm just trying to get some rates. My last gym closed, and I'm looking for someplace to transfer my training to."

Gym Rep:
[Long silence] "Umm." [Another pause] "I don't think our dumbbells go up high enough for you…"

I did end up joining that gym. It was the least offensive out of all of the rest. I learned to avoid the brightly colored spandex-wearing spa-dwellers with the 14-inch thighs by going there around midnight, and I ended up finding some other serious athletes who trained about the same time of day. But it was never like Eiferman's. I never found a place that had that mental attitude again.

And that's my point: We all talk about brutal physical power and beast-like strength, but a lot of times we forget about what it means to have a pair of steel balls. At Eiferman's, we would grunt, groan and vomit uncontrollably, like our lives depended on it. With hundreds of pounds on our backs, often, they did. I know my partner wouldn't help. He would just say that you were a pussy and that his grandmother could lift more than you.

The whole lifting game is about having steel balls. And steel balls are 100% mental. When you get up to the rack and you stare at those weights, it's your mind that will hold you back. I'm sure you've heard the stories about the lady who was in a rollover accident, how her baby was trapped inside. With surprising strength, this 110-pound woman managed to shift the one ton vehicle and save her child.

We all know that lifting that car should have been impossible. But when your baby's life was at stake, she didn't consider what was impossible. Only what was possible. Her mind was in charge, and she knew that she had to rescue her child. You have to be in the same state of mind when lifting if you really want to go any where with your training. A half-assed mental state will get you nowhere. But the correct mental state? That can really get you jacked.

One of the biggest mental failures that many lifters make in the iron game is not setting goals. Now I'm not talking about going into the gym and telling your skinny-ass personal trainer that you want to "tone-up" or "put on weight." What you need to do is to set actual goals. This is what I mean: "I want to add 100 pounds to my squat in six months," or "I need to drop to 10% body fat in 6 weeks."

Once you've set a realistic goal, you must become obsessed with that objective and dwell on it constantly. Burn it into your brain. Arnold used to say that when he trained biceps, he would imagine them filling the room as he did curls. Look at his peaks. Do you think it worked? What I say is, what the mind can conceive, the body can achieve. But only with realistic goals and drive. After you set your goal, break it down into smaller, achievable goals. By doing this, you will see your progress. See progress will, in turn, push you to try harder.

Take the above squat example. 100 pounds in 6 months may seem like quite a big order, but let's break it down. Let's say you're doing a single rep of 315. So, with the proper regimen, in one month you can easily make a 335. Not bad. And with that success, you've primed and stoked yourself to hit 350 or 360 by next month. And on and on, until you hit 415, or maybe more. Small accomplishments fuel larger ones. But beware: At the same time, the opposite can be true. The same mental ability that we all have to empower us further can also be the force that limits us.

I remember this one time when I was doing some clean and jerks at the gym, and I noticed this guy at the rack next to me. He was pretty small framed, but he was really putting up some decent poundages, and without much of a struggle. After he racked the weight, I told him that his lifts were looking good. I asked him if he had considered doing any competitions. He said he had thought about some local events, but then realized that he never could.

I asked if he had some sort of medical condition that would prevent him. He said no, and went on to say that he would never be able to compete against "those types of guys," meaning any strength athlete. All I could do was shake my head. Here we had a guy who could probably have taken his weight class in a number of competitions, if only he trained for it. Yet I knew he would never amount to anything because his mind would not allow him to.

We've all been in that boat one way or another. We've all been in that situation or condition where we want to go further, but fear we may fail, or think that we're not good enough. The key word here is "think". "Damn," we say to ourselves. "What would it be like to enter that squat competition?" But instead of going forward, we tell ourselves, "I could never do that." How the hell do you know? Have you tried it or are you letting fear and your small mind control your life? What's the worst that could happen? You could lose the competition, so what. They'll always be more competitions. Don't allow yourself to think small.

I remember an event that just happened this past summer. For the last sixteen years, I have volunteered for a summer youth camp up in the mountains near Las Vegas. But 2002 was going to be a special one. I was on my way to the airport to pick up the world's strongest man. Yup, Anthony Clark. I had met Anthony two years prior at the Olympia show in Vegas. I had heard and read a lot about his talks to teens about life, and we were able to get him to come up to our camp for a few days to do the same. Now, we all have heard about the world records that he has set, but not many know what he went through to get there. What was so different about Anthony Clark is that he had no fear. He didn't just defeat adversity, he kicked its ass.

Anthony came from an abusive family. But he realized that he had to take the bull by the horns if he wanted to make something of himself. So he began weight training, and at one point told his friends that someday, he would become the world's strongest man. They all laughed at him. But he didn't let them or his own fears take control of his decisions. Look who's laughing now. In 1995, he set a record with a 1031-pound squat, set a world record total overall of 2531 pounds, and held the bench record at 800 pounds until Ryan Kennelly broke it. As Anthony told me, "We're not born winners or losers; we're born choosers." 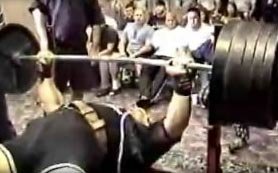 Thanks,Listen, if nothing else, remember this: You will always be presented with choices in your life. Are you going to spend your time on this planet living a life of "What if..." scenarios? Or are you going to go out there, take a deep breath, and take a risk? At worse, you'll fail and learn from your mistakes. But at best, you'll achieve more than you could have ever possibly imagined. Don't be part of that group that will never know the sweet taste of victory. It all begins with the right mental attitude. Rock 'n roll brothers. Show the weights no mercy.