Scotland has a monster living among in population in Andrew. See his list of amateur accomplishments and how he plans to infiltrate the pro ranks!

Q
How did your bodybuilding journey begin?

I fell into bodybuilding when I went to college to study health and fitness. I had aspirations to become a personal trainer and had always been a fitness fanatic. Action movie heroes like Arnold and Stallone and the physiques of pro wrestlers inspired me.

I loved playing sports, but was better at training, so it made sense to coach and help people get in shape. Initially, I hit the weight room to add extra beef to help for soccer and lifting became my primary concern. After a couple years of lifting, I added size and bodybuilders suggested I do a show. They prepped me, and helped me diet, pose and train. I stepped on stage at the Scottish Championships in 2006 and went all in.

I've been competing for seven years on and off. I used to check Bodybuilding.com regularly for posing tips and photos of the pros. Despite a shoddy diet and questionable presentation, I managed to win the BNBF Scottish Junior title on my first attempt, which qualified me for the British Championships a few months later. I was fortunate that Douglas Black, my sponsor and owner of Extreme Nutrition, took me under his wing, showed me the ropes, and prepped me for championship.

I placed second in the junior class finals and became determined to win the British title the following year and become the best the BNBF ever saw. Since then, I competed in multiple British finals and world championships. My latest triumph came when I won the British middleweight title in 2012 and finished second in the heavyweight class at the DFAC World Championships. Sadly, a pro card offer has eluded me, but it won't be long before I stand among the professional ranks.

I was bit by the bug when I started to make gains and saw my body change. So in my pursuit of knowledge, I read lots of magazines, Internet articles, and books. I admired the physiques and tried to emulate them. The guys in magazines were champions, and that appealed to my competitive nature.

When I first started training, I wanted to gain muscle for sports and to help pick up women. When I decided to enter my first contest, the prospect of being the Scottish bodybuilding champion was my main motivation. Proving I had the best physique in Scotland for my age was a major goal. Being the best at what I do is still my primary motivation. My training partners and friends are supportive. They pushed me to reach my goals. 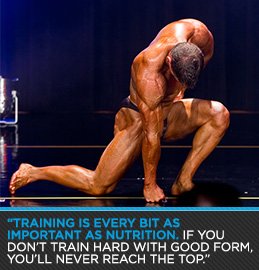 I go to websites like Bodybuilding.com to look at pictures of top pros, read magazines, watch training videos, and talk to friends. I'm always impressed by feats of strength, especially from people who I can relate to.

At the moment, I would say my plans are to establish myself as a top amateur in the UK. I'd love to win the British overall title and get my pro card. I'm really into powerlifting and strongman contests and had some success this year.

People like to say that bodybuilding is 90 percent diet. I disagree. No component is more important than the sum of the parts. Training is every bit as important as nutrition. If you don't train hard with good form, you'll never reach the top. If you don't have a good diet to take advantage of your training, you'll struggle to make gains.

I like classic physiques like Frank Zane, Bob Paris, and [Francis] Benfatto. I can relate to these guys because they weren't mass monsters. I also like Dorian and Ronnie for how they changed the sport. I'm a big fan of DFAC pros Dave Kaye, Mark Claxton, Vicky McCann, and Raymond James. They have great physiques and are real nice people.

Bodybuilding.com is a useful resource for training videos and articles. I use it regularly when training clients to keep my routines fresh and interesting. I also use it for contest coverage.