Amateur Bodybuilder Of The Week: Kyle Got Shredded With Science!

Kyle's body is proof that science sits at the forefront of bodybuilding. See how this student of the sport gets shredded to the core and brings home competition hardware!

How did your
Journey Begin?

I stood 5-foot-3 and weighed 106 pounds as a high school freshman. My main hobby was skateboarding and I was sponsored by a local skate shop. Most of my friends were football players and track athletes. Toward the end of my freshman year, my friends started going to Gold's Gym. I felt left out, so I started going with them. They were much stronger and more knowledgeable than me. I had no idea what I was doing but loved everything about the gym.

I was insecure about height and determined to increase my muscle mass. After three years of lifting, I gained 35 pounds and matured to 5-foot-7. I started lifting with Bob, a respected older guy at my gym. Every day after school, I went to Gold's and lifted with Bob, who taught me the ins and outs of weightlifting. During this time, my physique went from average to muscular and defined. At that point, the idea of bodybuilding competitions emerged. 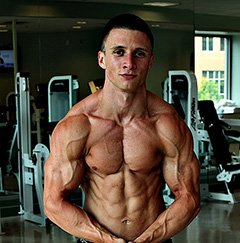 In January of my senior year, I officially entered my first show at the OCB Eastern Regional in Baltimore, Maryland. I entered the men's physique class because I thought it would be a better fit for my age. Deep down, though, I wanted to be a bodybuilder. A week before the show, I asked the promoter to put me in the men's junior class and I placed second. From that point on, I knew this was what I wanted to do with my life. 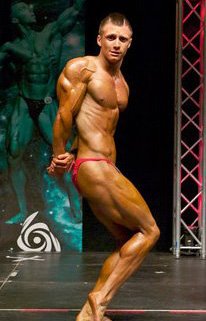 I was never much of a team player. I hated that you could put everything into something and lose because someone else failed to meet their end of the deal. That's why bodybuilding really grasped my attention and sparked my passion. Ultimately, I love having a goal to work toward.

Who/what motivated you to become a bodybuilder?

There were two guys who really stood out at my gym and I admired. A couple months before I decided to compete for the first time, I went to a show and watched them compete. Seeing them up there opened my eyes up to the fact that I could compete too. From that point, I knew I wanted to compete.

I'm currently an exercise physiology major at West Virginia University, which gives me a stronger scientific approach. When I feel unmotivated, I go to scholarly research for information. I sit down and think about which aspects in my training, diet, and physique could use work. Then I research scholarly reviews and studies which answer my questions. Small purchases like new workout shoes, clothes, or supplements also motivate me. 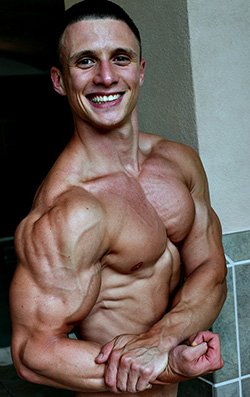 "If you want to create an inspirational physique, drop the ego and focus on making every
rep count."

I cannot stress mind-muscle connection enough. If you want to create an inspirational physique, drop the ego and focus on making every rep count. When you advance this technique, you'll be able to mentally isolate particular muscle bodies while performing compound lifts. This allows you to perfect imbalances and lift less weight with the same intensity.

Constantly research scholarly articles, find commonalities among data, and implement them into your training. Knowledge and innovation are the differences between a bodybuilder and a champion.