Active From The Ground Up: The All-Purpose Barefoot Warm-up

You don't have to throw away your shoes to see the benefits of barefoot training. Just try this warm-up before you hit the field or the gym for better balance and muscular control!

You were born without shoes, and you almost surely took your first steps without them. Back then, the soles of your feet were like eyes, taking in the details of every surface in a never-ending quest for balance and stability. This is how you learned to move.

But then, at some point, shoes became the lens through which your feet viewed the world. If you're like me and most people, you have a closet (and maybe other storage spaces as well) packed with shoes that you view as tools. There are pairs for hiking, running, and perhaps "trail running" in between; winter shoes and boots for inclement weather; formal shoes for work; cleats for soccer, spikes for golf, and perhaps sandals for everything else.

It's easy to believe, after a while, that if you want to improve at a certain activity, you need to become even more specialized: fancier running shoes with customized anatomical support, basketball shoes, or weightlifting shoes. But according to New York City-based podiatrist Dr. Emily Splichal, we would be better served by taking that shopping time and using it simply to reconnect our feet with the ground.

There are dozens of new models of "minimalist" shoes that claim to do just that, but Dr. Splichal is talking about something simpler: bare skin pressed against the floor or ground, and you struggling to balance your weight above it. All types of athletes can benefit from it.

Active from the Ground Up

"The way that we are designed to walk starts with barefoot stimulation," Splichal says. "The only contact point between your body and the ground is the foot, or more specifically, the bottom of the foot. So something happens when we move 'closed chain'—when we stimulate the skin on the bottom of the foot. You're setting the motor patterns of how we were designed to move." 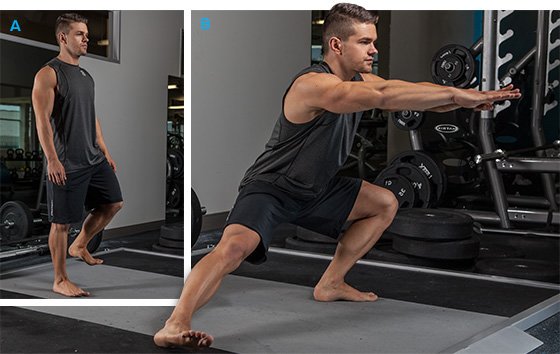 That may sound like it's speaking to the niche barefoot running crowd, but on the contrary Splichal says she works with trainers and coaches, powerlifters, and a wide range of competitive athletes. Strength athletes can benefit from the increased ankle strength and leg muscle activation that comes with barefoot training, but so can athletes who have to wear precise footwear in their sport of choice.

"Basketball and soccer players, for instance, have a specific shoe when they are in the game or competing, but they still would benefit from foot-specific programming," she says. "It's part of their dynamic warm-up, setting the reflex muscle activation patterns so that when they are on the field or court in their shoes, everything is a bit more tuned in. The more efficient you make those neuromuscular pathways the more you can offset fatigue. So there's both a decreased risk of injury and a performance benefit."

Splichal's routine of choice involves a combination of lunges, squats, and tri-planar movements, all performed on a single leg. The routine is not weighted, but don't expect it to be easy. On the contrary, you might feel like a tottering infant all over again. But you better believe you'll feel warm.

"After this warm-up, the client or athlete should feel their core and glutes are more 'awake,' and that their reflexes, reaction time, and strength are improved," Splichal says. "This warm-up is done barefoot and on one leg. The movements each start and end with a "short foot" contraction, or engaging the intrinsic foot muscles by pressing down with the big toe." 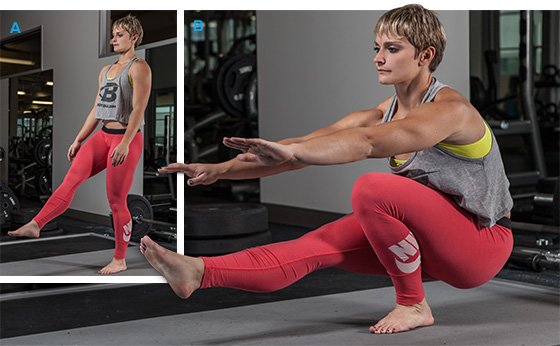 Some of the movements, such as single-leg or "pistol" squats, may require time and practice to build up to. But Splichal says that even just the partial program can help an athlete get the most out of their training. "It doesn't have to be the whole program," she says. "It'll still empower them a little bit and prepare them for the rest of their session. Get those muscle patterns firing, and then put your shoes on and go do your stair-steppers, kettlebells, or whatever else you do."

Perform 5-8 Repetitions per Leg. Start each rep with a "short-foot" contraction.