7 Ways To Get A Great Workout In A Packed Gym

Learning to make do amid the January crowd is a fitness rite of passage! Now's the time for you to figure it out. Here's how three top fitness competitors make it work!

It's any fitness enthusiast's worst nightmare: jam-packed gyms with no equipment available. But this time of year, it's a reality. With the influx of New Year's resolution gym-goers, it can be hard to knock out your normal workout to the letter, especially if it calls for circuits or giant sets.

But this doesn't mean all hope is lost! Fitness pros and Cellucor athletes Jen Jewell, Calum von Moger, and Karina Baymiller have decades of training experience between them, and plenty of it has been spent in gyms where free equipment is hard to come by.

Their message to you: There is a way! Here are their personal suggestions for keeping up top-level training while battling a crowd. 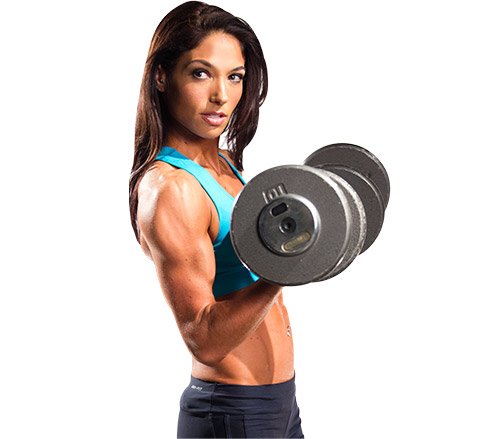 Let's say you have five movements in your workout today. Instead of strategizing how you can hit them all, ask yourself which one or two are the most important. You may not want to think that way, but at times, it's necessary.

"I'm a very meticulous and detail-oriented person," says Karina Baymiller of her training plan. "I prefer to always go in with everything all written up from my coach, but that said, I've learned to be flexible at the same time."

If, say, squatting is non-negotiable today, then by all means do what you need to do to squat. But be prepared to substitute for other movements and weights as necessary.

For instance, if the set of 25s you normally use for dumbbell curls are in use, consider going up to the 30s for fewer reps, or going down to the 20s for more reps. "Be inventive, creative, and patient. Almost everything has an alternative!"

Get in the Zone

Calum von Moger knows all about busy gyms. After all, if you watched him in Building Von Moger, you know he trains at Gold's Gym in Venice, one of the most sought-after gyms in the world! So how does he navigate that madhouse? He simply goes in with the right expectations, takes his time, and zones out. 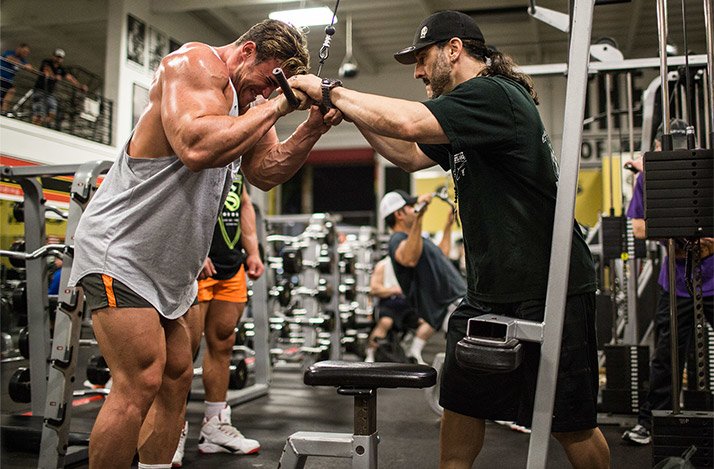 If having so many people around you is keeping you from training at a high level, consider this an opportunity to practice your focus.

"Just put on the headphones and do the best version of your planned workout that you can," he says. "You can't always escape the crowds, but it's no excuse to skip out on your workouts completely."

If having so many people around you is keeping you from training at a high level, consider this an opportunity to practice your focus. In the long term, von Moger says you'll only become mentally stronger because of it. "Turn up your music, get in the zone, and you can get a great session even if you have to freestyle some of it," he says.

It may seem like there's never a break in the January madness, but in most gyms, certain days are busier than others. Once you know the pattern, Jen Jewell recommends using it to your advantage.

"Try a class on the days where the weight room is going to be a lot busier than normal, such as on Monday and Tuesday," she recommends. "This can help you fit in fitness despite the crowds." 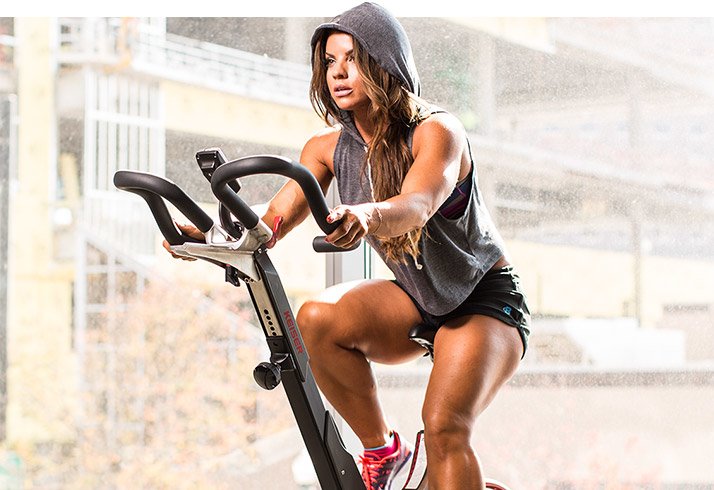 If you've been thinking about getting more regular with, say, spinning or hot yoga, this could be just the opportunity you've been waiting for.

If you've been thinking about getting more regular with, say, spinning or hot yoga, this could be just the opportunity you've been waiting for. "With everyone else making resolutions about their fitness, why don't you?" Jewell asks.

Carry out your normal strength-training plan later in the week, when there's less of a fight for equipment.

It can be easy to view gym newcomers purely as competition in January, but Baymiller says she uses this time as an opportunity to tap into her higher self. "If you see someone struggling or performing an exercise improperly, help them out instead of grumbling around the gym for the entire month," she says. "The January rush is what you make of it."

Sure, working out in a packed gym can be a challenge, but it's also an opportunity to help someone learn, stick with fitness, and make a lasting change. A few kind words can go a long way. Make a difference to one person today, and it may even pay off when you need a spot months down the road.

Go Where the People Aren't

If the weight room is packed, but your gym also has a studio area that isn't being utilized for a group fitness class, take it over for a circuit-style workout. Bring a fixed-weight barbell into the studio, and you'll be able to do all the moves you need to in order to get in a full-body workout session.

You could also use this as an opportunity to focus on the machines that most people avoid because of how tough they are, such as rowers or stepmills. Jewell has a love-hate relationship with these machines and gave multiple options of how to use them in her recent article, "4 Cures for the Cardio Blues." 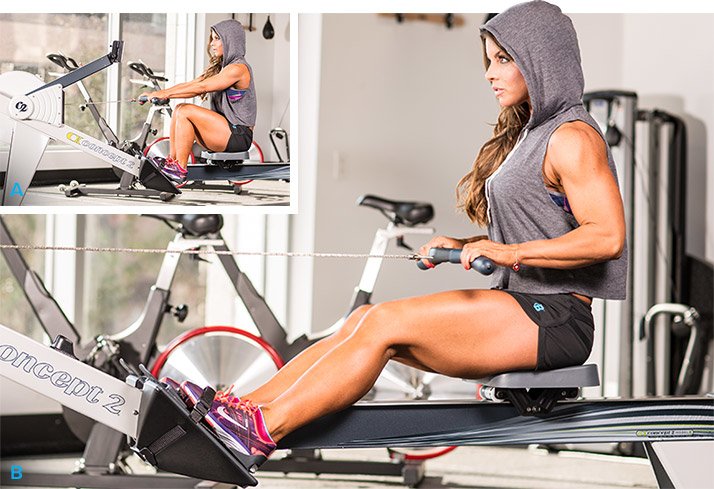 You could use this as an opportunity to focus on the machines that most people avoid because of how tough they are, such as rowers or stepmills.

Best of all, as few people will be in the studio, you won't have to worry about the distraction of others around you or fighting for gym equipment.

It's no mystery what time of day the gym is busiest: after work! If that time is stymying you, consider altering your daily routine. The front-desk staff at most gyms has a rough idea of the peak and low hours on the weight-room floor, so put their knowledge to good use and train when the gym is particularly low on members.

"If you can be flexible, change the time you go to the gym," says Jewell. "I often hear that people have been meaning to start working out first thing in the morning or on their lunch break, so why not get into that habit now?"

The best part: Not only will this help you avoid the after-work crowds, it can free up your evening!

Pro bodybuilders like von Moger are huge fans of supersets as a way to maximize intensity and do more work in less time. "It's sometimes tough to get machines, and you're forced to wait, so it messes up your whole plan," he explains. "Don't let it. Be flexible, use your body, and tailor your workouts to the crowd." 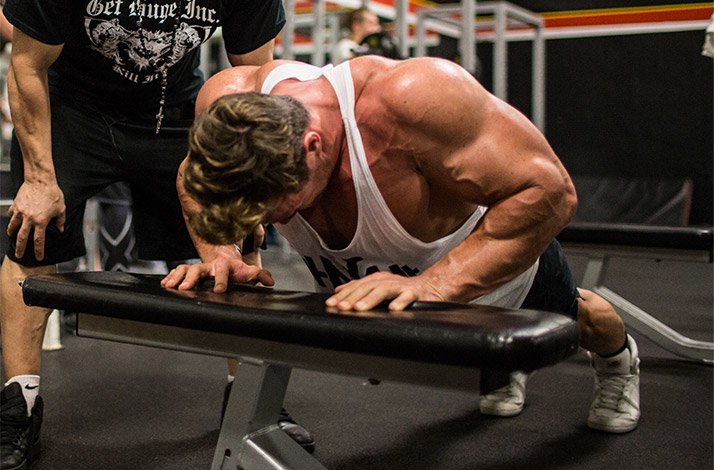 Pro bodybuilders like von Moger are huge fans of supersets as a way to maximize intensity and do more work in less time.

One of the ways he does this is by performing bodyweight movements while he waits for a machine or piece of equipment. Here are a few you can work into a variety of settings:

Do these for high reps while you're waiting or "working in" on a piece of machinery, and you'll boost the intensity of your overall session, keep your head cool during the workout, and hardly notice the difference at the end.

Sooner or later, things will get back to normal. Until then, look for ways to use this situation to your advantage!