There’s a lot more to love than you think! Indulge in a superb V-Day weekend without busting your health and fitness goals.

Valentine's Day - love it or hate it, it's difficult to escape. So is the irony that this holiday, one symbolized by the human heart, is often filled with treats and customs designed pack on the pounds, skyrocket your blood sugar, and clog up your arteries.

To be sure, some Valentine's Day traditions can bust your diet and set back your progress. Like sitting in a fondue restaurant feeding "Pookie" chunks of bread dripping with cheese or marshmallows coated in coconut coated in white chocolate, or popping enough candy hearts that the last one should be stamped "Toxic Shock."

However, the following 5 indulgences are not only sexy and fun, but healthy too.

The mathematician who figured out the square root of attracting a woman is 1/4 the summation of chocolate squared clearly knew what he was doing … and was rumored to be a close relative to St. Valentine himself.

Moreover, the above mathematician's friend, the gal who came up with the simple equation chocolate + wine = delicious-in-a-sexy-way is probably the reason for all the November births in the United States.

When it comes to chocolate, darker is better. That is because really dark chocolate, 80-90% cocoa, has less sugar and fat and more protein than lighter shades of the sweet stuff. That's not all! A 2008 study found that moderate consumption of dark chocolate may exert protective effects against the development of cardiovascular disease.

The same study found that dark chocolate consumption might have positive effects on metabolism, blood pressure, endothelial function and inflammation - all of which would help keep your ticker ticking.

Remember, cocoa, not chocolate, has flavonols, natural antioxidant compounds. So, the more diluted the cocoa becomes with sugar, milk, caramel and the like, the less cocoa your chocolate contains. Milk may also interfere with antioxidant absorption; so, milk chocolate doesn't have nearly the health benefits of dark chocolate.

How about these appl - er, grapes! 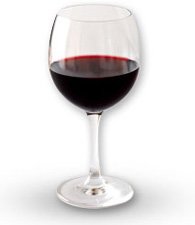 A glass of Cabernet contains:

Wine contains have alcohol, and a fair amount of calories, but it also carries a list of accolades. It's considered heart-healthy because, like chocolate, it contains antioxidants. The antioxidant resveratrol, found in grapes, is purported to be an anti-aging elixir that may help reduce blood clots, bad cholesterol, and formation of malignant tumors.

The compound flavanoid helps prevent bacteria from sticking to your teeth (although it doesn't seem to prevent red stains). The polyphenols also found in red wine may reduce inflammation associated with gum disease.

Despite the seeming wonders of these foods, make sure you don't drink an entire bottle, or eat four chocolate bars to yourself. Too much of a good thing, you know. Liver damage, high blood pressure, heart failure, and a big gut are just a few of the things you can look forward to if you drink and eat too much.

Arnold talked about the pump mimicking sex, which is great…

Then again, you could just have sex.

Grant Stoddard, author of Great in Bed, says that sex, if performed responsibly, is just about the healthiest activity you can participate in. Sex actually mirrors exercise, in that the body produces endorphins much like those we get from exercise.

Stoddard claims the key to optimizing calorie burn is taking your sweet time. That state of anticipation causes your heart to beat faster, and thus you'll burn more calories. A 30-year-old 200-pound man can burn up to 300 calories in a steamy make-out session if his heart rate climbs to 120 bpm for 30 minutes.

The calories you burn during actual intercourse depend on how (cough) vigorous and (um) enduring your experience is. 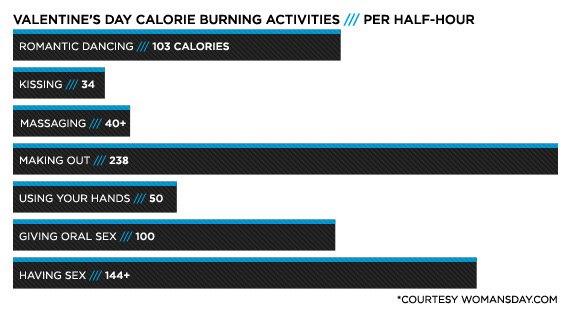 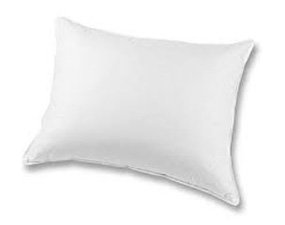 A little cuddle-time on the couch is actually good for building muscles.

It's no secret that in order for your muscles to grow, they need to rest. When you lift hard, your muscles break down, and it takes nothing but rest & nutrition for them to recover and grow. More important, if you allow your muscles to recover, they'll be even stronger the next time you go to the gym. Strong muscles are physically attractive to most people.

So, take the holiday from the gym. Spend the extra time doing something fun with your valentine. Go to a movie, take a nap (who doesn't want one one of those?), or just lounge in your pajamas (or lingerie). 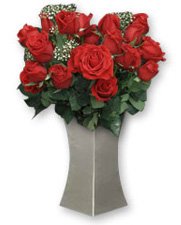 A 2011 survey projected that Americans would spend a total of $3.4 billion on dinner, $3.5 billion on jewelry, $1.1 billion on greeting cards and $1.7 billion on flowers.

While this might just seem like consumerism at its finest, there's actually interesting evidence regarding the health benefits of gift-giving. Whether it be money, candy or blood, giving is proven to make people happier.

As it turns out, there are more psychological benefits for the giver than the receiver. Giving, it seems, is good for you. Giving releases endorphins, which make people feel better physically and emotionally. Gift-giving has also been known to relieve stress and depression. By making someone else happy, you actually give your own health a boost!

So bring on the flowers, chocolates, cards and kisses!