3 Exercises The Form Police Are Wrong About

Have you been performing your pull-ups, rows, or RDLs wrong because someone made you afraid of going to "snap city?" Don't worry. Here's the truth about proper form on these key moves!

The form police wear many uniforms. One of them, as I explained in my article "What You Can Learn From An Old Gym Rat," is the one that comes in either size small or XXL. We all know this guy. He's the keyboard warrior typing "Snap city!" underneath YouTube workout videos—the one who spends so much time trolling other people's techniques that he never has time to actually train. But that's only the most visible officer of the squadron.

The form police can also be a well-established, strong-looking "guru" who is trying to sell you his expertise—or, just as commonly, one of his enthusiastic disciples preaching the gospel. On the other hand, it could also be a well-intentioned trainer who is simply repeating what he's heard other people say in the hopes of keeping beginners from getting injured. You don't have to dig very deep to find one of these!

What do all these characters share? A certain blindness to the fact that the textbook sometimes gets it wrong. What appears right in theory doesn't always play out in practice—especially when it comes to pulling movements, and especially once those pulling movements get heavy and the lifter is advanced.

Here are three movements that you may have been doing right for a long time but believed were wrong. If that's the case, you're welcome!

The form police say: Keep the body straight, engage glutes and abs, and pull the chest all the way to the bar.

Many textbooks and online tutorials teach the pull-up without zeroing in on its back-development qualities. To me, this is a pretty basic misunderstanding of why to do pull-ups in the first place. For most of us, it's because we want to develop and strengthen our back muscles! So why perform a pull-up in a way that doesn't contribute to your back's strength or development?

And yet this is what happens when you follow the most popular pull-up cue, "Keep the body as straight as an arrow." 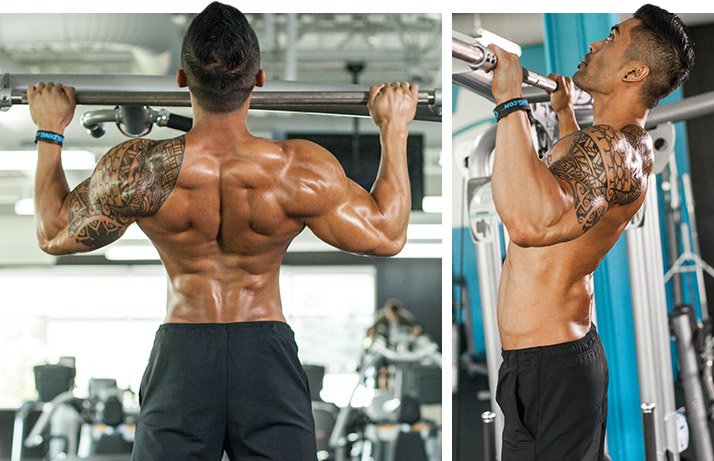 
To engage back tissue in any back exercise, the first step is usually to set the shoulders. This helps keep the arms from being overly involved. Setting the shoulders also raises the ribcage, which extends the thoracic vertebrae. That means the spine will come into a mild arch—period. There's no getting around this.

That also means that the "stay straight as an arrow while engaging the glutes and abs" cue will deactivate plenty of back tissue, since keeping a straight, flat back prevents the scapulae from fully retracting. Don't believe me? Try it!

What happens as a byproduct of applying this poor cue? The shoulders start creeping upward, the upper traps engage, and the lift becomes an arm-dominant pull. If you just want a killer set of biceps, then go to town with this method. But if you're using pull-ups to help your back get strong, you may want to take my advice and create an arch.

For the visual learners, I break it down in this video:

Lee Boyce Should you ARCH during pull-ups?
Watch the video - 3:49

The form police say: Keep that torso rigid, even if it means you have to use light weight.

The form textbook will also mention the bent-over as being an exercise that requires a rigid torso. Any movement at the hips while rowing—what is sometimes known as "top rock"—would constitute cheating and a conclusion that the weight is too heavy.

This couldn't be more wrong! Incorporating some upper-body movement during a row pattern can be an effective way of stimulating more back tissue and safely moving more weight. A mobile torso—as compared to a totally stationary one—will also mean the low back isn't forced to maintain an isometric hold through the entire set. Think about it: Does it really make sense that your lower-back endurance determines how effective your row is? 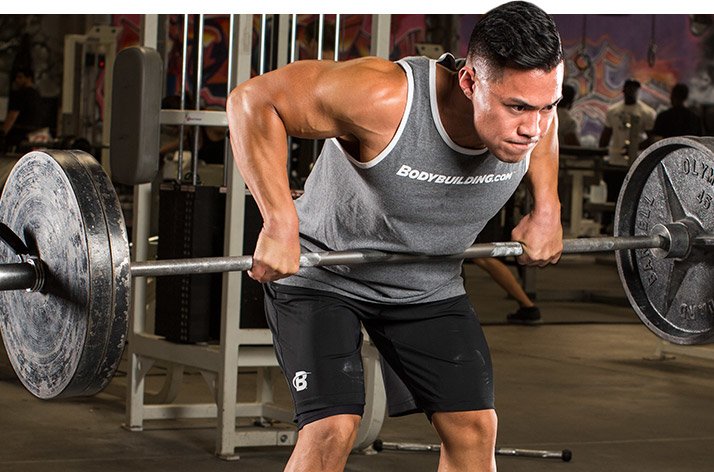 
Now, of course you can go too far with this—and many people do. Overzealous attitudes definitely get in the way of lifting to stimulate the right muscles. Barbell bent-over rows are a staple in many programs, but they're a key exercise to fall prey to the use of momentum, looseness, and the act of just "finishing the lift." There are several bad ways to compromise your form to get the reps up, since it's quite easy to cheat in row variations.

The byproduct of using weight that's just plain too heavy ends up looking like this (jump to 1:00 to skip the foreplay):

Mixing bad body geometry with an aggressive top rock makes heavy pulls like these just plain dangerous. But, I'd be lying if I said body English in some way, shape, or form shouldn't be permissible when rowing heavy weight.

If you're like most people—everybody except the strongest freaks—you'll have trouble pulling a 225-pound or heavier bent-over row with a completely rigid and motionless torso. There's simply a ceiling on just how much your arms can pull. As long as the low back stays in a slight arch—the way it should—incorporating a well-timed, tight top rock to start the lift is both beneficial and necessary.

It definitely takes practice to learn the timing and to understand just the right amount of "top rock" that can be used during reps of heavy weight. But if you're going to row heavy, you'll need to find it sooner or later.

Lee Boyce on the "Toprock" Misconception
Watch the video - 4:05

The form police say: Only go down as far as you can with a perfect arch, even if it's just to your knees.

The Romanian deadlift (RDL) is a movement that has been widely used in place of the stiff-legged deadlift for some time now, and there's a good case for it. The slightly bent-knee position it uses guards against unwanted shear forces on the back, possible knee issues, and unwanted connective tissue stress. 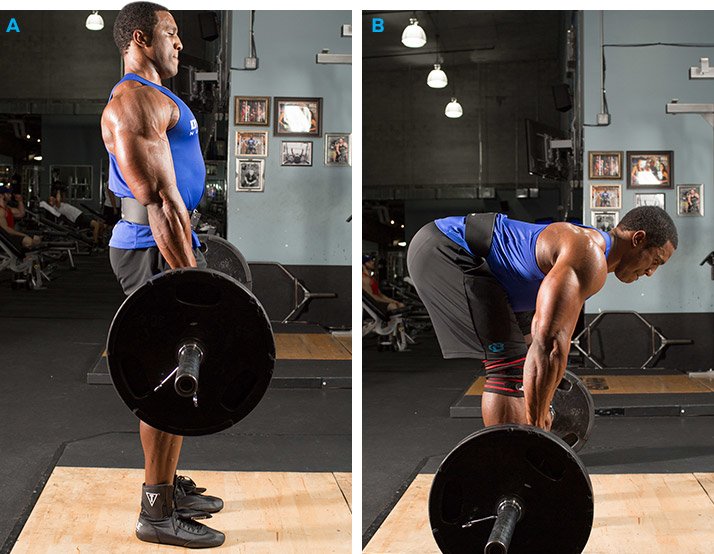 
For some reason, however, the RDL is often cued differently than a conventional deadlift, in that the start position is around knee level, and even sometimes slightly above. The "rule" is that the back mustn't lose its arch during the RDL, especially at the bottom position. And since the knees are held straighter than when doing conventional deads, this means few people perform the move all the way to the floor.

Intermediate and advanced trainees know that this cue may protect the safety of a beginner, but doesn't allow the hamstrings to work within a great range of motion as hip extensors. It also eliminates the possibility of the weight helping to improve their flexibility.

If RDLs were routinely done to a knee-level endpoint, the muscle would just get used to contracting maximally over a pretty small degree of motion. You'd be surprised how much more range of motion you can achieve by taking advantage of a loaded stretch that an RDL can provide, thanks to gravity!

Lee Boyce on the most important ROMANIAN DEADLIFT Fix
Watch the video - 4:51

What I said in my article "Beat Butt Wink: Squat Big Without Hurting your Back" holds true here, as well: While a flexed spine is trouble, a neutral spine is still a position of good strength! Know the difference, and then put it into action.

Start RDLs with a conventional deadlift stance, then fall into a Romanian and embrace that stretch. You'll be sore the next day, but over time, this will do more for your hamstring flexibility than all those passive stretches you hate so much!

To clarify, the form police do have some merit. In many cases, they help propagate cues that keep beginning lifters safe as they find their foothold in strength training. But for people who already know how to move, there needs to be room for customization. Sometimes, we simply have to bend the rules to keep moving forward.

In training circles, the answer to many questions is, "It depends," and for good reason. The key to progress for you depends on your goals, body, and abilities. Don't get caught up only listening to textbooks or people who sound like textbooks. Put your knowledge to use by getting in the gym and practicing! You'll be glad you did.

Lee Boyce is the owner of Boyce Training Systems, and is a fitness author and strength coach based in Toronto, Canada.