Hey Quadzilla, is your lack of hamstring development creeping up on you? Here's what you need to know to save yourself inevitable injury and embarrassment!

It seems we can't get halfway through the season of any major sport without hearing about a big-time player blowing a hamstring. Maybe the image that comes to mind when you think of that injury is a sprinter pulling up lame at the Olympics, but the problem is much bigger than that. For example, the NFL alone averages over 175 hamstrings injures per season. And once injured, a hamstring is very, very easy to reinjure.

Hamstring injuries aren't isolated to team sports. Powerlifting, strongman, and even bodybuilding have their not-so-fair share of hammie pulls—both professionally and among amateurs. With the rising popularity of sprinting for conditioning in the general population, the number of injuries is almost assuredly going up. You may be rubbing your leg in agreement.

To be clear, this article is not going to be about rehabbing hurt hammies; I'll leave that to the PTs and ATCs. But I'll give you a crash course on how hamstrings work, and how the way you're training might be setting you up to injure yours.

Listen up or suffer the consequences!

What your hamstrings really do

The hamstrings are made up of three muscles, all of which cross two joints: the hips and the knees. In conjunction with the glutes, the hams' primary function is to open up the hips—that is, increase the distance between your torso and the front of your legs. The most obvious examples of this are bilateral movements like standing up or performing a broad jump. However, hip extension also includes movements where you swing a single leg back, as in running.

The hamstrings also bend or flex the knees. To imagine this motion, picture yourself doing a hamstring curl. However—and this is crucial to remember—knee flexion is a secondary action to hip extension. 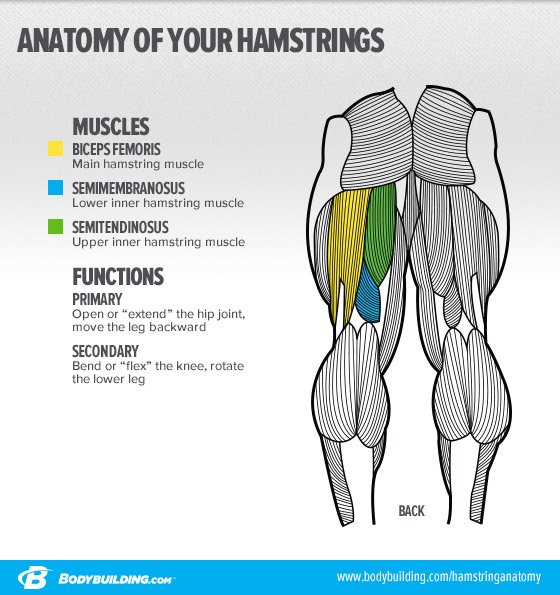 Why is it crucial? Well, let's look at your squat. Most people believe that the primary action during a squat is knee extension via activation of the quads. However, knee extension is actually secondary to what happens at the hips. If you didn't open up the hips, all you'd be doing is a knee movement like kicking a ball or swinging your lower leg. That's not going to move much weight, is it? And if it does, do you really think your knees will like it? I bet not.

The problem is that most people forget about training the hams at all—out of sight, out of mind, so to speak. Or if they do train them, they only train the secondary motion by doing knee flexion exercises like machine hamstring curls, while throwing everything but the kitchen sink at their quads.

This is craziness! Having a huge difference between quad and ham strength will lead to injury. I've had athletes come in to my facility with as great as a 4:1 quad to ham strength ratio, when a 3:2 quad to ham strength ration would be ideal. That is just ludicrous—a snapped hamstring waiting to happen. In addition, when your hamstrings are weak, especially in comparison to your quads, severe knee problems and pain often develop as a result.

Stronger hamstrings will help you perform better, look better, and feel better. You'll squat more and limp less. You need them! So let's get them.

First off, keep in mind that these exercises are separate from you other full-leg movements, such as squats. These are technically accessory movements, but in a more truthful way than, say, those spider curl dropsets you've been doing to, um, "boost your pull-up numbers." Fewer sets of those and a few more sets of these wouldn't hurt.

Where these go in your program is up to you, but find a place for at least the first three.

If you want strong, resilient hams, your first mission (after an awesome dynamic warm-up, of course) is to work the entire range of motion of the hamstring complex—that is, from the top of the butt to below the knee. Romanian deadlifts fill this requirement better than any other exercise.

Some people like to perform a similar movement that they call "stiff-legged deadlifts," but in my experience it's definitely not a good idea to keep your knees locked. Keep soft knees, and you'll find it's the most natural movement for hip extension, as well as a movement you'll duplicate in all types of sports. 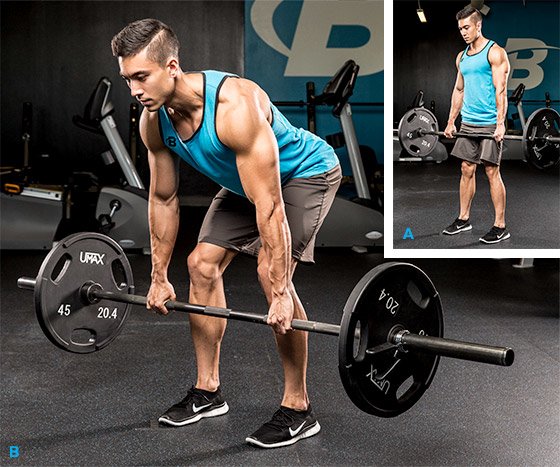 
To start, take a double overhand grip on the bar, at about shoulder-width—wherever your arms are pointing straight down. Slightly bend your knees, and start the downward motion by sticking your butt out—not by bending your knees more. In fact, keep them in the same position throughout the movement. If you continuously bend and straighten your knees, you'll be doing a partial regular deadlift—not the goal here.

Keeping your arms straight and shoulders back, continue downward with the bar close to your body until you feel a slight pull behind your knees. Then begin the motion upward, squeezing the glutes hard at the top. If you feel any fatigue in the lower back, you're not using your hamstrings enough.

You may think you've got strong hams if you've only been doing RDLs for a few years. The glute-ham raise (GHR) politely requests you reconsider your opinion, tough guy. Yeah, it's one of those kinds of movements.

If you have a GHR bench, great. If you don't have a GHR bench, you can still get plenty of benefit from kneeling on the ground, having someone hold your ankles, and raising and lowering yourself to the ground using only your hams. In a pinch, you can also use a decline ab bench with your calves stuck under the foot rests. Depending on whom you ask, this is either called a natural glute-ham raise or a Nordic ham curl.

No matter which variation you choose, or what you call it, this movement is nowhere near as easy as it sounds. So use your arms or even an elastic band for assistance as needed. The key to these is making sure you keep your legs straight throughout the movement—again, keeping the knees soft, not locked—in order to activate the entire length of the hammies.

Next on the menu are hip thrusts. Sit on the floor with your knees bent and your feet flat on the ground. Place your shoulder blades on the long side of a flat bench. Place a weighted barbell across your hips, and rock your hips upward, squeezing your glutes at the top. Lower the hips down, and repeat. You'll probably feel the burn more in your glutes than your hips here, but they actually demand just as much from your hamstrings. 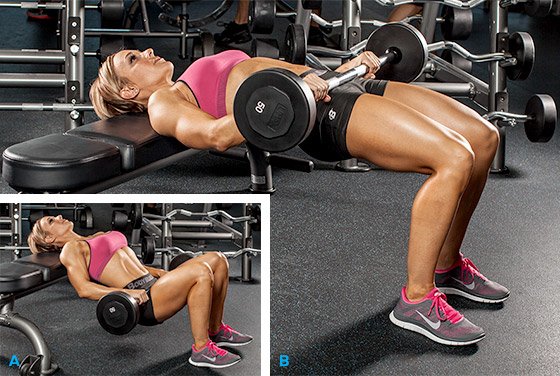 
I know, these look kinda funny in the gym, but they're getting more popular all the time. And anyway, are you there only to get accolades from your fellow gym rats, or to kick ass when you're competing? Thought so.

You can stop with those big three and rest assured that you've done a yeoman's job in service of your backside. But if you're looking to stack on even more volume, then make a date with your massage therapist and venture bravely onward into these three extra movements.

Yeah, these can really pick up a fitness girl's glutes, but when done right, they can really blow up the effectiveness of your hams. Keep the standing leg slightly bent, and move the lifting leg entirely at the hip—no knee involvement allowed! Also, make sure you keep your foot pointing downward during the motion. Many people allow an external rotation of the foot when bringing the leg back, which can be bad news for your knee.

I prefer the lying version of this movement because it allows a greater range of motion (ROM). It targets the hamstrings, with an emphasis on knee flexion. It also focuses on that entire posterior chain, where the strength resides. You can make these the centerpiece of your training, or toss in a few sets if you happen to like lactic acid for dessert. 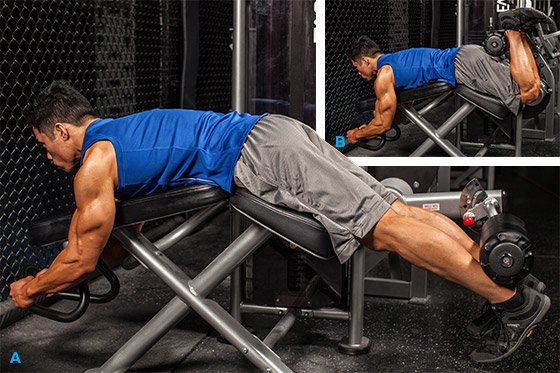 If you have access to a reverse-hyper (RH), then bonus. It's a really specialized piece of equipment. Unfortunately, only about 5 percent of gyms have one, so don't worry if you don't. I know some "gurus" think that RHs are the be-all, end-all for hip extension development, but in my experience, they're not. I've seen guys load them up like a dinner plate at a buffet and swing them all over the place. But ask them to do an RDL, and they're lucky to handle 225. Moral of the story: RHs are a toss-in after the basic compound movements, like RDLs.

The key to performing a reverse-hyper is to not swing the weight like a freaking pendulum. The way some people throw the weight around on these, I'm waiting for a hamstring to shoot across the gym! Focus on controlled movement, just like any other exercise. Bring the weight up, squeeze the glutes, and lower it down.

Why don't people train their hamstrings more? Deep down, you know why. It's because there's no DOMS (delayed-onset muscle soreness) quite like hammie DOMS. It lingers for days, leaving you staggering through life and making your friends point and laugh. And if you embrace a plan like this for fully-developed hamstrings, you'll definitely hate me at first.

But take the long view! Remember, getting your legs stronger will help you with performance while helping lower the risk of injuries, and strong legs need to be strong all the way around. Don't let weak hamstrings be your Achilles heel. Make them your powerhouse, and dominate your game!