Las Vegas's bodybuilding population increased tenfold this weekend as fitness buffs from all over the world flew in to witness the 50th anniversary of Joe Wieder's Mr. Olympia contest. An important part of the night's festivities was an incredibly competitive Figure contest. Each woman looked stunning on stage, but it was Nicole Wilkins who added a 2014 crown to her already impressive list of Figure Olympia wins.

Nicole Wilkins came to Vegas with an absolutely perfect package. She was lean, hard, and wonderfully proportioned. She looked every bit as good—if not better—as she did last year. Her win tonight makes her the all-time winningest Figure Olympia champion. 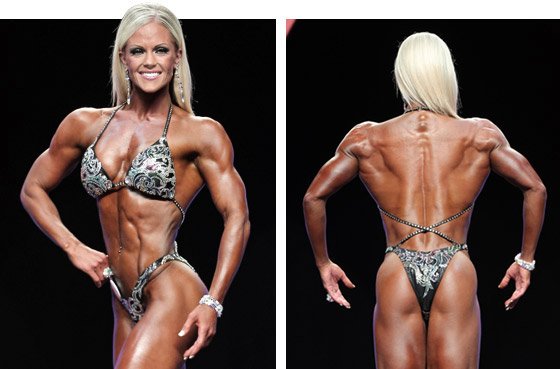 "Coming into this I wanted to make history, and I did," said Wilkins. She tearfully thanked her friends, family, and fans for all of the love and support she received throughout her journey. "Let's see if we can make it five next year," she said.

Candice Keene's second-place finish was a testament to just how good Wilkins looked. Keene's shape and conditioning were as good as they've ever been. It's just a matter of time before she gets out of the lower spots on the podium and up to the top.

Coming in third was Candice Lewis, who had her best-ever finish. Last year, she came in 9th. For the last few years, she's been climbing up the excellence ladder of the pro Figure circuit, and she's finally landed in one of the top positions. In 4th was Ann Titone, who came screaming up into one of the best spots all the way from 12th last year.

Latorya Watts was a new face in this super-fit lineup. She earned her pro card in 2013, and looks like she'll be a competitor to watch in upcoming contests. Rounding out the top six was Gennifer Strobo. Strobo took 8th last year and has had an excellent year of competition. She's nipping at the high heels of the women ahead of her.

In a fiercely tight battle between Juliana Malacarne and defending champion Dana Linn Bailey, the Brazilian Malacarne emerged victorious. Find out how it all went down!