In a lineup of seasoned IFBB Pros, only one lady could reign supreme. Oksana Grishina stood down last year's champ to earn the top spot!

This year's Fitness International competition showed that in physique competition—and especially when it comes to the fitness category—prejudging doesn't always translate to podium results. This morning, it looked like some combination of Regiane Da Silva, Tanji Johnson, and Bethany Cisternino would hold the top three spots this evening. But all three had to step aside and watch as crowd-favorite Oksana Grishina took the title.

Oksana herself appeared shocked when her name was announced, but she shouldn't have been. After impressive second-place finishes at both last year's Figure International and the Fitness Olympia, as well as a number of high-level victories, she was ready to take the next step. 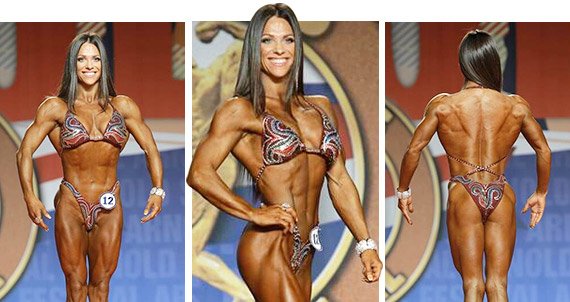 When it came to physique, Oksana came in conditioned but not too hard, earning her a spot in first callouts in the physique round—although her presence in the second callouts led some to believe she would finish around fifth. Her round shoulders and quad sweep were prominent but not overbearing, and she displayed great separation in her delts and back.

What set the Russian fitness veteran apart was the way she dominated the stage and won over the crowd and the judges with her outside-the-box pole dancing routine. She started dressed a gymnast and performed fast-paced moves that she paired with slower handstands. Midway through, she took things up a notch when she took off her suit to reveal a sparkly bikini for the pole-fitness portion of her routine. She performed a few twists and then showed off incredible strength by completing her routine by climbing to the top of the pole and sliding down with speed, only to stop three-quarters of the way down. The crowd went wild and, as she left the stage, the announcer simply stated, "I'm not worthy."

An overjoyed, teary-eyed Oksana accepted her trophy from Arnold and mentioned that the win was especially tough for her because she had to learn pole dancing from scratch. This was one case where hard work definitely paid off.

The Best of the Rest

Regiane DaSilva from Germany took second. Wearing a pink, black, and white skirt-pants combo, she flipped and twisted her way through her routine. Her performance earned its customary rave reviews, but unlike at the Olympia, where her physique held her back, her clean lines and improved definition led her a finish near the top of the pack. It was clear that her background in aerobics added energy to her performance. 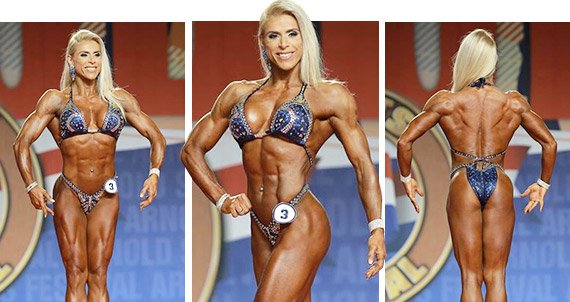 Last year's winner Tanji Johnson came in hot off of her win at the 2013 Arnold Classic Europe, and many had her tabbed to win here. Tanji is a formidable competitor who came in with a tight physique that looked both muscular and feminine. Her routine, energetic as always, was an ode to the Seattle Seahawks. From her jersey to her knee-high socks, she was decked out in neon green and blue; she even came out with a football. The crowd loved her energy and her finish of throwing out bags of Skittles. It was a sweet routine, literally.

Bethany Cisternino took fourth. Tonight was her fifth time taking the stage at the Arnold, where she has become a common sight in the top four, although this was a step down from her third-place finish last year. As usual, her conditioning was on point, which put her among the first callouts for the physique round. Her routine helped cement her spot among the top finishers. She danced memorably to "A Little Party Never Hurt Nobody" while wearing a black, fluffy skirt.

Trish Warren continued to be a huge inspiration to fit-minded mothers everywhere. While her fifth place finish is a step down from last year's fourth-place showing, she proved that she is still a contender. Trish brought a tight, toned core and great symmetry to the stage. Her performance to Trick Daddy's "Let's Go" was fast and energetic.

As she did at last year's Fitness International, Ryall Graber nabbed sixth place. She's been a pro since 2009, but came into her own this year and is off to a strong start with first place finishes at both the Toronto Pro Supershow and the Arnold Classic Brazil. Today, she continued to climb the ranks. She nailed her poses, which emphasized her defined abs and muscular quads. She also wowed the crowd with her fitness routine, which has been lackluster in past years. Wearing a bubblegum pink outfit, she partnered fast-paced flips and kicks with slower, strength-focused handstands.