Vote now for your chance to help pick the winner of the 2011 Olympia Webcast Fan's Choice Award, sponsored by MuscleTech!

Fan's Choice Online Voting - During the live 2011 Mr. Olympia webcast, fans who are watching will have chance to vote on their favorite competitor. The competitor with the largest percentage of the votes will be named the 2011 Olympia Webcast Fan's Choice Award winner. Place your votes below to decide the winner!

This online voting event has been very successful each year and continues this year with a trophy and cash prize being offered. The winner receives a $1,000 check from MuscleTech and a handsome trophy for his mantle! 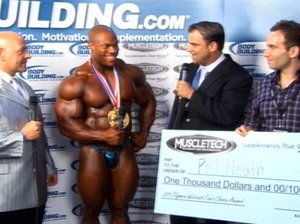 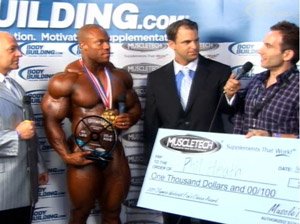 Phil won the voting with over 40% of the tallies.
He receives a check for $1,000 from MuscleTech,
and a handsome trophy to commemorate the occasion!

Thanks for voting, everyone!