Can you imagine how excited I was, planning my trip to the Arnold Classic in 1995? It was my first trip to the United States... Here's my account of the show, including bodybuilding results and much more. 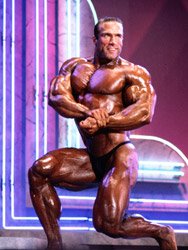 Click Image To Enlarge.
Mike Francois At The 1995 Arnold Classic.

Little did I know that I was flying to one of the most miserable places in the United States, Columbus, Ohio. Not only was it cold enough to freeze the nuts off a brass monkey but also there was absolutely nothing to do outside of the Fitness Expo.

I would like to say that things have changed over the last 13 years, with Columbus becoming far better on the entertainment scene. Thanks to some of the big supplement companies organizing after parties, the fun is not all over after the shows ended.

Back in 1995 there was the VIP banquet which was a great place to see your heroes let their hair down and get down and boogie. I remember seeing Arnold busting some moves on the dance floor and thinking to myself, that's my hero dancing like my old man (father).

Between Friday and Sunday, the Arnold Schwarzenegger Classic was held for the seventh year at the Veterans Memorial, Columbus, Ohio. Historically, the event was chosen by Arnold following his 1970 Mr. World victory at the same venue. This was when he met his now partner in the AC and great friend, Jim Lorimer. In fact, Arnold celebrated this friendship during the show by presenting a magnificent bronze statue to Mr. Lorimer on stage.

This year's show included a 2-day Fitness Expo on the Friday and Saturday, the second Ms. Fitness world, the Ms. International, The Arnold Classic for men, followed by a VIP banquet and finally a day of seminars on the Sunday.

The expo started at 10:30 a.m., finishing at 6 p.m. It was very well attended, particularly on the Saturday and for $5.00 the visitors were treated to a huge array of displays including clothing, supplements and equipment.

More importantly, for most attending, it was a chance to meet, buy signed photos of, and pose with every top professional bodybuilder on the planet. These included, Lee Haney, Dorian Yates, Porter Cottrell, Lenda Murray, Sharon Bruneau and many more too numerous to mention.

With all these stars about, it was ironic that the biggest stand by far was selling posters and magazines showing scantily dressed bikini models. (I keep telling my wife that sex sells, but she won't get her kit off for any amount, well not for the $10. I keep offering her).

There was something for every body's taste. Throughout the day, two stages (the main stage being compared by the beautiful Anja Schreiner) displaying such diverse entertainment as martial arts displays, Manfred Hoeberl showing feats of strength (and 26" arms) and posing routines by a ripped Diana Dennis. 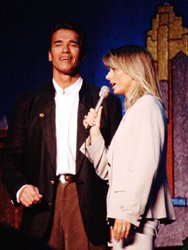 The main stage was also the location for the Ms. Fitness World pre-judging event. This section included the ladies making a speech to the audience while dressed in evening wear (thank god they no longer have to do this round in the IFBB), and secondly a bikini-clad symmetry round.

During this section they are instructed through quarter turns, no flexing of muscles is allowed. It should be noted that the head judge in this competition was the ageless beauty and former Miss Olympia, Carla Dunlap. 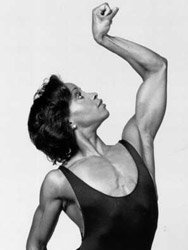 Round one was the symmetry round where the competitors from all corners of the world came together.

This must have been a particularly difficult task as most men in this competition had great if not perfect symmetry. Round two was the compulsory poses. Each competitor came out in turn and gave their all in the set compulsory poses. Then they where called out in the following groups of three.

Here were the callouts in order:

Both the women's and men's events were well presented by the men's event commencing at 9:00 p.m. It's fair to say that the men's contest was a much more close-run thing, with the eventual top seven all being in very good condition.

Taking first place was local Home boy (Columbus resident) Michael Francois. He was the biggest and in great shape, and prior to the top six being announced, was presented with the most muscular man in the show award, presented by the one and only, Franco Columbo. It happened to be Mike's 30th birthday on that day (unfortunately, not being able to celebrate his win or birthday as he was competing a week later at the San Jose Pro Invitational). 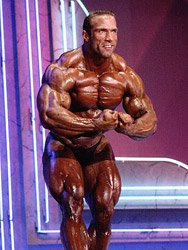 Click Image To Enlarge.
Michael Francois At The 1995 Arnold Classic.

Second place went to the 1993 Arnold Classic Champion, Flex Wheeler. Flex returned to the stage after having a near fatal car accident. His superb shape and condition earned him a second place, but he lacked the size we have previously seen particularly in the legs. Still a fricking awesome comeback.

It was great to see one of my countrymen, Charles Clairmonte taking third place. He was in excellent condition and used nice flowing movements in his posing routine. Along with Flex, I think these two physiques are by far the most symmetrical and classic looking physiques on the scene (except for mine of course).

Fourth placed - Andreas Munzer. He was his usual ripped to the bone self. However, this time he has packed on a bit more size where it counts. And the boo's from the audience when his position was announced showed that they thought he should have placed higher. This must have been his highest placing in a pro show. 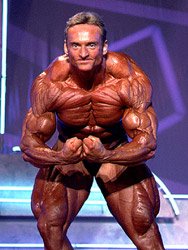 Click Image To Enlarge.
Andreas Munzer At The 1995 Arnold Classic.

The veteran, Lee Labrada was given fourth place in his last pro appearance as his retirement was announced at the show. Lee has placed in the top four at the Mr. Olympia for seven years and must have been disappointed with his final appearance.

His posing routine was by far the best, and on Sunday during the seminar, Lee Haney stated that Labrada was the only one who had put an effort into his routine, which in my opinion was a little harsh.

Aaron Baker's sixth place was greeted by the loudest boos of all (In my eyes, Aaron was never really judged fairly after his return from the WWF). He was in great shape and his back was probably the best on the stage. 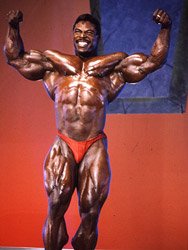 Click Image To Enlarge.
Aaron Bakers At The 1995 Arnold Classic.

Another crowd favorite was Ian Harrison from England. Ian's posing routine was greatly influenced by another mighty Brit, Dorian Yates. Not a great idea as Dorian was not renowned for his great posing, not in my eyes anyway. Ian was in the best shape of his life and dwarfed most of the other competitors.

I have to say that David Dearth, who was a little smooth, caused me the greatest problems. As he came on stage, his routine was dedicated to his mother. He then posed to an awful slow number about being proud to be an American. People all around were reaching for their sick buckets!

As mentioned earlier, Lee Haney was fairly scathing about the posing in this competition. Maybe someone with Lee's record can be, but it was not so much the quality of the posing but the fact that nearly every contestant chose slow, ponderous routines to classical music, and to be frank, it became boring.

Variety is the spice of life, or so they say. One or two attempts to liven the crowd up, Flex came about the closest to doing so. How I longed for the 'Mighty Mike Quinn' style crowd-pleaser, but alas it was not to be.

Don't get me wrong, I think some of the best routines ever seen have been "gentle and slow" (Bob Paris posing to Tracey Chapmen's "Sorry", has to be the best ever routine) however, on this occasion they were so similar they became tedious. Even the final six pose down was a very tame, polite affair.

What ever happened to the good old days of pushing and shoving for the judge's attention (but more importantly, to get the audience going!)?

As ever, Arnie presented the winner trophy, and once more the biggest crowd pleaser - and receiving their second well deserved standing ovation - was the circus act and half-time entertainment extraordinaire, the Alexis Brothers. The cheers for these boys even outweighed those of the hometown boy winning such a big event - Wow!

The evening banquet was held at the Columbus Convention Center, which was less than a mile away. VIP ticket holders had the choice of making their own way there or catching one of the many shuttle buses parked outside the Veterans Memorial Center.

The banquet itself had a buffet style service and then a free-for-all for the tables and a seat. It's fair to say that the banquet was the highlight of the weekend for the VIP ticket holders (including myself). It was a chance to mingle with your favorite bodybuilding stars and to drink, dance and be merry.

It's hard to imagine going for an evening out and being on the dance floor with Laura Creavalle to your left and a sensational Sharon Bruneau to your right. To top it all, it was great to see and speak to Dennis Newman, who had not long before gone under treatment for a serious sickness. He was in great spirits and appeared to enjoy the evening immensely. Hopefully he will be back on stage again one day.

The Sunday seminar commenced at 9 a.m., starting with Arnold talking about training and the old days. He has a sharp wit and had the audience transfixed. During his talk he brought on his good friend and old training partner, Franco Columbo. 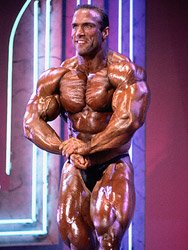 Click Image To Enlarge.
Mike Francois At The 1995 Arnold Classic.

There is no doubt that the Arnold Classic is getting bigger and better every year. Looking back on it know, it was far more related to bodybuilding in those days (I think I got to meet all of my hero's over the weekend. There seems to be less pro bodybuilders on the stands these days) and not like it is now, where every sport you can imagine is involved.

I can't wait until they introduce darts so Kris Gethin and I can show everybody how good we are at our national sport. I keep telling Kris that he would make a better Darts champion than a bodybuilder. LOL!

The finale for me was having my photo taken with my hero, Arnold Schwarzenegger... Not! I didn't know what to expect but I was a little disappointed as my Polaroid was blurred and resembled a shot taken at Madam Tusssauds wax works. I was also hoping to have a chat with the big guy, but instead I was told not to talk or try and shake his hand, bummer!

Photos and text by Gary Phillips