StrongLifts 5x5 is one of the most popular strength programs on the web, but is it right for your goals? A strength expert reviews the pros and cons of this wildly successful protocol!

There are two ways to approach your workout on any given day: You can walk in and follow a random approach, which likely means training as hard as you can for a certain number of exercises, or you can follow a preplanned program in which exercises, intensity, and volume are intelligently manipulated over time. Pick the right program, and you can make significantly more progress, with fewer injuries, rather than simply pushing yourself as hard as possible day in and day out.

There are plenty of sound training programs out there, but one of the most popular is called StrongLifts 5x5. Folks all over the world are giving this simple program a go. Like any program, it has pros and cons, but is it the right program for you? As a professional strength and performance coach, I'm here to help you make that decision!

With StrongLifts, the trainee performs just five multijoint barbell lifts per week: the deadlift, squat, bench press, overhead press, and bent-over row. It's a three-day-per-week program that employs an A/B split, which means there are two different workouts (Day A and Day B) alternated throughout the training week, with a rest day between each training day.

Day A lifts are the squat, bench press, and bent-over barbell row. Day B lifts are the squat, overhead press, and deadlift. Obviously, you're squatting each time you train. Each lift is performed for 5 sets of 5 reps except for the deadlift, which is only 1 set of 5. That may seem strange, but according to the StrongLifts website, doing more would beat you up excessively, and squatting three times a week will build many of the same muscles that are used in deadlifting.

None of these sets are taken to failure. This isn't a bodybuilding program, but one designed to increase strength by training in a relatively low rep range. Your goal is to increase the weight you lift by 5 pounds each workout for as long as you can.

Note that the 5 sets does not include warm-up sets. You'll do the 5 working sets with the same amount of weight for each set.

The 5x5 loading scheme is revolutionary to the new lifter who stumbles upon it, but the lifting world has been using 5x5s for decades. The late Bill Starr popularized 5x5 training in his 1976 book, "The Strongest Shall Survive: Strength Training for Football," although bodybuilder Reg Park reportedly first wrote about the technique in the 1960s.

Since lifting's golden age, when the only difference between bodybuilding and powerlifting was diet, athletes and lifters have been doing 5x5s to build bigger, stronger frames. So while StrongLifts 5x5 may be a program worth considering, the concept isn't entirely new.

Nuts And Bolts Of The 5x5

The program's loading begins with 50 percent of your 5-rep max for each lift, which means that you have to know (or discover) what weight you can do for 5 and only 5 reps, then use half of that. That might seem awfully light early in the program, but you're going to add weight each week.

In fact, during each workout, you add 5 pounds to the bar for each lift—or 2-1/2 pounds per side. The deadlift is the only exception—here you add 10 pounds, or 5 per side. Add weight, however, only if you reach 5 reps for all of your sets (again, just 1 set for deadlifts).

That's about it! The program continues with this simple progressive-overload scheme until you fail before knocking out 5 reps with a given weight. The strategy is then to use the same weight for your next workout instead of increasing bar weight.

Failure to achieve 5x5 with a given weight for three consecutive workouts calls for a deload, which means you decrease the weight by 10 percent for your next workout. This deload, however, is only employed for a single workout, not an entire training week. You'll then dust yourself off and try again. Keeping meticulous records of your weights and reps is important for tracking your progress.

The StrongLifts 5x5 protocol has a number of positive attributes, especially for beginning lifters. It's simple, which is important. Beginners often want to inaugurate their training career with a overly complex bodybuilding-style regime, or some ritualistic Eastern Bloc strength cycle. No matter the goal, complexity is actually the beginner's enemy.

Simplicity is infused into the program in several ways. For one, the trainee knows exactly how many days per week to work out, and exactly which exercises to use on each training day. There's no guesswork. A simple bit of math allows the lifter to plan training weights for weeks in advance, again saving mental energy.

It's 5x5, or 1x5, with five lifts, three times per week. It's cognitively liberating!

Simplicity preludes practice. Since the program uses only five lifts, and three of them are done three times per week, there are a lot of opportunities to practice becoming a good lifter. Frequency of practice—good practice on these core lifts—is paramount for beginning-level lifters.

The positives continue with the emphasis on building strength. Even if a newbie's eventual goal is to become a muscled colossus, strength gets a body big faster. You'll build a bigger, stronger foundation with this kind of approach.

Finally, the program is devoid of fluff or machines. It says, "Let's load a barbell, train hard, and go home." Folks' lives outside the gym are often full of sitting and consuming. StrongLifts 5x5 gets people on their feet—no seated exercises or machines—and trains you to lift heavy.

Disadvantages Of The Program

The simplicity we championed in the above section can also be viewed as a negative, albeit from a different perspective. Intermediate and advanced lifters typically need greater training complexity to make continued gains. This could mean exercise variations, or it could mean how the exercises are loaded. Continually doing 5x5 and adding 5 pounds per workout won't work for gentlefolk who are already able to rock a barbell.

Lifters beyond newbie status also need increased training volume to gain size, and StrongLifts doesn't offer that volume, nor does it offer enough intensity to make an already strong lifter stronger. Eventually, a lifter must crank out sets of 3, 2, and even 1 rep around 90 percent of their 1-rep max—and above—to get stronger.

Some of the exercise reasoning may also be too simple. For example, the program explanation states that there's only one deadlift set because deadlifting is too taxing, and deadlifting more than programmed is detrimental. The program creators argue that squatting, instead, will improve your deadlift, because it trains the same muscles. This isn't necessarily true.

Squats and deadlifts are different movement patterns, requiring different ranges of motion from muscles and joints. This means the nervous system approaches each differently, so one doesn't necessarily make a lifter better at doing the other. It's true that each exercise recruits similar muscles, but in dissimilar ways.

StrongLifts 5x5 is a great beginner's program, but may not be a great choice for intermediate and advanced lifters. Simplicity and practice pays off for the less-experienced individual, but lifters already aged with iron need a bit more programming complexity to make continued gains in size and strength.

For an intermediate-to-advanced lifter looking for the same cognitively liberating simplicity, but with loading parameters that build strength, I'd recommend the Texas Method or 5/3/1. We'll tackle those programs in the near future and see how you can use them to maximize your strength gains! 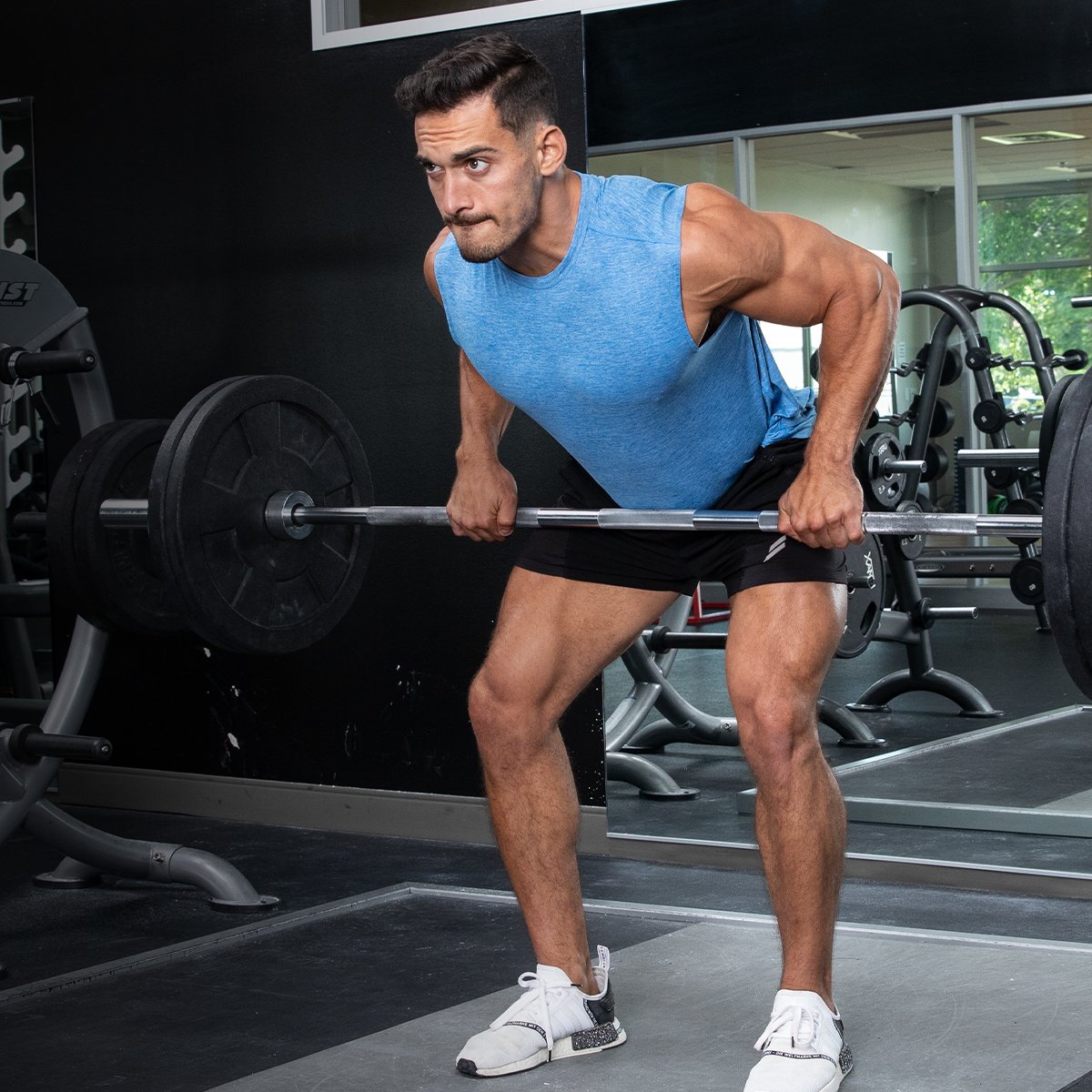 5x5 For Muscle and Strength: The Program
Follow this full program in BodyFit Elite! You’ll get a customizable workout tracker and app, with demonstration videos for all movements. Earn free shipping and store discounts, plus access to 70+ additional programs!