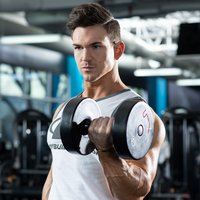 From the beginning, Abel Albonetti had aesthetics in the forefront of his mind—and, of course, the will to be bigger and stronger than his friends. He began consistently training at home in his basement gym, and once he started seeing results, Albonetti had a self-diagnosed addiction to pumping iron.

Over the years, he has built a career in fitness modeling and has appeared on the cover of several fitness magazines. The doors were opened to him to meet people all around the world and he now shares what he has learned from his own training and nutrition experiments on social media.

Albonetti has contributed countless workouts and full training programs to Bodybuilding.com, making a name for himself with his brutal high-volume training style, killer abs, and relentless dedication and passion for fitness!

Gain access to Abel PLUS over 50 other expert-designed fitness plans.
Start your 7-day FREE trial!