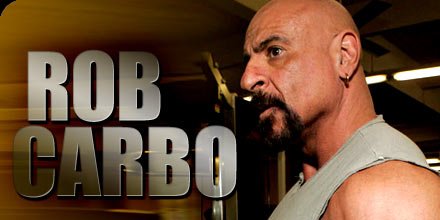 Standing 5 feet 9 inches, weighing 240 pounds and sporting a freshly shaven head, Carbo resembles one of those men on ESPN's World's Strongest Man competitions. He looks fully-equipped to either pull a train behind him for a half mile or lift 20 oversized kegs over his head in less than a minute.

"I've been lucky, my body responds really well to weight training," Carbo says. "I have to thank my parents for such good genes."

Carbo's love affair with pumping iron began in 1972, when a gym class at his New Jersey high school introduced him to weight training. But at the high school level, Carbo mostly stuck to basketball, football and boxing.

After high school, Carbo got into the bar business, and was left broke and unfulfilled. "I needed an income; I was tired of living paycheck to paycheck," he remembers.

So Carbo made the decision to turn to his true passion. After meeting powerlifter and strongman Bill Kazmaier, who now lends his voice and analysis to the World Strongest Man program, Carbo was inspired to make it as a powerlifter. Carbo now hits the weights hard trying to make his own mark on the sport of powerlifting.

Powerlifters typically lift at heavier weights than bodybuilders, says Carbo. But his first professional efforts were in the realm of bodybuilding.

He decided to enter his first bodybuilding competition in 1998 at the age of 43. Carbo admits he wasn't prepared for the event. He trained hard for a return in 1999, when he placed third.

It wasn't until 2000 that Carbo started making a name for himself in powerlifting circles. After some coaxing from friends, he reluctantly entered his first California State Championship in San Francisco at the age of 45. He competed in the men's masters category, and bench pressed 355 pounds, squatted 525 pounds and dead-lifted 500 pounds. Though it wasn't enough to take home top honors, it further fueled his passion, and he would return for the next four years to dominate the competition.

It was in 2001, however, that Carbo decided to revive his college football career in a storybook-type return.

"I played the safety position in college and high school, but that was almost 25 years ago, so I wasn't sure what to expect," he says. "I had a few friends from [Monterey Peninsula College] convince me to give it a shot. Some aspects of the game were familiar and some were significantly tougher than anticipated.

"The hitting was the same. I think I was the strongest kid on the team," he laughs.

While his season was cut short by a severe hamstring injury, Carbo says he looks back fondly on the experience.

And after a chance meeting with Hall of Fame slugger Reggie Jackson in downtown Monterey, another unique opportunity presented itself. The two became friends and Carbo has been doing personal security for Mr. October ever since.

"I get really inspired by Reggie Jackson for his athleticism and his professionalism," he says.

At the 2005 State Championship held March 5 at the Monterey Beach Hotel, Carbo bench pressed a whopping 518 pounds and retained his crown as king of the bench press. He's now second in the world in his age group.

"I enjoy working with people and seeing people reach their goals, and as I get older, I'm getting a thrill out of working with athletes," he says.

Carbo is not one to rest on his laurels. He is plotting yet another return to the gridiron, working on capturing the world bench press record and writing a fitness book.

"Maybe I'm biting off more than I can chew," he says, "but if I could pull this off, I'll be on Leno by the end of the year."