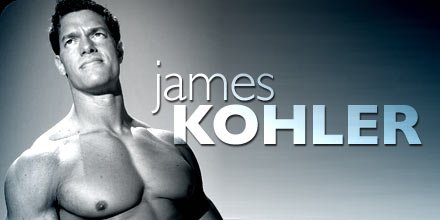 James Michael Kohler was not born with the body he has today, he had to work extremely hard to get to the level where he is now. He was born and raised in a small town of Wisconsin off of Lake Michigan called Port Washington. James and his twin brother were active kids and played various sports- cross-country, football, basketball and soccer. They were often teased for how skinny they were though. James started in martial arts when he was fourteen and quickly advanced to black belt status in Tae Kwon Do. He says he owes a lot of his discipline and determination to this individual sport.

At fifteen years old, James became the Wisconsin State Champion of Tae Kwon Do with a mere 125-pound frame. He wanted to begin working out with weights to build size and strength for competing at future tournaments. Back then, he had no idea as to what to do. The Kohler twins had a book by Bill Pearl and some weights in their basement. James started training on his own until he met a local man known for his supreme and masculine build. A deal was made. He would teach Kohler how to train with weights correctly in exchange for teaching the man Tae Kwon Do.

It wasn't long before he started noticing changes. During the first year of training James gained a solid 25 pounds of muscle. His body responded very quickly and he knew that he had found his passion. Kohler became obsessed with working out and wanted to learn more each day. He then discovered Arnold Schwarzenegger's Encyclopedia of Modern Bodybuilding at a bookstore. It opened his eyes to sport of bodybuilding and he became fascinated with it. James decided to no longer compete in Tae Kwon Do and focused on bodybuilding at sixteen years old.

He began to workout religiously and even took protein shakes and sandwiches to high school so he could eat between classes. People began to notice changes in his physique and complimented him on his progress. It fueled his workouts even more and he strived to make improvements on a continual basis. By the time James graduated high school he weighed 215 pounds and had 18-inch arms. Classmates respected him for his transformation.

James continued on with his bodybuilding regimen and made improvements in size and conditioning. He competed in six more bodybuilding competitions throughout his college studies at the University of Wisconsin Milwaukee. After competing in several different organizations, he decided to train for the Mr. Wisconsin contest again in 2004. Kohler became the crowd favorite that night and easily won his weight division.

In November 2005, he entered the Musclemania World competition in Hollywood, CA. There were hundreds of athletes from all over the world competing there. Bodybuilders represented such countries as Italy, Argentina, Japan, Germany, Hungry, Mexico, Canada, South Africa, France, Bahrain, New Zealand and many others. James wasn't sure how he would stack up against the competition on stage.

He ended up realizing a lifetime goal; he earned a pro card in bodybuilding. James is now a professional with Musclemania and will be competing again this November. He continues to make progress in size, symmetry, and conditioning.