The Real Reasons Arnold's Physique Was Ahead Of Its Time

Arnold was able to get huge back in the day because of the tactics he used while training. Learn right here how he used cheat curls and other exercises to get huge even by today's standards.

Reading about the workouts Arnold did back in the '60s and '70s is inspiring, but did you know there are loads of hidden secrets in those past routines that most bodybuilders never grasp?

We believe specific muscle-training tactics he used, either by instinct or by design, are the very reasons Arnold was the biggest bodybuilder of his era and why his physique in its prime is still outlandish even by today's freaky standards.

For the most part he was instinctively doing a lot of little things precisely right, and those details paid off big! (Some say he was even splitting muscle fibers, which is entirely possible, as you'll see in a moment.) For example, he knew how to overload the muscle at the exact spot where maximum force can occur, the point along the stroke where muscle fibers are perfectly aligned for extreme fiber activation.

It's one reason his arms were spectacularly big, full and peaked-and you should follow his lead to make your arms and other muscles more massive.

If you've read anything about his biceps training, you know that cheat curls were one of his favorite size builders. No, he didn't invent them, but he sure made them popular. He used to start his biceps program with them, heaving up massive poundage's.

Sure, a lot of people chastised him, saying he wasn't training biceps, only his lower back, but lo and behold, his biceps had sky-high peaks that made the Alps look like molehills (okay, not quite, but you get the idea).

Now, you could contend that those who belittled his cheat curls had a point. After all, Arnold did a lot of other biceps exercises too, so cheat curls may really have been training more of his lower back than his arms-but we don't think so. We believe those cheat curls may be one of the key reasons his biceps got so incredibly full and peaked. Why?

It's the max-force generation point we mentioned earlier-that's the place on an exercise's stroke at which the target muscle can generate the most force-and more force equals more mass.

That point, say many scientists, is the spot where the most muscle fibers are stressed to the max because they are perfectly aligned for action. So if you overload that max-force point correctly, it's where the most growth stimulation occurs.

Where is that sweet spot on the curl's stroke? Right below the point at which your elbows are bent at 90 degrees, between the bottom and the midpoint. (There has to be some stretch in the muscle for ideal fiber alignment and therefore max-force production; in fact the closer you get to full contraction, the less force you can produce because of fiber crowding and bunching.)

Now imagine Arnold doing a cheat curl. He would lean forward, bend his arms slightly and heave the heavy barbell to his shoulders. Almost all of the overload occurred right at the max-force point-between the arms-straight-position and the midpoint (see the photo).

In fact, there was hardly any resistance on his biceps any place else along the stroke. Interesting. Semistretched-position overload. Could that be why Arnold's biceps were so majestic and he swore by cheat curls as his biceps mass exercise? It could be one of the biggest reasons.

But aren't cheat curls dangerous? Absolutely. In fact, more people probably get injured doing them than develop big biceps from the movement-but there is a solution.

Instead of doing barbell cheat curls, try cable curls. (Hold on, there's more to it-and you don't heave the weight.) First do as many strict reps as you can, shooting for 10 reps. 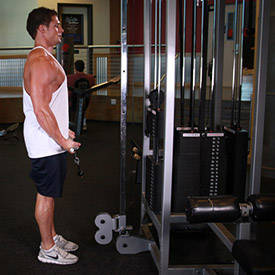 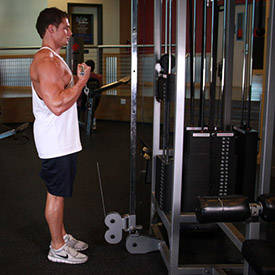 When you can't do another full rep, pull the bar up to the sweet spot, right below the midpoint, and do short partial pulses till you can't stand the burn. Those X Reps will overload the key max-force point without endangering your lower back.

Why do you have to use a cable instead of a barbell? Because a cable produces more uniform resistance, without the bottom-of-the-stroke leverage issues of a barbell. (Try X-Rep power partials at the end of a set of barbell curls and you'll see what we're talking about. Impossible due to extreme resistance variations.)

So was max-force-point overload all there was to putting the freak on Arnold's peaks? Not quite. While cheat curls attacked the semistretched point, he also favored stretch-position overload. For biceps that meant incline curls. 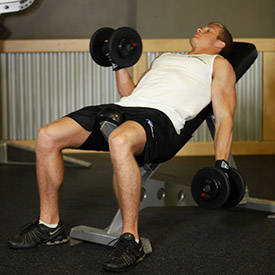 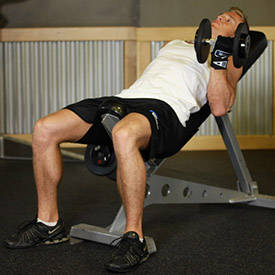 By reclining on a 45-degree incline bench with a dumbbell in each hand, at the bottom of the curl his biceps were in an extreme elongated state. He would fire out piston-like reps, keeping tension on his biceps throughout the stroke and blasting out of the fully stretched position-but without heaving or jerking.

It's interesting to note that recent studies have linked stretch overload to hyperplasia, or fiber splitting. One animal study triggered a 300 percent increase in one muscle that was subjected to stretch overload in only 30 days. Yes, that's tripling the size of the muscle, and the researchers suggest that a lot of the massive increase was caused by fiber splitting, as evidenced by muscle biopsies!

Could stretched-position overload along with max-force-point attacks be Arnold's secret weapons for incredible biceps mass? It sure looks that way, but it wasn't only his biceps that got the freaky kick from stretch overload.

Another example of Arnold using stretch overload is his chest workout. One of his favorite pec movements was dumbbell flyes, but he had a certain way of doing them-only moving through the bottom third of the stroke. He lowered to the bottom stretched position, but on the upward stroke he stopped the dumbbells when they were about three feet apart, immediately lowering back to the stretch. Why? 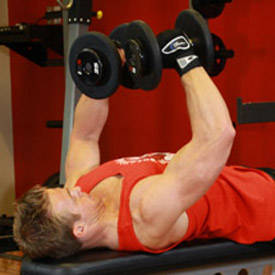 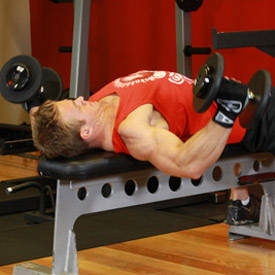 He said the short stroke kept tension on his pecs, which is true and important, but it also placed the most overload on his pecs when they were elongated, or stretched. Those partial flyes were really just rapid-fire X Reps on a stretch-position pec exercise-and no doubt one of the big reasons Arnold's pecs were so full and striated (more fiber splitting perhaps).

Arnold was a master at getting the most growth activation from every set. Here's another example: Calves. When he came to the U.S., his calves were lagging behind most of his other muscle groups-till he paid a visit to one of his idols, Reg Park, a former Mr. Universe winner and a man who was a big believer in overload.

Arnold was using a few hundred pounds on his various calf raises, but when he trained with Reg, he was amazed to see his mentor pile 1,000 pounds on the calf machine and keep grinding out movement until he could barely budge the gigantic load. (Oh, and by the way, Reg's calves were huge!) 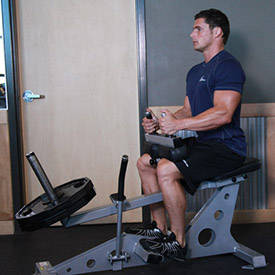 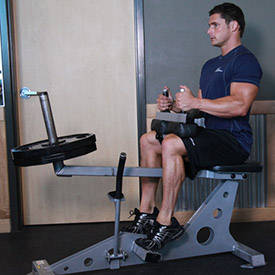 Arnold soaked up that information-and stunning visual-and immediately applied it. Soon he was using 1,000 pounds on his calf raises, and two or three guys on his back for donkey calf raises, a better stretch-position calf exercise than standing calf raises. But don't think for a minute that he stopped a set when he couldn't get all the way to the very top.

When he couldn't do anymore full reps, he would drive the weight up as high as he could, usually just barely above the bottom stretch point, and do partials till the muscle couldn't even twitch. It burned like crazy, but it worked.

Soon his calves were one of his best bodyparts (they were so good that some people accused him of having calf implants; wrong, he just instinctively knew how to train-with semistretched- and stretched-position overload).

All of that magnifies the fact that the stretched and semistretched positions of every muscle are very important for total mass stimulation. Scientists confirm that through force-generation/muscle-fiber-activation research. And who can argue with Arnold's results?

If you're neglecting stretch overload in the gym, it may be one of the biggest reasons you're not building more muscle faster. Arnold achieved semistretched- and stretched-position overload at almost every workout, and you should follow his lead (for the best stretch-position exercise for each bodypart, see The Ultimate Mass Workout e-book).

We've found that overloading a muscle at its semistretched point with X Reps-power partials similar to what Arnold used at the end of his calf raises and other exercises-can make each set two to four times more effective at building mass.

X Reps work so incredibly well because after you hit failure, you keep firing the muscle at its max-force-generation point, the key mass-building position, according to scientists. Arnold also instinctively knew to train every muscle in the fully stretched position for the fullest, most complete development possible.

Was he triggering hyperplasia, or fiber splitting? It's very possible. Anyway you look at it, Arnold knew what he was doing and achieved freaky mass, even by today's eye-popping standards. The bottom line: If you want extreme mass, you gotta go for semistretched- and stretched-position overload every time you hit the gym.