Leucine, a branched chain amino acid, is a protein stimulus gunslinger. Find out how it works and pull the trigger to build more muscle!

Protein synthesis is the creation of new skeletal muscle proteins. When this occurs on a large scale, it is known as skeletal muscle hypertrophy (growth), and it's the process by which our muscles get bigger. Before we dig into how to maximize protein synthesis and the unique role of leucine (a branched chain amino acid), let's cover a few basics.

Protein, Exercise And You 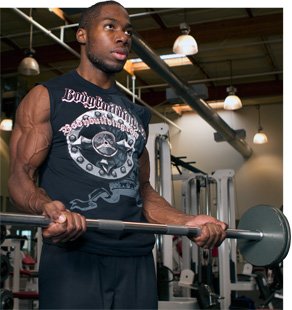 Resistance exercise is unique because it actually elevates skeletal muscle protein synthesis AND increases the rate of skeletal muscle protein degradation. The overall effect, in both cases, is a negative net protein balance 2. During resistance exercise (i.e. training with weights, bands, and/or other torture devices) your body goes into a catabolic condition; at rest, your muscles repair and increase in size. Kapow: Arnold arms!

That is, if you get enough post-workout protein. In order for protein balance to become positive post-workout, dietary protein—and specifically the amino acid leucine—must be consumed.

In fact, protein balance will remain negative until protein is consumed 3,4.

The Power of Protein

Anyone who has ever read a muscle magazine or talked to a meathead long enough knows that consuming a diet high in protein is one of the major ways to maximize muscle gain. That's because protein is essential for muscle growth. Protein is made up of amino acids, the ingredients that stimulate muscle protein synthesis. There are over 20 amino acids that occur in the dietary protein we eat, but not all of them have the same impact on muscle growth.

The amino acid leucine is the king of stimulating muscle protein synthesis!

Leucine is one of the three branched chain amino acids (BCAAs), and is unique in its ability to stimulate skeletal muscle protein synthesis. In fact, leucine has a several fold greater impact on protein synthesis than any other amino!

Though researchers are not sure exactly how leucine activates mTOR, it has been shown that mTOR is sensitive to leucine concentrations and activation of mTOR is strongly associated with increased protein synthesis, which means more muscle growth.

mTOR increases protein synthesis through two different mechanisms 8. It increases the rate that skeletal muscle proteins are translated (process by which genetic information is converted into protein), and it increases the production of different complexes in the protein-synthetic pathway, thereby increasing the body's capacity to stimulate skeletal muscle protein. So, not only does mTOR stimulation cause the body to create new muscle tissue faster, but it also increases the amount that can be produced in a period of time! Sweet!

Did I lose you? Here's an analogy: The contracting company mTOR is building a protein skyscraper. The machines (bulldozers, cranes, etc.) are the protein synthesis pathway components, and leucine is the cash needed to make the project work. When enough cash is available (increasing leucine concentrations), the contracting company can start building the skyscraper (synthesizing muscle protein) and also purchase more machines (increased synthetic components). This increases the capacity and speed at which mTor can construct the skyscraper (the muscle protein being synthesized).

To build protein skyscrapers (muscles) in our bodies, it's clear that leucine is a necessary component. The question, though, is whether it's beneficial to supplement with extra leucine, or if we get enough from a high protein diet? There is some evidence that supplemental leucine may be beneficial, even if one ingests ample protein.

As a free-form supplement, leucine gets absorbed into circulation much faster than when it's part of a whole protein. Even with a fast-digesting protein such as whey, it can take hours for the leucine to be liberated from the protein and enter circulation. Therefore, leucine concentrations in the blood never spike to high levels. An isolated leucine supplement, however, would be quickly absorbed into circulation, thus spiking blood leucine levels and drastically increasing intracellular leucine concentrations and activating anabolic pathways.

For those who are dieting but want to maintain maximum muscle mass, a leucine supplement may help alleviate some of the catabolic effects of a calorie-deficit diet. Leucine is more anabolic than other amino acids. While this hasn't been studied in detail, it might be possible to substitute something like 5g of leucine for 30-40g of dietary protein and still have the same or greater stimulatory effect on muscle protein synthesis.

Again, this is a hunch of mine based on current research and my own PhD work. With a leucine supplement, you may be able to maintain high levels of protein synthesis and knock an extra 100 calories off your diet. Can you say, "shredded?" (You don't have to say it. Just be it.)