In bodybuilding, the neck is a much under-emphasized body part. In fact, many bodybuilders do not specifically train the neck muscles at all and others tend to train neck at the end of a session, typically as an afterthought.

This seems misguided, as the neck musculature is important not only in a protective, spine-supporting, and posture enhancing sense, but also as an enhancement to ones symmetry. Symmetry-wise, a well developed neck lends an impression of Herculean power and enhances the appearance of the deltoid-trapezius tie in.

Functionally speaking, a strong neck provides stability in contact sports and during training sessions which engage heavy compound exercises such as squats and behind-the-neck presses.

Ideally, neck should be trained independently or directly following specialized abdominal or forearm/grip work, on days separate to major body-part training days. The great thing about neck training is that very little training equipment needs to be employed.

Most specific neck training exercises can be performed using manual resistance (added pressure from oneself or a partner) or with reasonably light weights.

Much more than a muscular column, keeping the head fixed to the body, the neck is involved in a myriad of functions. The side muscles that run the length of the neck (the sternocleidomastoid muscles), give the neck the appearance of width. The lower part of the sternocleidomastoid ties into the inner trapezius and provides muscle density directly above the clavicle bone.

The importance of training the sternocleidomastoid muscles, which originate from the sternum and clavicle, is far reaching as they help with cervical vertebra flexion thus allowing the upper spine to bend and flex. The sternocleidomastoid also helps with all aspects of head movement. The trapezius originates from the occipital bone of the skull and plays a major role in head extension. 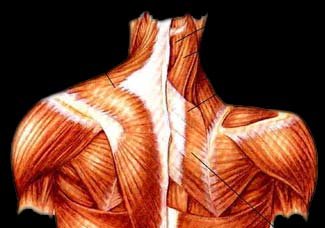 Developing this muscle is clearly advantageous for the bodybuilder as it ensures complete back development from the rear and a beautiful, symmetrical, look from the front. The semispinalis, longissimus and splenius capitis muscles underlie the trapezius and all assist head extension, along with the trapezius.

Developing these muscles will assist the development of the more obvious trapezius muscles and provide additional support for the neck.

The following exercises will develop all the above muscles to provide a strong, flexible, muscular, neck which will provide support for the head and allow flexibility and movement of the back.

With a neck training program, as indeed with programs for any other muscle group, flexibility, strength and relaxation should be the overarching goal. Before attempting neck exercises, stretching, should be undertaken. It is probably best to train neck independent to other body parts as the exercises illustrated demand complete concentration.

Also, if one trains neck with any other body part typically they tend to emphasize it less. In short, best results tend to occur when the neck is trained independently. Furthermore, the neck is prone to injury so possibly the most important reason for training it independently is the fatigue factor.

If one is fatigued they are prone to making a serious mistake. This is particularly so with the neck. An error when training neck could prove to be very serious.

Now that the neck is suitably warm we can proceed with developing exercises.

This exercise could be classed as the most productive and effective neck exercise available. It does, however, carry some risk if performed incorrectly. Given its risk, it would be wise to consult an expert trainer before attempting it.

Essentially it involves balancing ones upper body with the weight of ones neck and balls of the feet. Begin by lying, back to the ground, with hands placed palm down beside the head. Slowly lift upper body off the floor, keeping the back of head flat and straight against the ground.

Take hands away and remain in a fixed position. The neck bridge will primarily target the semispinalis capitus, longissimus capitus and splenius capitis muscles but will also secondarily target the sternocleidomastoid muscles.

This exercise remains the number one exercise for strength athletes wanting to develop the entire neck region. Remain in the bridge position for at least 10 seconds and increase this period from session to session.

Although less contraindicated than the neck bridge, manual resistance can promote

if done haphazardly. Manual resistance can be used to target all sides of the neck, thus helping to develop all of the major neck muscle groups discussed. 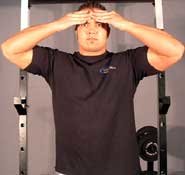 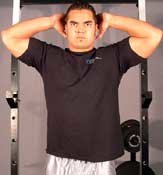 Place hands, or have partner place hands, against the front, sides and back of the neck and apply pressure. 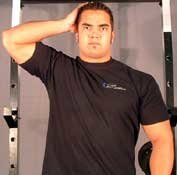 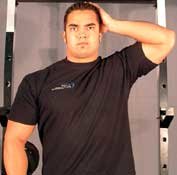 Resist this pressure with the neck. This exercise can also be done with a towel for added pressure (pulling as opposed to pushing). A wall can also be used to vary the angle of resistance. Maintain resistance for at least 15 seconds and increase this period each session.

, unlike the preceding two exercises, allows one to complete repetitions. It is widely though to be the best of the neck strengthening tools. The harness is best used for the back and the front of the neck, especially the back.

It will develop all aspects of the neck if angle of resistance is varied. If a neck harness is not available, a plastic coated plate (5kgs or so) will suffice. The amount of weight will vary, although it is best to begin with a light weight until form is perfected. Complete three sets of eight-12, for all four sides of the neck.

To work the upper trapezius region of the neck, the rhomboids of the upper back, and indeed the aforementioned neck muscles, the shrug can be employed. The shrug can be done with a dumbbell in each hand. However, probably the best way of targeting, more specifically and precisely, the neck and surrounding muscles is to use a bar and execute the movement from the rear.

This was a favorite of Mr. Olympia legend Lee Haney's and his neck and traps were impressive to say the least. Hold bar from the rear and raise up as high as possible. Bend elbows slightly if this helps, or if one has extra large glutes. Complete three sets of eight-12.

Upright rows assist complete trapezius development. Another exercise which carries a degree of risk. Impingement of the rotator-cuff complex can occur in those susceptible.

However, this is an excellent exercise that primarily works the trapezius. Use a narrow grip to target the trapezius and pull the bar up toward the chin and then back to throw the emphasis onto the trapezius. Complete three sets of eight-12.

Neck training can be quite strenuous, particularly as it can place a great deal of stress on the spinal region, which is overburdened to begin with as it supports us throughout the day and assists in all other exercises.

Therefore, the following can be employed:

This relaxation procedure can be done at the end of each neck training session to drain away stress and help promote muscle growth.